Watching the political stage in the United States along with other events occurring around the world can be pretty discouraging. It appears as though there is no possible outcome that does not end in disaster. I really don’t know how someone without faith and confidence in Almighty Yah survives.

Recently I picked up a book about the Biblical book of Daniel. I like reading different perspectives on prophecy. I’ve listed all of the information here, though I can’t really call this a complete book review. Nor can I make a recommendation, as I haven’t finished reading it yet. The author doesn’t give any indication of being “Messianic” or “Hebrew Roots” in any way. He was at the time of the writing of this book President of Geneva Reformed Seminary and Associate Pastor of Faith Free Presbyterian Church in Greenville, SC. And according to Wikipedia, he is now Academic Dean and Professor of Old Testement at Puritan Reformed Theological Seminary. Undoubtedly he is well studied in both the setting and language of the book of Daniel. 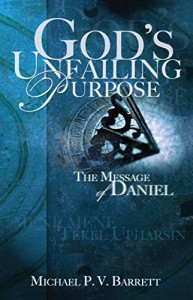 The book is available from Amazon as a paperback through third-party sellers or as a Kindle download. The Kindle book is only $0.99. Prof. Barrett has another $0.99 Kindle book, Beginning at Moses: A Guide to Finding Christ in the Old Testament, that I plan to read next.

As I started reading this book on Daniel, one portion of the first chapter grabbed me. I will reproduce it here as part of my “review” with the hope that it will encourage you as we face uncertain times ahead.  God is still in control.

While the Old Testament reveals the reasons for Daniel’s situation, the political history of the ancient Near East details the method by which God accomplished His purpose. Even a cursory survey of that history boldfaces the Lord’s absolute sovereignty over all the affairs of the world to accomplish His purpose. Although the then-current events had military and political explanations that would have engaged the news media of the day, they evidence over and again the truth of Proverbs 21:1 — “ The king’s heart is in the hand of the Lord, as the rivers of water: he turneth it whithersoever he will.”

…One final observation remains. The third element in Deuteronomy’s land contract concerned the return to the land. Jeremiah, who declared that the loss of land was God’s will, also announced God’s will to restore the land in seventy years. The execution of this return was just as much in God’s hand and control as the exile. For seventy years the world went on. Babylonian king followed Babylonian king until finally, in the normal course of human events, one regime replaced another. In 539 or 538 B.C., a coalition between the Medes (the former allies of Babylon) and Persians under the command of Cyrus defeated the Babylonians. This is the same Cyrus that Isaiah had named a couple of hundred years earlier, identifying him as God’s shepherd and God’s anointed, who would perform all of God’s pleasure by ordering the rebuilding of Jerusalem (Isaiah 44:28 – 45:1). At the beginning of his administration, Cyrus issued a decree that the peoples who had been exiled during the Assyrian and Babylonian empires, who were now scattered throughout his even larger kingdom, could return to their homelands. Cyrus even subsidized the rebuilding projects, a wise strategy to insure stability and peaceful loyalty throughout the vast Medo-Persian Empire. The exiles of Judah were included. At the precise moment when in the purpose of God it was time for Judah to return to the land, a mechanism was in place to effect that purpose. Let me pose this question: Where did Cyrus get the idea to let the exiles return? Remember Proverbs 21:1.

Although Cyrus and the Assyrian and Babylonian kings before him were ignorant of their manipulation by God and their role as the agents of divine providence, they were nonetheless subjects of God’s kingdom. God certainly held them accountable for their transgressions against His law and dealt with them according to their works, but not even the worst of them could jeopardize God’s agenda. The heart of every one of those kings was in God’s hand, and He turned it in whatever way He desired to accomplish His will. In hindsight, it does not require much spiritual acumen to recognize God’s amazing control over the nations of the Old Testament world. So let me pose this question: At what point in the history of world did God stop controlling the nations of this world?

In our hearts we know the biblically correct answer to this question. In our heart of hearts we know that God controls governments and the course of human events as much today as ever. Yet so often we live as though God at some point in history abdicated His throne in exchange for a bleacher seat. Too many Christians live as though God is pacing back and forth in heaven wondering what He will or can do if this or that political party gains power. At the very least, that is not a biblical view of God. Indeed, correcting this faithless notion is the issue of the entire study before us. But it is enough at this point to state that the times of Daniel make it clear that God governed then, and the message of Daniel makes it clear that God governs now and forever. Everything is still under control.