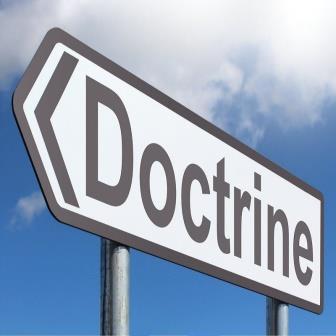 Many religious organizations publish a Statement of Faith or some similar list of beliefs that describe what they hold as essential to maintaining unity of fellowship among members. By examining the Statement of Faith, one can determine how much they may have in common with a particular group. Or perhaps it can be used to identify sect or denomination characteristics.

If someone wants to just be identified as a follower of Messiah Yeshua, what doctrine is essential? Who makes that determination? Did Yeshua himself have anything to say on this subject?

Before trying to identify essential doctrine, we need to understand what is “doctrine” in a general sense. In its simplest form, a doctrine is something that is taught. According to the American Heritage Dictionary, the origin is Middle English, from Old French, from Latin doctrina meaning “teaching.” Because word usage is constantly changing (the current American Heritage Dictionary lists the meaning “something that is taught” as archaic, as opposed to the same dictionary from my college days in 1982 where this is the primary meaning), many use Webster’s 1928 Dictionary as a standard or benchmark. It says:

Doctrine: In a general sense, whatever is taught. Hence, a principle or position in any science; whatever is laid down as true by an instructor or master. The doctrines of the gospel are the principles or truths taught by Christ and his apostles. The doctrines of Plato are the principles which he taught. Hence a doctrine may be true or false; it may be a mere tenet or opinion.

So what is the Biblical meaning of this word? How is it used in our Bibles?

A lot of English translations don’t use the word “doctrine” in the Old Testament. Of those that do, it is generally from the Hebrew word לקחי leqach (Strong’s Hebrew word #H3914), a noun meaning teaching or instruction. Some translators evidently felt the word “doctrine” conveyed more of a contextual meaning. Interestingly, in one translation – the New American Bible – the word Torah is translated as doctrine in Malachi 2:6.

The word is found more frequently in the New Testament and is a translation of διδασκαλία didaskalia (Strong’s Greek word #G1319), again meaning teaching or instruction. Yeshua is quoted as using the word once, himself quoting from Isaiah 29:13. What we have recorded in the Gospels in Greek appears to be quoting from the Septuagint, though it is highly unlikely Yeshua was speaking Greek. Speaking Aramaic, he was more likely quoting from a Hebrew text that is no longer extant (the Septuagint being the closest we have).

And He said to them, “Rightly did Isaiah prophesy of you hypocrites, as it is written:
‘This people honors Me with their lips,
But their heart is far away from Me.
But in vain they do worship Me,
Teaching as doctrines the precepts of men.’
Neglecting the commandment of God, you hold to the tradition of men.”
(Mark 7:6-8)

All other uses of didaskalia in the New Testament are by Paul.

Most traditional churches have some sort of “Statement of Faith,” a list of beliefs that describe a denomination, local independent congregation or sometimes local autonomous congregation within a denomination. Usually within the Statement of Faith are certain core elements considered as Essential Christian Doctrine – things that if you don’t believe it means you are not a Christian. Who decided what those things are? What defines a Christian?

As you might imagine, there is no universal agreement. Ask a Mormon, a member of the Church of Jesus Christ of Latter Day Saints, if they are a Christian. Then ask someone from a different church – for example, ask a Baptist – if the Mormon is a Christian. You will probably not get the same answer. Why?

The Worldwide Church of God was founded (as the Radio Church of God) in 1934 by Herbert W. Armstrong. Armstrong believed he and those of his organization were Christians, though most other Christians would disagree. Following his death in in 1986, his successor Joseph Tkach “transformed” (his words) the church into a denomination recognized by the National Association of Evangelicals as Christian. Today it is known as Grace Communion International. One of the primary defining qualifications was their acceptance of the doctrine of the Trinity in 1993 (Joseph Tkach, “Transformed by Truth” page 148). It is a part of the Statement of Faith for the National Association of Evangelicals, but who made belief in a triune Godhead a requirement to be a Christian?

I am not defending or advocating for Mormonism or Armstrong, nor would I align myself with either group. It isn’t my place to determine whether or not their adherents are Christians. Some of the people judging these groups would likely not call me a Christian, either. The New Testament does not define the term, which is used only three times: Acts 11:26, Acts 26:28, and 1 Peter 4:16. Thayer’s Greek Definitions just says it means “a follower of Christ.”

Yeshua the Messiah (Christ) didn’t require allegiance to a list of doctrines or formal Statement of Faith. But he did on multiple occasions say to follow him.

What Did Yeshua Say?

Though the majority of Yeshua’s teaching was more focused on how we are to live, there were times when he addressed doctrinal issues. Here is the one that he said was the most important:

He didn’t say to believe and acknowledge God as three-in-one, but he did say that who he is was revealed directly by the Father:

Simon Peter answered, “You are the Christ, the Son of the living God.” And Jesus said to him, “Blessed are you, Simon Barjona, because flesh and blood did not reveal this to you, but My Father who is in heaven.
(Matthew 16:16-17)

From that time Jesus began to preach and say, “Repent, for the kingdom of heaven is at hand.”
(Matthew 4:17)

And someone came to Him and said, “Teacher, what good thing shall I do that I may obtain eternal life?” And He said to him, “Why are you asking Me about what is good? There is only One who is good; but if you wish to enter into life, keep the commandments…and come, follow me.”
(Matthew 19:16-17;19)

Yeshua indicated here that he and the Torah are inseparable, just as Yahweh’s words recorded by Moses in the Torah speak of Yeshua.

“For if you believed Moses, you would believe Me, for he wrote about Me. But if you do not believe his writings, how will you believe My words?”
(John 5:46-47)

“The LORD your God will raise up for you a prophet like me from among you, from your countrymen, you shall listen to him. This is according to all that you asked of the LORD your God in Horeb on the day of the assembly, saying, ‘Let me not hear again the voice of the LORD my God, let me not see this great fire anymore, or I will die.’ The LORD said to me, ‘They have spoken well. ‘I will raise up a prophet from among their countrymen like you, and I will put My words in his mouth, and he shall speak to them all that I command him. ‘It shall come about that whoever will not listen to My words which he shall speak in My name, I Myself will require it of him.”
(Deuteronomy 18:15-19)

John, the writer of the Revelation of Yeshua the Messiah, records three times the unity between Yeshua and the Torah.

So the dragon was enraged with the woman, and went off to make war with the rest of her children, who keep the commandments of God and hold to the testimony of Jesus.
(Revelation 12:17)

Here is the perseverance of the saints who keep the commandments of God and their faith in Jesus.
(Revelation 14:12)

And they sang the song of Moses, the bond-servant of God, and the song of the Lamb, saying,
“Great and marvelous are Your works,
O Lord God, the Almighty;
Righteous and true are Your ways,
King of the nations!”
(Revelation 15:3)

Eternal life in the olam haba, the world to come, requires both faith and obedience. That isn’t a gospel of salvation by works; it is salvation evidenced by works. John, one of the twelve disciples of Yeshua during his earthly ministry, wrote about this following his account of Yeshua’s encounter with Nicodemus.

“He who believes in the Son has eternal life; but he who does not obey the Son will not see life, but the wrath of God abides on him.”
(John 3:36)

Salvation, eternal life, is through faith (belief, trust) in Yeshua. We can’t obtain it ourselves; it only comes to those to whom the Father shows his favor (grace). And Yeshua said no one comes to the Father except through him. We need to believe that, not try to figure out and explain how he does it. And in the meantime, do what he says. Keep the commandments and follow him. That is essential doctrine.