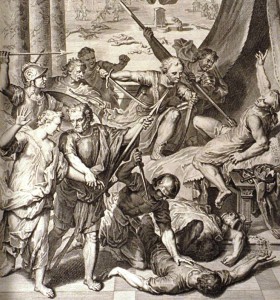 No, that is not the title of yet another book by Bill O’Reilly. It is one part of Torah portion Vayishlach, which brings Jacob (Israel) back to his homeland. Most of the things you read will probably focus on Jacob wrestling with an angel, whoever that may be. It is an interesting study.

I want to look at another storyline, one that may seem a little out-of-place, recorded in Genesis 34. Shechem, son of Hamor a Canaanite, took Dinah, the daughter of Jacob and forcibly had sexual relations with her. The culture of the day was quite different than ours today, thus many things are not obvious to us or don’t seem to make sense. Legend in the book of Jashar (chapter 33 – please do not consider this inspired Scripture) says that Dinah remained in the house of Shechem (confirmed in Genesis 34:26). It also says Jacob sent two maidservants to the house of Shechem to care for Dinah and stay with her. What follows appears to be a legitimate proposal of marriage between the two families.

Before considering the marriage agreement, the sons of Jacob insisted that the men of that land become circumcised, the sign of the covenant between God and Abraham. No doubt this was just a devious plan to weaken Shechem and his men, but trusting the family of Jacob the men of the land agreed – albeit for selfish reasons. The Genesis account tells us that while they were writhing in pain from the circumcision, two of Jacob’s sons, Simeon and Levi, raided the city and killed them all.

There are many accounts in Jashar of the sons of Jacob conducting surprise raids. They were quite a rowdy bunch. Yet this is the only one recorded in the Bible. It becomes a part of the final prophecy by Jacob before his death (Genesis 49) in which he condemns their action, curses their anger and declares that they will be scattered in Israel (Genesis 49:5-7). Eventually, the tribe of Simeon would be fully engulfed by Judah (look at a map of the inheritance of the twelve tribes) and the tribe of Levi would truly be dispersed throughout all the land of Israel.

It’s That Time Of Year Again

The Christmas season is fast approaching us in the world and it is often a difficult one for Torah-obedient believers, especially those new to this lifestyle and those who have family members who do not understand. I think there are some lessons we can learn from the example of Simeon and Levi on how we approach this. Now please keep in mind that there is no direct correlation between this story and what I am about to share. You cannot draw one-on-one comparisons, and nothing in one situation justifies or explains something in the other situation. This account simply triggered a few thoughts.

For people coming into this Hebraic walk of faith, it is very much a circumcision. After all, it is a covenant. There is overwhelming joy in discovering the ways of Yahweh and the true character of Yeshua (Jesus), the Living Torah. However, there is also some pain as our old ways, including many of our old celebrations and observances, are cut off. Those of us who have been in this movement for a while sometimes forget the initial struggle and the pain of this “circumcision.”

This is not the time, while new people are still experiencing the agony of the “circumcision,” to attack, wound and kill our brothers and sisters over the infusion of paganism into this season. Actually there is never a time for that, but in our zeal we sometimes are way too harsh on those just coming into this understanding. Yeshua was harsh on those who should have known better (remember the cleansings of the Temple) and yet showed immense compassion to those who were sincerely turning from their sin and beginning to follow him.

Circumcision – even circumcision of the heart – is painful, and it takes time to heal, to not feel that pain. We don’t “get” this all at once. James and the other apostles determined that those new to the faith needed only start with certain essential practices. The rest, including circumcision, as important as they are, would be learned and implemented as they are taught from Torah every Sabbath (Acts 15:19-21).

No, I will not compromise during this season. No jolly fat man in a red suit, no Christmas tree, no yule logs and I’m not going to church on Christmas Eve. Neither will I condemn those who may struggle or stumble as they face this for the first time. This calls for a spirit of gentleness (Galatians 6:1) as we encourage, edify and even correct each other. Above all, keep fervent in your love for one another, because love covers a multitude of sins (1 Peter 4:8). Wisdom through the Ruach Hakodesh (Holy Spirit) must be working in our lives when we approach this. Here is the instruction given by Jude, the half-brother of Yeshua:

But you, beloved, building yourselves up on your most holy faith, praying in the Holy Spirit, keep yourselves in the love of God, waiting anxiously for the mercy of our Lord Yeshua Messiah to eternal life. And have mercy on some, who are doubting; save others, snatching them out of the fire; and on some have mercy with fear, hating even the garment polluted by the flesh. Now to Him who is able to keep you from stumbling, and to make you stand in the presence of His glory blameless with great joy, to the only God our Savior, through Yeshua Messiah our Lord, be glory, majesty, dominion and authority, before all time and now and forever. Amen (Jude 20-25).