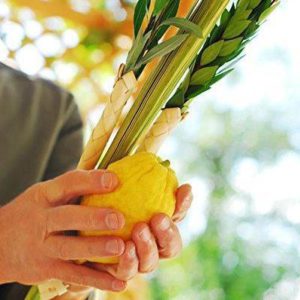 Sukkot, the Feast of Booths or Feast of Tabernacles, has often been called The Season of Our Joy. This is the only one of the Appointed Times where we are commanded to have a good time.

Now on the first day you shall take for yourselves the foliage of beautiful trees, palm branches and boughs of leafy trees and willows of the brook, and you shall rejoice before the LORD your God for seven days (Leviticus 23:40).

Our adversary knows this, of course, and I think he does his best to prevent us from experiencing this joy. I’ve noticed that as this season approaches, discord and dissention is more likely to arise among us.  When we allow strife and offense to consume us, there is no time left for the joy our Father so much desires for us to have.

Part of the instruction for rejoicing, as the above passage describes, is waving natural foliage before Adonai. The Rabbis have identified arbat haminim (four species) for this purpose, and there is rich tradition surrounding what these represent.  Several times in past years I have purchased these four species for the Sukkot celebration: the lulav or closed fond of the date palm, hadass or myrtle branch, aravah or willow branch, and etrog or citron fruit.  Collectively they are often just called lulav.

This year I ordered my lulav early to make sure I would have it before Sukkot. It arrived two days before Yom Kippur.  But when I went to pick it up at the Post Office, I was informed that there was postage due.  Though the price I paid included shipping, the vendor had applied First Class postage to a Priority Mail package.  I gave the clerk the required amount, and was surprised to be handed a relatively small, triangular shaped Priority Mail package.

I opened it to find the palm frond, which was longer than the package, tied to the inside of the box. The citron was rolling around lose, with its “official” Hebrew-inscribed box flattened inside the triangular packaging.  The tying pieces and the woven holder for the palm, myrtle and willow were missing.  As I examined each piece and was fretting over the situation, the fragrance of the lulav began to fill the room.  Pieces were missing, but the joy was still there.  I have a woven holder left from previous years, and we can deal with my complaints after the Feast has passed.  Sorry hasatan, you lose.

The day after Yom Kippur my wife and I attended a fund-raising banquet for a local homeless shelter. We had been actively involved with this shelter in the past, but did not have any recent interaction.  About a week ago, I ran into the director and he extended the invitation.  The program was excellent and moving, and this seemed an appropriate application of the Haftarah portion we had just read in Isaiah 58 the day before.

The meal, on the other hand, was a different story. Before going, I called and was told there was a choice of entrée – we could have roast pork or a chicken dish.  Chicken seemed doable, but after we were seated and I recognized the caterer, I knew (from past experience) there was a problem.  Sure enough, the chicken was smothered in a bacon and mushroom sauce.  I walked to the kitchen and asked the caterer if there was another alternative, but was informed there was not.  Even the green beans were laced with bacon.

After a brief conversation, I convinced the caterer to bring out plates with plain mashed potatoes and salad for my wife and I. He did that almost immediately, though the other guests at our table were not served their full plates until about half of the remaining 300 people in the room were served.  By that time, our potatoes were cold.  The server then refilled my iced tea glass, which no longer had ice, with warm brewed tea.  But we smiled and ate our cold potatoes, salad and roll.  Now I was ready for that piece of chocolate cake.

At my request, my server brought me a cup of coffee to go along with my chocolate cake. I enjoyed a big bite of the sweet cake, then took a sip of the freshly brewed coffee.  But it wasn’t coffee.  It was tea.  Now, I like tea, but not when I am expecting coffee.  This dining experience couldn’t get much worse.

Then a memory from the past filled my head. Many years ago, when my now-wife and I first began dating, she invited me over to her house for dinner.  She lived with her parents, and her mother prepared a wonderful, filling meal.  At the conclusion of the meal, she offered me coffee.  No one present – not her, her mother, her father or her brother – drank coffee, but she knew I did and she very sweetly went into the kitchen to prepare it.

A few minutes later my new girlfriend presented me with a nice cup of hot coffee. I said thank you and took a sip.  It was not coffee; it was tea.  She had confused the ground coffee with loose tea leaves.  I didn’t know what to do, so I continued to drink it.  But after a little while I had to say, “This isn’t coffee.”  She might have been a little embarrassed, but we all laughed about it.

And now, as I related this story to my table host at the end of this less-than-perfect banquet, we laughed about it again. So many years before, my Heavenly Father had created a situation that prepared me for this time when the adversary would attempt to take my joy.  Sorry hasatan, you lose again.  I called my server over and told her what had happened, not to complain, but so that she wouldn’t take the same thing to someone else.  She returned with a delicious cup of coffee.

The Joy of the LORD

In the book of Nehemiah we read of the return of some of the Jewish exiles from Babylon to Jerusalem. It was at this same time of year, this Feast season, when those well-known words are spoken, “The joy of the LORD is your strength” (Nehemiah 8:10).  But that isn’t all of it; that isn’t even the entire sentence, it’s just the part we all like to quote.  Nehemiah said, “Do not be grieved, for the joy of the LORD is your strength.”  Even back then, the enemy sought to discourage God’s people at His Appointed Times.

Here is the whole verse:

Then he said to them, “Go, eat of the fat, drink of the sweet, and send portions to him who has nothing prepared; for this day is holy to our Lord. Do not be grieved, for the joy of the LORD is your strength.”
(Nehemiah 8:10)

And so will I. How about you?