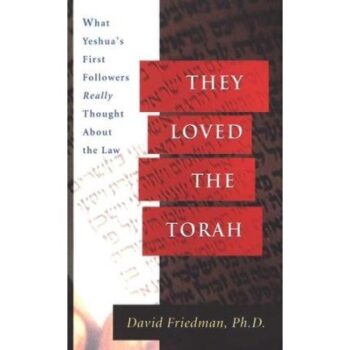 I first read this book back in 2002. Being pretty new to a Torah-based lifestyle, I browsed the catalog from Messianic Jewish Publishers and the title of this book caught my attention. Here was a book that recognized and highlighted how Yeshua and his early followers lived according to the instructions God had originally given to his people. Recently while looking for something else, I saw it on my book shelf and decided to read it again after more than fifteen years that have passed.

The issue to be addressed is listed on the front cover: What Yeshua’s first followers really thought about the law. The word “really” is shown in italics, hinting that what we generally think they thought might not actually be the case. The presentation is systematic and easy to follow.

Title: They Loved The Torah

The author, Dr. David Friedman, dives right into the big ones, starting off by looking at how Yeshua himself viewed and observed the Sabbath and dietary laws. Friedmen examines scriptural evidence that is often missed because the reader lacks historical context. For example, he discusses Sabbath observance in light of the halakhic conflict between the schools of Rabbi Hillel and Rabbi Shammai, both being within the Pharisaic tradition but holding significantly different views. It is these struggles inside the Jewish community that were problematic. Keeping Sabbath and eating kosher were non-issues, as everyone followed these practices. The disagreement was in how.

If you have ever struggled with Paul’s writings – and I readily admit that I have – this book will help. Dr. Friedman shows Paul’s Torah observance as evidenced by how he lived. He demonstrates the consistency of Paul’s lifestyle from the time Ananias first prayed for him through his imprisonment, using that context to then consider Paul’s writings.

The book is organized in four parts:

The last chapter of the fourth section is titled “The Torah on How to Observe The Torah,” taking the premise from the well-known v’ahavta.

The author reaches this conclusion:

The prophet Micah spoke of the proper and loving way in which the Torah was meant to be kept:

He has told you, O man, what is good;
And what does the LORD require of you
But to do justice, to love kindness,
And to walk humbly with your God? (Micah 6:8)

The New Testament portrays the Messianic community as keeping the Torah according to the words of Micah. Justice, covenant love and humility were to be the trademarks of a man who kept it. The first-century community kept the Torah in the way prescribed by God himself – with the right heart attitude. May our observance of it honor God in the same way!

As an epilogue, Dr. Friedman shows from the book of Revelation and from the prophet Zachariah that the future Messianic community will be identified by the same characteristics.

This book is written by a Messianic Jew to Messianic Jews. Although it does not address observance of Torah by those outside the Jewish community, all followers of Yeshua/Jesus will benefit from Dr. Friedman’s insight. Understanding the context and resolution of the writers and characters of the New Testament is beneficial to both Jew and non-Jew alike.

Dr. David Friedman is the former Academic Dean and Professor of Jewish Studies at King of Kings College in Jerusalem, Israel. He has served as rabbi of several congregations and was a member of the Israel Defense Force.

They Loved The Torah:
What Yeshua’s First Followers Really Thought About the Law

Other books by Dr. Friedman:

At the Feet of Rabbi Gamaliel:
Rabbinic Influence in Paul’s Teachings (2013)

James the Just
Presents Applications of the Torah (2012)