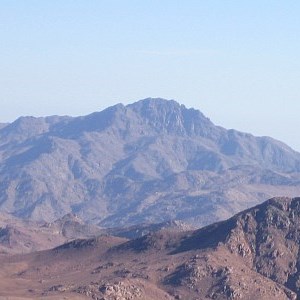 The fifth book of Torah, Devarim, gets its name in the same way as the rest of them. The book begins eleh hadevarim “These are the words…” In the Hebrew Bible, the five books of the Torah are named simply by the first significant word in the text – in this case, Devarim or “words.” In the Christian Old Testament, this book is called Deuteronomy based on the Greek name in the Septuagint. Deuteronomy is a compound word, made up of the Greek words deuteros and nomos meaning “second law.” In this book, Moses recounts the journey and instructions (Torah) for the second generation of Israelites preparing to enter the Promised Land.

Moses doesn’t begin the story with the exodus out of Egypt. He doesn’t even start with the giving of the Ten Commandments, though he will reflect on that later. Instead, he begins with the encampment of Israel around the base of the mountain where God gives these instructions:

Adonai our God spoke to us at Horeb saying: “You have stayed long enough at this mountain. Turn, journey on…”(Deuteronomy 1:6-7 TLV).

There are seven Hebrew words that make up the last part of verse 6 and beginning of verse 7 quoted above, with this translation adapted from The Schottenstein Edition Interlinear Chumash:

For the Israelites, the recent past had been pretty good. Following the tragic incident of the golden calf, the focus was on the construction and service of the Tabernacle. This massive undertaking was accomplished in only a few months. Using the plunder taken from the Egyptians, they had more than enough to create this magnificent portable structure designed by God himself.

The Stone Edition Chumash has this note, attributed to Rashi:

In the plain sense, God was saying that the year at Sinai was enough, and it was now time to enter the land. Midrashically, רב [rav] is rendered as abundance: your stay at Sinai has brought you an abundance of reward and accomplishment: the Torah, the Tabernacle and its accouterments, elders, and leaders.

God did not tell one or two people that they had been there long enough. He didn’t single out any individual and suggest that they had either learned all they could learn or given all they could give to this group, and now it was time to leave that congregation and go find (or start) another one.

שׁבת shevet is more commonly translated as “to dwell.” Most of us are familiar with Psalm 133:1 and sing it frequently. Hine ma tov umanaim shevet achim gam yachad, “Behold, how good and how pleasant it is for brothers to dwell together in unity.” Some translations even use the word “dwell” in Deuteronomy 1:6. I imagine that after this long of a time in one place, the Children of Israel were getting a lttle comfortable with the routine. Maybe they weren’t even thinking of actually moving on.

This wasn’t the final destination, but it seems like the longer they (we?) are settled in one place the more difficult it can be to move. The great Christian and Missionary Alliance preacher A. W. Tozer termed it rote, rut, and rot. We get in a routine, then that routine becomes a rut we can’t get out of, so we sit in it and rot.

Whatever the situation might have been, God knew it was time to journey on. Soon the pillar of cloud/pillar of fire picked up and set out, the signal that it was time to go (Exodus 40:36-38).

Preparation and learning take place בהר b’har on the mountain. The whole Israelite community saw the smoke and fire on the mountain, heard the voice of God, and received through Moses the instructions of Torah. Generations later, a multitude of people would gather on the side of a mountain and listen to the voice of God, Yeshua, in one of the most well-known sermons of all time. And what was his topic? The instructions of Torah!

Sometime later, Yeshua took his most inner circle from his inner circle and went up on another mountain. There they witnessed Yeshua standing with Moses and Elijah – the Law and the Prophets. The voice of Almighty God announce from the heavens, perhaps in the same way he did on Mount Sinai, “THIS is my beloved son, with whom I am well-pleased. Listen to him!”

THIS is very specific – the Father was specifically pointing out that this Yeshua, this one, had the authority of sonship and was the focus of the Law and the Prophets.

And for the Children of Israel here at Horeb (Sinai), the mountain הזה hazzeh – this one, is where they would hear the voice of God. It was a very specific place, promised years before.

This one was an important stopping place promised by God – “when you have brought the people out of Egypt, you shall worship God at this mountain” (Exodus 3:12).

So now, having “stayed long enough at this mountain,” they were instructed to פנו panu turn. This is the imperative, or command, form of the verb panah meaning to turn toward or turn away from something. It differs somewhat from the word shub, which generally means to return, though their meanings do seem to overlap. The nouns paneh (face) and paniym (faces) are derived from the verb panah.

God’s command was to turn from the place where they had settled in and face in the direction of what he had promised. Then they were to וסעו u’ssuw journey on to a better destination. It wasn’t an easy trip, and that time around the Mountain of God was great. Yet what lay ahead was greater still.

The Hebrew imperative verbs are again followed by the second person plural לכם lekhem “for yourself.” It doesn’t mean that each person was to turn and journey on their own to the Promised Land. Rather, it indicates this united group of individuals would move forward as a nation, following their God in the cloud and fire.

Are we listening? Are we following when God says it is time to move?

When Jesus had finished these words, the crowds were amazed at His teaching; for He was teaching them as one having authority, and not as their scribes. When Jesus came down from the mountain, large crowds followed Him (Matthew 7:28-8:1).

Now this is the commandment, the statutes and the judgments which the LORD your God has commanded me to teach you, that you might do them in the land where you are going over to possess it, so that you and your son and your grandson might fear the LORD your God, to keep all His statutes and His commandments which I command you, all the days of your life, and that your days may be prolonged. O Israel, you should listen and be careful to do it, that it may be well with you and that you may multiply greatly, just as the LORD, the God of your fathers, has promised you, in a land flowing with milk and honey (Deuteronomy 6:1-3).