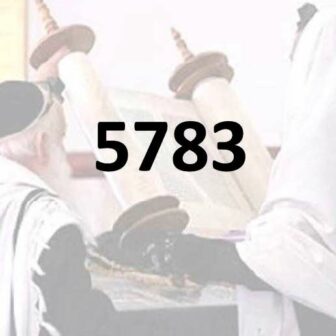 The Messianic Torah Portion calendar for 5783 is now available for download. Unlike calendars that add Hebrew dates to the traditional Gregorian months, this calendar is organized around the Hebrew months with the Gregorian dates noted for reference. One primary purpose for this design is to encourage Messianic and Hebrew Roots believers to think in terms of the Creator’s calendar.

The Hebrew calendar is “lunisolar,” based on cycles of both the moon and the sun. It takes about 29-1/2 days for the moon to cycle around the earth (one lunar month), making a month either 29 or 30 days. It takes about 365-1/4 days for the earth to cycle around the sun (one solar year). But since 365 days isn’t evenly divisible by any combination of 29 or 30 days, after a short while the fall months would actually fall in the spring. (You can see this in the Islamic calendar, where Ramadan moves backwards by 10 or 11 days each year).

Fixed Dates for the Biblical Festivals

A second purpose of this calendar is to list the weekly Torah portions and their associated Haftarah and Brit Chadasha (New Testament) readings. This cycle of readings is common tradition throughout the Jewish community as well as most Messianic and Hebrew Roots groups. And for the same reasons previously mentioned, the Torah cycle is very consistent each year when considered with the Hebrew months – the cycle begins right after Sukkot (Feast of Tabernacles), and concludes on the last day of the next Sukkot. The portions fall at the same time during year, varying only to accommodate either a twelve- or thirteen-month cycle or when Feasts fall on the Sabbath.

This calendar uses the Hillel calendar as a basis. I recognize there are disagreements about the timing of the beginning of the months, but even if you believe this calendar is a day or two off here and there, these two stated purposes still apply. Try to think in terms of the Biblical cycle of months and the Appointed Times, and the Torah readings for the Sabbaths will still line up even if you think the dates are a little different.

In a word – unity. I’ve seen and read about a lot of different “Biblical” calendars, and all of them are the correct one – at least in the mind of those promoting them. It would be nice if there was a chapter somewhere in Scripture that says exactly when to start a day, a month, or a year. But that chapter does not exist, and if it did, well, we probably still wouldn’t agree about what it said. So, as in ancient Israel, everyone does what is right in their own eyes (Judges 17:6; 21:5).

I’ve encountered people who defend the dark moon, the sighted sliver, the sliver in another location, even the full moon. I was once right there with them. I know people with various methods of determining when it is time to start a new year, disagreeing even to the point of being a whole month separated from everyone else in celebrating the Appointed Times. At best, it makes us look silly. And in the end, it doesn’t accomplish a thing.

I did depart from Hillel in three things, even though there is a reason the Hillel calendar does these tree things. First, Passover, or more correctly the Feast of Unleavened Bread, is seven and not eight days. Second, Shavuot and Rosh Hashana (known by many names) are two days (in the diaspora) on the Hillel calendar. I have shown them only as one day. I believe these to be in agreement with the Appointed Times as presented in Scripture.

Third, the counting of the Omer from the waving of the first sheaf to the day of Shavuot begins on the first day of the week (Sunday). An alternate count is shown beginning on 16 Aviv (Friday). Most Messianic Jewish congregations start on 16 Aviv. Most all other Messianic and Hebrew Roots communities begin and end on the first day of the week. For more on this controversy, read my post Shavuot – The Undated Holiday.

This calendar also includes a few traditional fasts and observances, some of which are found in Scripture, including Chanukah (1 & 2 Maccabbees and John), Purim (Esther) and Simchat Torah. They aren’t in the instructions of Torah. If you choose not to celebrate these, just ignore them on the calendar. Nothing else is affected.

The names of the weekly Torah portions are shown on each Sabbath. They follow the traditional annual cycle for outside the Land of Israel (the Diaspora), again for the sake of unity. Beginning with Shavuot, the readings in the land of Israel occur one week earlier than in the Diaspora. They will stay one week ahead until we get to Pinchas on 19 Tamuz/July 8, and then we will be back in sync.  Some groups use a 3-year “triennial” cycle but I have not attempted to incorporate it.

You can download my calendar for the Hebrew year 5783 here. From your computer, right-click on the link and save the PDF file. You can print the full sized pages, or choose the “booklet” format from the print dialog in your PDF reader to create a smaller sized calendar. I’ve designed it to print very nicely in the booklet format.

2 thoughts on “Torah Portion Calendar for 5783”