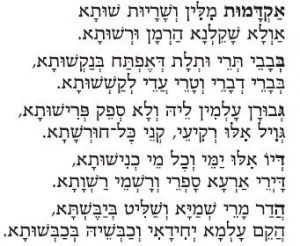 This is an English translation of the Aramaic poem Akdamut Milin (Introductory Words). It is traditionally read on Shavuot prior to the reading of the Ten Commandments. This song is an acrostic poem, as can be seen in the image (click to enlarge).  It was written in the late 11th century by Rabbi Meir Ben Yitzchak Nehorai in Worms, Germany.  I found no copyright information on this English translation and do not know how literal it is.

Before reading the ten divine commands,
O let me speak in awe two words, or three,
Of the One who wrought the world
And sustained it since time’s beginning.

At God’s command is infinite power,
Which words cannot define.
Were all the skies parchment,
And all the reeds pens, and all the oceans ink,
And all who dwell on earth scribes,
God’s grandeur could not be told.

Sovereign over the heavens above,
God reigns supreme on earth below.
God launched creation unaided
And contains it in the bounds of His law.

Without weariness God created,
Only by divine will, uttered in a gentle sound.
God wrought His works in six days,
The established His glorious sovereignty
Over the life of the universe.

Myriads of angelic hosts serve God,
Divine messengers that propel life’s destiny.
They arise each morning to their calling.
All the celestial beings join in a chorus of praise;
In unison they call to one another:
All the earth is full of the glory of the thrice Holy One.

In a mighty roar,
As the thundering noise of vast waters,
Moving amidst the heavenly spheres
Where the divine light grows brilliant,
The angelic hosts proclaim their words of adoration:

Praised be God’s glory by every whispering lip
From the place of His abode which is everywhere.
All the celestial hosts roar their response in awe:
The splendor of God’s dominion
Is acclaimed from age to age.

Yet dearer to God than this
Is the song of the children of Israel,
Rising to Him morning and evening,
In free outpourings of adoration.

Chosen to be the faithful servants of God’s will,
They continually rehearse God’s praises,
Who summoned them in love
To pursue the labors of Torah,
And accepts their supplications and entreaties,
Which weave a crown of glory for the Almighty.

The Eternal cherishes their prayers
And keeps them ever before Him,
Thus declaring the greatness of Israel
Who reiterate that God is One.

Israel acclaims the glory of the Ruler of the universe,
And offers God homage before kings and princes.
They all gather and ask in wonder,
Who is this your beloved, O fair one,
For whom you brave the perils of the lion’s den?
If you but join our fold,
We would cover you with splendor and glory;
In every land would we ratify your every wish.

A wise reply is Israel’s:
How can you know God with your foolish minds?
How compare the glories you bestow
With the glory that is God’s,
With the splendor of God’s deeds
In the hour of our deliverance,
When the light divine will shine on us
While darkness covers your mocking multitudes,
When God will manifest His glorious might
And render His foes their due,
And triumph to the people
Abounding in virtue
Whom God has loved.

Joy unmarred will reign in hearts ennobled, pure.
Jerusalem will rise again;
Her exiled children will come back to her.
Day and night God will shed His glory on her,
And build in her anew His sacred shrine of praise.

The righteous will possess the reward for their service.
They will dwell before their Creator,
Arrayed on golden thrones,
With seven steps ascending,
Resplendent as the azure of the sky
And the brightness of the stars.

They will acclaim God:
It is God we trusted with faith unyielding
In the days of our captivity.
God will lead us forever,
Renewing us with the glee of youthful dancers.

We still possess the portion
God set apart for us in ancient days.
Leviathan and the wild ox of the mountains
Will charge and contend with each other,
The beast goring fiercely with its horns,
The sea monster striking with its mighty fins.

But Adonai will make an end of them
With His great sword,
And prepare a banquet for the righteous.

They will sit at tables of precious stones,
Rivers of balsam flowing before them:
And they will drink the precious wine
Stored for them from the first of days.

O you upright who have heard the song of God’s praise,
May you ever be in the blessed circle of God’s faithful.

Through all eternity, exalted be Adonai
Who conferred true love upon us
By entrusting to us the Torah.