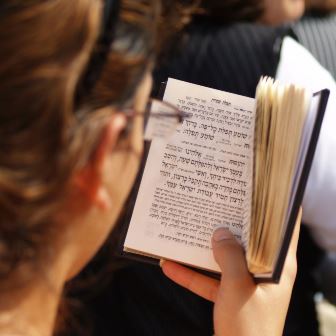 Tefillat Amidah, or the Standing Prayer, is perhaps the most commonly referenced liturgical prayer in the Jewish or Hebrew faith. Originally known as Shemoneh Eshrei, Hebrew for “eighteen,” it consisted of eighteen blessings or “benedictions” arranged in a specific pattern.

Traditionally, observant Jews pray the Amidah three times a day – morning, afternoon, and evening – patterned after the times of prayer recorded for the Patriarchs: Abraham in the morning (Genesis 19:27), Isaac in the afternoon (Genesis 24:63), and Jacob in the evening (Genesis 46:2). Scripture suggests that Daniel was following this pattern during the time of the Babylonian captivity (Daniel 6:10), praying three times each day while facing toward Jerusalem according to the dedication prayer of King Solomon.

Listen to the supplication of Your servant and of Your people Israel, when they pray toward this place; hear in heaven Your dwelling place; hear and forgive.
(1 Kings 8:30)

Let me pause here and say, if you have an opposition to praying set, defined, printed prayers, well… I understand. I was raised in an evangelical, non-liturgical religious environment. Rote prayers, “vain repetition,” was a no-no – although I do remember at times reciting The Lord’s Prayer at church. At a very early age my brother and sister and I ceased from saying “God is great, God is good…” and “Now I lay me down to sleep…” and started saying “real” prayers.

We rotated praying at family meals, and the three of us plus Mom and Dad prayed in turn at night following family Bible reading. Now I can tell you, that is a rich and valuable heritage for which I am thankful. But try as I did, I just couldn’t make each prayer sound different. After a while, I gave up. My siblings and I would sometimes mock each other, mouthing word-for-word what the other was praying, because every time it always came out the same. It made me never want to pray in public, something that stuck with me for a long, long time. I could pray alone, but not when someone else was listening to what I was saying.

It took a while, but now I am quite at ease praying the same words over and over – focusing on the words themselves, not trying to come up with a new and fresh way to say it, and unconcerned about how someone else hearing me may judge them. Consider this: when my wife and I separate from each other to go to work or run errands, we nearly always tell each other “I love you.” And though the words always come out the same, they never lose their sincerity. It doesn’t matter if anyone else is listening.

I’ve also found reciting someone else’s words and offering them to my Heavenly Father to be very helpful and focused. It is so beautiful to pray the same words as King David, Moses, Yeshua and others from the Holy Scriptures. And the traditional blessings and prayers offered by our forefathers are often so well thought-out and deeply meaningful for this modern age. Yes, they can become mechanical, for instance if I am vocalizing them but thinking about the things I need to pick up at the store prior to mowing the yard before it rains. Instead, I will meditate on each phrase being said, and then the next time will do the same thing again. And praying these structured prayers always allow the freedom to include personal praise and petition in them.

The early Amidah itself was much less formal than it is today, likely just an outline or guide by which the one praying would offer his own words. During the time of Yeshua and Second Temple Judaism, the Amidah may have become more codified. It has been suggested that Zachariah, the priest and soon to be father of John the Baptist, was praying the Amidah as he performed the Temple service described in Luke 1. The people outside the Temple were also praying the same prayer, and when they had finished but Zachariah didn’t come back out, they knew something was up. Some see patterns of the Amidah in Yeshua’s model prayer (The Lord’s Prayer in Matthew 6) and in the opening words of Paul’s letter of Second Corinthians.

As Rabbinic Judaism emerged following the destruction of the Temple and the Bar Kokhba revolt, an additional “blessing” was added to the now formalized Amidah. The additional words, though, weren’t actually a blessing; they were a curse pronounced against heretics. According to The Complete Artscroll Siddur, these were “such heretical Jewish sects as the Sadducees, Boethusians, Essenes, and the early Christians,” though none of these are named directly. Followers of Yeshua generally do not recite this portion. Though the words may express truth, we know the purpose for which they are intended.

The daily Amidah consists of eighteen (or nineteen) blessings in three broader divisions:

There are a few variations to the Amidah. For example, on Shabbat, the middle section of petitions is not said, and is instead replaced with a blessing called Kedushat HaYom, Holiness of the Day. It is a common tradition to then pause for silent petition before proceeding to the final section of thanksgiving. A similar modification is made for Festivals. The Amidah is even sometimes abbreviated for busy people who do not have time for the whole thing, replacing the middle section of petitions with one called Havineinu that summarizes all thirteen blessings (including heretics) into one.

Daily Prayers for Followers of Yeshua

You can find the Amidah along with other prayers and blessings in most every Siddur, or Hebrew prayer book. For believers in Yeshua, I  recommend the Messianic Siddur for Shabbat by Daniel Perek. Though it says it is “for Shabbat,” there is also a section of Daily Prayers as well as a few specifically for Festivals. For a more traditional Siddur you may wish to consider the Complete Artscroll Siddur, however this will not include blessings or prayers from the New Testament or any reference to Messiah Yeshua.

I have prepared a copy of the Amidah along with other select prayers with a specific purpose in mind, as I often do. It is written for use by the men I meet with who are incarcerated. We use traditional liturgy during our chapel services, and the guys had asked me some time back for prayers they could use through the week. What I came up with for them is eight pages, with two pages of preparatory meditations including the Shema, then five pages for the Amidah, and a final concluding page.

Similar to the Simple Messianic Sabbath Liturgy, these Daily Prayers for Followers of Yeshua have limited Hebrew vocabulary centered around common important phrases. Hebrew, transliterated Hebrew and English are shown, followed by the remainder of the prayer in English. In the Eighteen Benedictions, each one ending with “Blessed are You, O Lord our God…,” I’ve included the Hebrew and transliterated Hebrew along with English for the ending lines. The first few words of Yeshua’s Model Prayer (The Lord’s Prayer) and Raui HaSeh (Worthy is the Lamb) are taken from the Hebrew New Testament.

When followers of Yeshua are praying the Amidah, they are standing in unity with Jewish people all over the world. Remember, our Messiah was Jewish and most likely prayed the Amidah along with other congregants while attending the Synagogue, which “was his custom” (Luke 4:16). As we pray the words “His people Israel,” we know that Yeshua was sent to the lost sheep of Israel (Matthew 15:24) and to other sheep “not of this fold” (John 10:16). All who will properly join themselves to Israel are counted among them (Isaiah 56:6-7) and God’s house is a “house of prayer for all peoples” (cf Mark 11:17).

We can see Messiah Yeshua throughout the Amidah. He is the Redeemer promised to the descendants of the patriarchs. He is the offspring of David who will reign for eternity in the New Jerusalem, being built up as his bride. He is the Mighty God, the Healer and the Prince of Peace. Yeshua is the living expression of the Torah, the One like Moses whom God would raise up.

You can download the Daily Prayers for Followers of Yeshua that I have prepared for my friends here.  In this document, Messianic references to Yeshua found in the original sources, as well as the doxology for Yeshua’s model prayer, are shown [in square brackets]. Also, three places are designated with asterisks (*) where you may pause to pray silently or aloud for specific things. I hope as you pray these prayers they become a blessed way for you to honor the Father and stand with His people.

4 thoughts on “Praying the Amidah”