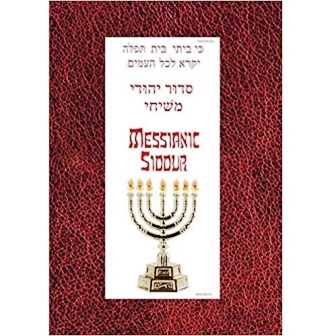 I very much appreciate liturgical worship and have started to accumulate a collection of various siddurim (plural of siddur). Some of them are Messianic, meaning content is for followers of Yeshua the Messiah (Jesus), and some are more of a traditional Jewish nature. Some are nice bound books, and others are paper copies, and some are e-books. A siddur is a book of Hebrew prayers and blessings in a set order, which is the meaning of the root word in Hebrew. A siddur is used in both private and public worship.

I wrote about a couple of my favorites here, but both of these are becoming increasingly difficult to find. Recently I discovered the Prayer Book and Life Cycle Guide was only available from a used bookseller at Amazon, and the price was outrageous – more than ten times what I had paid for a new one just a few years ago!

I came across this Messianic Siddur for Shabbat, and initially passed it by (more on that later). But when I finally did purchase it, I was presently surprised. I would definitely recommend this one – I just hope it continues to be available at a reasonable price. 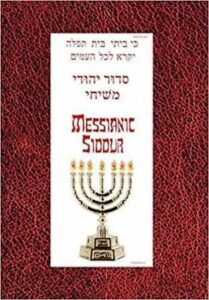 This siddur was “compiled for Congregation Bat-Tzion, a Messianic Congregation in Spring/The Woodlands,TX” (from the title page). It is a substantial book, with more than 430 pages covering the Shabbat service, prayers and blessings, along with the complete Sefer Tehillim, the book of Psalms, in Hebrews and English. It includes traditional blessings and prayers of ancient Judaism alongside blessings and prayers from the Brit Chadasha (New Testament). This is probably the most complete Messianic siddur I have seen.

My initial perception of this siddur created some hesitation, and probably not for a very good reason. They say you shouldn’t judge a book by its cover, though most of us do. I did, and I have never been a fan of that font that makes the letters of the English/Latin alphabet look like faux-Hebrew. So when I saw this used for the words “Messianic Siddur” on the cover, I assumed it to be one of the many Hebrew wanna-be items out there. I was wrong.

After the table of contents and introductory pages, I found traditional Hebrew prayers and blessings without any modification as some Messianic books are prone to do. In fact, when I put this siddur next to my Artscroll Siddur I discovered that the Hebrew text was for the most part identical, and the English translation also very similar. The Artscroll Siddur is over a thousand pages, so clearly not every traditional prayer is included in the Messianic Siddur, and New Testament-based prayers are found in the Messianic Siddur that of course aren’t in the traditional one.

For example, noticeably missing is Modeh Ani, the traditional prayer upon rising (which is included in the Prayer Book and Life Cycle Guide I previously mentioned). That’s OK, it isn’t Scriptural, it’s just something I like. And while the Messianic Siddur has Scripture and a traditional blessing for putting on the tallit and tzitziot, it does not have anything for wrapping teffilin – a Jewish tradition but not something commanded in Scripture. Though the tradition might be good, someone using this Siddur who does not practice it (like me) isn’t going to feel as though they are missing out.

The Messianic Siddur for Shabbat is very easy to use even if you aren’t fluent in Hebrew. I’m not even close, but love discovering things in this language. The Messianic Siddur shows each of the blessings, prayers and Scripture passages in a two-column format on the page. The Hebrew is in the left column, and of course reads right-to-left. The transliteration of the Hebrew text is in the right column, and of course reads left to right. So, you are reading both of them from the center column out to the edge of the page. I wish that each line of transliteration was exactly what is on the corresponding line in Hebrew, but it isn’t. That might not even be practical, as transliteration generally takes much more space than Hebrew. But it is very easy to follow. 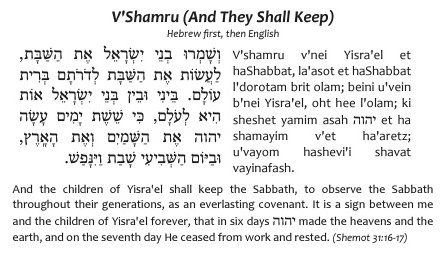 Following the two-column format for Hebrew and transliterated Hebrew, there is a single-column format for the English translation. This is good, since for the English translation to make sense it may not even be in the same word order as the Hebrew text. That is often a big problem with interlinear text where Hebrew, transliteration, and English are usually stacked on top of each other, so you have to stick with the Hebrew word order and put little superscript numbers on the English words in order to know in what sequence to read them so it makes sense. I really like this two-column followed by one-column format.

There are a few instances when the two-column followed by one-column format is not used. For example, the prayers of Teshuvah from Daniel 9 and Psalm 27 are shown in two-column format with Hebrew on the left and English on the right. I’m not sure why, but there is no transliteration. In the section for Sukkot, there is a New Testament passage from Luke printed with Hebrew in the left column and English in the right, without transliteration.

The Divine Name, the tetragrammaton יהוה yod-hey-vav-hey, is shown in Hebrew characters in all three places – the Hebrew text, the transliteration, and the English text. The purpose of doing this is so that the user can either pronounce or not pronounce the Divine Name as they see fit. The regular Hebrew text does have vowel points to assist in reading, however when the Divine Name is printed it is done without vowel points. It is well known that the vowel pointing added to the Divine Name in the Masoretic Text was done to discourage and hide the actual pronunciation.

The Messianic Siddur for Shabbat is fully Jewish and fully Messianic. For example, the opening section “Preparing for Worship” begins with Barkhi Nafshi, Psalm 104:1-2, then the traditional blessing for putting on the tallit/tzitziot with related Scripture from Numbers 15 and Deuteronomy 22. This is followed by Psalm 100. Then there is a reading marked “Justification – The Blood of Messiah” consisting of Psalm 111:10 (traditionally read at this time), Psalm 78:38, and 1 John 1:6-9.

Among the Songs of Praise are Adon Olam (traditional), the Song of Moses (Exodus 15), Song of Hannah (1 Samuel 2), and Tehromem Nafshi “My soul magnifies,” the song of Mary (Luke 1) often called the Magnificat. This section concludes with Naeh LaSeh, “Worthy is the Lamb,” a collection of various passages from the book of Revelation.

A blessing simply called “Messiah” is an expansion of the Blessing of the Messiah used in many Messianic congregations. This is appropriately followed by the Torah Procession “Honoring the Torah as the likeness of Messiah.”

The Messianic Siddur contains the complete Amidah prayer, again following this two-column then one-column format. I say “complete” because it has all 18 stanzas. It does not include the additional 19th Birkat haMinim, “Blessing the Heretics” (usually inserted between #11 and #12), a curse on Sadducees, Essenes and later Christians probably added in the first century CE. The English translation matches the Hebrew text, unlike the Prayer Book and Life Cycle Guide which occasionally inserts Messianic language in English but not Hebrew. For example, in the Prayer Book and Life Cycle Guide the first stanza Avot has this English rendering:

…who remembers the loyal deeds of our ancestors
And in love has brought Yeshua the Redeemer
To their children’s children for His name’s sake.

A literal rendering of the Hebrew (used in the Messianic Siddur) is:

…and remembers the kindness of our fathers
And brings a redeemer to their children’s children
For His name’s sake with love.

The name Yeshua or even the Hebrew word yeshua (salvation) does not appear in the Avot. Yes, the redeemer is Messiah Yeshua, but printing this in the English portion implies that you just said it in Hebrew, which is not the case. I like that the Messianic Siddur prints in English what was recited in Hebrew.

One deviation I have found is at the end of L’cha Dodi – Come, My Beloved (The Sabbath Bride). The Messianic Siddur adds the following Messianic verse not found in the traditional Artscroll Siddur in Hebrew, transliterated Hebrew, and English. There may be other places like this that I have not yet discovered.

The Messianic Siddur is divided into sections covering a Sabbath Worship Service and Havdalah, Daily Prayers and Moedim (Appointed Times). As previously mentioned, it contains the entire book of Psalms in Hebrew and English. The Artscroll Siddur also has the entire book of Psalms but in Hebrew only. There is a chart for the weekly Torah, Haftarah and New Testament readings and also for the Moedim. With the Sabbath Worship Service is a table of Psalms associated with each Torah portion.

These aren’t serious, and maybe I shouldn’t call them dislikes. I have already mentioned the font used on the front cover. So see, my dislikes aren’t really that big of a deal.

Within the introductory section there are a few pages entitled “A Note About The Name.” I pointed out that throughout this book the Divine Name is shown in Hebrew with no vowel points. As much as I don’t like seeing that in the English text, it is probably the most noble way of dealing with this issue. Pronunciation of the name is a major point of division among Messianic and Hebrew Roots groups. In fact, I disagree with the conclusion this author comes to in his introductory pages – but he is very respectable and well documented in presenting his case. And after the five short pages in the introductory section, he never mentions it again. It is handled well.

The transliteration is a little different than what I am used to using. But there isn’t a standard way of transliterating Hebrew, and it is consistent throughout this book. Again, it is handled well.

This is a very thorough and well done Messianic Siddur. It is well organized, and covers the service, blessings and prayers most applicable to followers of Messiah Yeshua while maintaining traditional Jewish liturgy. The layout is user-friendly, consistent, and very easy to follow. I just hope the Messianic Siddur for Shabbat continues to remain available to the public.