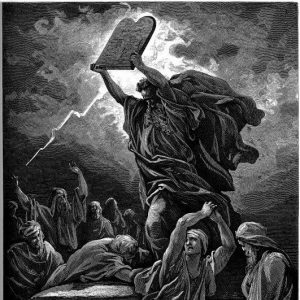 During a study of Torah portion Ekev, a gentleman in our group was talking about the “other ark” and asked me what I knew about it. Honestly, I had no idea what he was talking about, and asked him to explain. He opened up his Bible and started to read from the weekly portion – something I had already read before we gathered for study.  But I had completely missed what he was now pointing out.

In this passage, Moses is recounting for the Israelites the events following the infamous “Golden Calf” incident. He is about to ascend the mountain again to receive replacement tablets. This is before any of the articles for the Tabernacle have been constructed, including the Ark of the Covenant, which Scripture clearly says was made by someone else – Bezalel (Exodus 37:1). Yet, here Moses describes an ark that he made before going up the mountain:

How is it that I had read this so many times without seeing it? After I returned home (the original question was posited during a study with incarcerated men at a prison), I checked several Christian commentaries. All used various methods to explain away how this must have been the same Ark of the Covenant, even though the text seems to say otherwise. Then I came across this from a Jewish source, the Stone Edition Chumash:

10.1-5 A temporary Ark and the Second Tablets
At the end of the forty days of prayer, Moses was instructed by God to prepare new Tablets upon which He would inscribe the Ten Commandments again. To hold these Tablets, as well as the shards of the broken ones, God had Moses make a wooden Ark, which would be used until the permanent Ark of the Tabernacle was built (Exodus 25:10-22). Rashi cites one view that after the permanent Ark was made, the broken Tablets were left in this wooden Ark, and it was the one that accompanied the nation into battle (Yerushalmi Shekalim 6:1). Rambam, however, notes that the majority opinion there is that two Arks were never in simultaneous use. Until the Tabernacle was built, both the whole and the broken Tablets were kept in the wooden Ark; after the Tabernacle was ready, both sets of Tablets were transferred to the permanent Ark, and the wooden Ark was hidden.

Here was something else I had not considered before: What happened to the broken pieces of the original tablets? These were carved out by the hand of God; written by the finger of God (Exodus 31:18). Were they left laying in the dust at the foot of the mountain? Or is it more likely that they were gathered up and kept, maybe even with the replacement tablets Moses had carved, as the sages have suggested?

This was a new paradigm to me. For a few days after our study at the prison, I kept thinking about the other ark and the broken pieces of the tablets. Then I received an unexpected letter from Tom, a gentleman I correspond with who is incarcerated at another prison. I’ve posted a few things he has written here on The Messianic Light.  His letter included not only his thoughts on this same Torah portion, but a very personal application in his own life. I hope you are blessed as you read.

Jewish Rabbis teach that “the whole tablets and the broken tablets nestled inside the Ark of the Covenant.” The Hebrews proceeded to gather the broken fragments of the first set of tablets and had them stored in the Ark, in the Tabernacle, together with the second whole tablets. Both sets of tablets were later taken into the land of Israel and kept side-by-side in the Holy of Holies in the Temple in Jerusalem.

In its eulogy for Moses, the Torah chooses this episode of smashing the tablets as the highlight and climax of Moses’ achievements. In the closing verses of Deuteronomy we read, “Moses, the servant of God, died there in the land of Moab… and there arose not since a prophet in Israel like Moses, whom God knew face to face; all the signs and wonders which God sent to do in the land of Egypt… that mighty hand, those great fearsome deeds, which Moses did before the eyes of all Israel.” What did Moses do “before the eyes of all Israel?”  Rashi, in his commentary on Torah, explains “that his heart emboldened him to break the tablets before their eyes, as it is written, ‘and I broke them before your eyes’” [Deuteronomy 9:17].

… Why does the Torah choose this tragic and devastating episode to capture the zenith of Moses’ life and as a theme with which to conclude the entire Torah, all five books of Moses?!

… Moses did not break the tablets because he was angry and lost control. Rather, the breaking of the tablets was the beginning of the healing process. Before the golden calf was created, the Hebrews could find God within the wholesomeness of the tablets, within the spiritual wholesomeness of life.  Now after the Hebrews created the golden calf, hope was not lost. Now they would find God in the shattered pieces of a once beautiful dream.

… Truth is found not only in wholesomeness, but also, sometimes primarily, in the broken fragments …

We often believe that God can be found in our moments of spiritual wholesomeness. But how about in the conflicts which torment our psyches? How about when we are struggling with depression, addiction or confusion? How about when we face despair or pain? How about in the very conflict between a godless existence and a God-centered existence? We associate “religion” with “religious moments.” But how about our “non-religious moments?”

Torah closes stating, “since then there has not arisen in Israel a prophet like Moses” (Deuteronomy 34:10). Yet God himself, through Moses, had promised that one day there would (Deuteronomy 18:15,18). Both Peter and Stephen identified Yeshua as the fulfillment of that promise (Acts 3:22; 7:37). And like the perfect, God-written tablets that were shattered in the eyes of the people, “He was wounded for our transgressions, He was bruised for our iniquities; The chastisement for our peace was upon Him, And by His stripes we are healed” (Isaiah 53:5 NKJV). In the broken pieces of the tablets we can see a picture of Yeshua, and restoration for the brokenness in each of us.

But He emptied Himself—taking on the form of a slave, becoming the likeness of men and being found in appearance as a man. He humbled Himself—becoming obedient to the point of death, even death on a cross. For this reason God highly exalted Him and gave Him the name that is above every name, that at the name of Yeshua every knee should bow, in heaven and on the earth and under the earth, and every tongue profess that Yeshua the Messiah is Lord—to the glory of God the Father (Philippians 2:7-11 TLV).

Tom concluded his letter with these words:

…In my journey to <prison name redacted> I became lost among my fragments and my brokenness. I clung to emotional baggage and retarded my healing. I hit rock-bottom with drug use, drug overdoses, and suicide attempts. I’ve found the light and joy in my fragments. It was a lesson in humility; a lesson to accept who I am without all the negative connotations of a false persona. I am a believer, a man of God and in that I need nothing more. I accept my flaws, failures, and weaknesses, just as I accept my qualities, successes, and strengths.

So He [Yeshua] came to Nazareth, where He had been brought up. And as His custom was, He went into the synagogue on the Sabbath day, and stood up to read. And He was handed the book of the prophet Isaiah. And when He had opened the book, He found the place where it was written:

The Spirit of the Lord is upon me, because He has anointed me to preach the gospel to the poor; He has sent me to heal the brokenhearted, to proclaim liberty to the captives and recovery of sight to the blind, to set at liberty those who are oppressed; to proclaim the acceptable year of the Lord.

Then He closed the book, and gave it back to the attendant and sat down. And the eyes of all who were in the synagogue were fixed on Him. And He began to say to them, “Today this Scripture is fulfilled in your hearing.”
(Luke 4:16-21 NKJV)