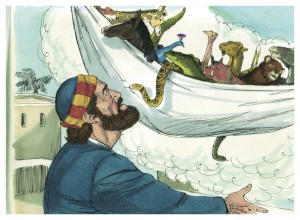 The account of Peter’s vision in Acts chapter 10 is often used to show that the food laws given in the Torah are no longer applicable. Is there more to it than that? Is that even a part of what is going on? What did Peter himself have to say about it?

Here is how most people would relate this story: Peter went up on the roof. While he was praying, he had a vision of a large sheet full of pigs, rabbits, squirrels, snakes, possums, snails and all sorts of other unclean animals. God told him to kill them and eat them, but Peter responded that he had never eaten anything unclean. At that point, God told Peter that He had cleansed them and they were not longer unclean. He was now permitted to eat whatever he wanted.

But is that really what happened in Peter’s vision?

The next day, as they were on their journey and approaching the city, Peter went up on the housetop about the sixth hour to pray. And he became hungry and wanted something to eat, but while they were preparing it, he fell into a trance…
(Acts 10:9-10)

So far so good – Peter did go up on the roof to pray. And there he did have a vision.

…and saw the heavens opened and something like a great sheet descending, being let down by its four corners upon the earth. In it were all kinds of animals and reptiles and birds of the air.
(Acts 10:11-12)

Did you catch that? “All kinds…” Not just unclean animals like pigs and rabbits, but clean animals as well – all kinds. Cows, goats, and chickens right along with the pigs, possums and hawks. They were all together in that sheet.

Here is where we have to be careful. We could assume that God told Peter to take his pick of anything in the sheet and prepare it for his dinner. That would mean that God was at this point making a change in what was permissible and what was not permissible. That would seem out of character, something that up to this point has never happened with anything that God had previously designated as forbidden. But for now we’ll hold that as one of the possibilities.

Another possibility is that God told Peter to select something from among the clean animals and prepare that for his dinner. If that is the case, then God is being consistent with his previously established instructions with no changes. But why, then, would Peter refuse?

Peter refused – actually told God “No” – because in his eyes there wasn’t anything “clean” in that sheet to eat. We can tell that from his response. Peter said “I have never eaten anything that is common1 or unclean2.” Peter would never have eaten the pig that was in the large sheet. However, Peter would also never have eaten the cow that was in the sheet with the pig. In his religious view, the cow had to be kept completely separated from the pig if it was to be fit to eat. Because the cow was with the pig, the once holy and clean meat had now become “common,” and Peter believed that if he ate it he would be defiled.

And the voice came to him again a second time, “What God has made clean, do not call common.” This happened three times, and the thing was taken up at once to heaven.
(Acts 10:15-16)

There is no basis from this vision to conclude that the animals God had previously stated were unclean were now acceptable to be eaten as food. One might conclude from this vision that the ritual rules and regulations of the religious teachers should not determine what was fit to eat. But looking at what happens next and by Peter’s own words, we know that even this was not the intent of the vision.

To understand any Biblical passage (or any non-biblical instruction for that matter) we need to look at the context. The story begins at the start of Acts chapter 10. A God-fearing Roman soldier by the name of Cornelius had also seen a vision in which an angel instructed him to send for Peter. The problem is Cornelius, being a gentile, was considered by the Jewish people, including Jewish believers in Yeshua like Peter, to be “common.” In Peter’s religious view, even though he was a God-fearer this gentile was second-class and unfit – just like the cow that was hanging out with the pig.

Prior to his own vision, Peter might not have ever gone with the men Cornelius had sent to get him. And even if he had, he would not have interacted with them on equal terms. So before the men from Cornelius arrived, God had to get Peter’s attention and correct his thinking. Peter confirmed that this was the meaning of the vision when he went to Cornelius and told him, “Truly I understand that God shows no partiality,” or as the familiar King James Version puts it, “God is no respecter of persons” (Acts 10:34).

There is an interesting twist, though, in how Peter relates the story to Cornelius and his men. Note that he tells them, “God has shown me that I should not call any person common or unclean” (Acts 10:28). But in this vision, God did not say anything about “unclean.”

When it came to eating the animals in the sheet, Peter knew which ones were unclean and considered the others to either be clean or clean but defiled (common). God had already established what was clean and unclean in Leviticus 11 and Deuteronomy 14, and Peter could have easily made that determination. So why would he now say that he can’t call anyone common or unclean? When did God tell him that?

But the Helper, the Holy Spirit, whom the Father will send in my name, he will teach you all things and bring to your remembrance all that I have said to you.
(John 14:26)

Peter had spent three and a half years with Yeshua. During that time, Yeshua told his disciples, including Peter, a parable about wheat and weeds (tares, or darnel, weeds that look a lot like wheat). And just to be certain they got it right, Yeshua explained the parable in detail.

There is one key part of the story that I believe must have come to Peter’s mind as he stood before Cornelius and a room full of gentiles.

So when the plants came up and bore grain, then the weeds appeared also. And the servants of the master of the house came and said to him, “Master, did you not sow good seed in your field? How then does it have weeds?” He said to them, “An enemy has done this.” So the servants said to him, “Then do you want us to go and gather them?” But he said, “No, lest in gathering the weeds you root up the wheat along with them. Let both grow together until the harvest, and at harvest time I will tell the reapers, ‘Gather the weeds first and bind them in bundles to be burned, but gather the wheat into my barn.’”
(Matthew 13:26-30)

Peter had no way of knowing who among the people was clean or unclean, and it was not his place to make that determination. He could not risk causing irreparable spiritual harm to true believers by rejecting someone he thought was unclean. Remembering the words of Yeshua, Peter explained, “God has shown me that I should not call any person common or unclean.”

I have had the opportunity ministering to those in prison to know some men that many religious people would consider “second class.” A few of them have done some pretty awful things, even taking the life of another person. But God has opened the door for me to go into the Indiana Department of Correction and share my faith, facilitate Bible studies and even hold a Passover Seder (I mean the whole thing!). It is not my place to call any of them “common” or “unclean” for my God does not show partiality.

Do you remember back as a child not touching somebody so you wouldn’t get cooties? That was silly, and as adults we chuckle at that idea. Yet, in perhaps a less “silly” way, we do the same thing. Are you looking down on someone, or on some group of people? Is there somebody who, in your eyes, just isn’t worthy enough – somebody who, compared to you, is second class?

Yeshua didn’t hesitate to minister to those considered the lowlifes and outcasts of his day, even though the religious leaders said, “If this man were a prophet he would have known who and what sort of woman this is who is touching him, for she is a sinner” (Luke 7:39) . I’m not suggesting that we blend in and become one of the “sinners.” But keep in mind, “such were some of you. But you were washed, you were sanctified, you were justified in the name of the Lord Jesus Christ and by the Spirit of our God.” (1 Corinthians 6:11). Our responsibility, like Peter’s, is to go wherever God send us or attend to whoever He brings our way.

Oh, for anyone who may have read this looking for justification in eating that pork chop or shrimp cocktail, sorry. This passage won’t work. You will have to keep looking elsewhere.

Unless otherwise noted, all Scripture quotations are from The Holy Bible, English Standard Version, copyright ©2001 by Crossway Bibles, a publishing ministry of Good News Publishers. Used by permission. All rights reserved.