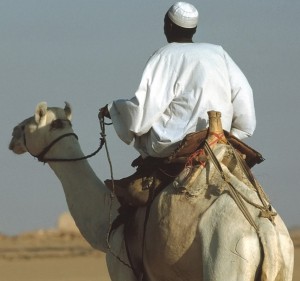 It is often said that there are three monotheistic religions in the world today – Judaism, Christianity and Islam. It is also often suggested that these three religions – Judaism, Christianity and Islam – all worship the same God, though with different understandings. Is this really true? Is the Muslim Allah, revealed in the Quran (or Koran), the same as the God of Israel revealed in the Tanach (the Hebrew Bible, the Old Testament) and revered by both Christians and Jews?

I understand that the Arabic word “allah” is the equivalent of our English word “god.” Please do not let that influence how we answer this question. When a Muslim says “Allah” he is referring to a specific being, just as when a Christian or Jew says “God.” They are more than just titles.

Certainly there are similarities.

Muslims even believe parts of the Bible, though they say much of it is corrupted or distorted. It seems as though Yahweh, the God of the Bible, and Allah may be the same.

According to the Quran (Sura 29:46), Allah and the God of “the People of the Book” (Jews and Christians) are the same. Muslims believe this. The Quran contains stories and references to a lot of the people found in the Bible, including Noah, Abraham, Moses, David, even Zacharias and John the Baptist, and Mary and Jesus (using Arabic equivalent names). Many of these are very similar to what we read in the Bible. Some are taken from extra-Biblical Jewish literature, such as the story of Abram and his father Terah’s idols (compare Sura 21:52-69 and Jashar 11:13-12:35).

So is their God the same as ours?  It looks like he could be.

Are Saint Nicholas and Santa Claus the same person?

It is pretty common today to refer to Santa Claus as Saint Nicholas or Saint Nick.

In the Roman Catholic Church (and some others), Saint Nicholas is the patron saint of children, as well as sailors, merchants, archers, brewers and a few others. He was born in what is now modern-day Turkey in the third century CE. He was a bishop in the early Roman church, attended the First Council of Nicaea and was one of the signers of the Nicene Creed. He was a well-respected and deeply religious man. Nicholas is said to have performed miracles, including raising someone from the dead.

During the fourth century he became known for his frequent, secret gift-giving. One of the most well-known stories tells of him secretly and in disguise tossing three small bags of gold coins through the window of a very poor man who had three unmarried daughters. The gold provided the dowry for this man’s daughters, enabling them to marry and thus saving the family from public disgrace.

Saint Nicholas was a real person.

Santa Claus, according to legend, is also a secret gift-giver. He knows all the good and bad things children have done, and on Christmas Eve he travels through the air in a sleigh pulled by flying reindeer bringing gifts to boys and girls who have been good throughout the year. We all know that he wears a red suit, enters homes through the chimney, smokes a pipe and drinks Coca-Cola. Somehow during the weeks leading up to Christmas, Santa Claus is able to clone himself and appear in department stores and malls so that children can tell him what kind of gifts they want for Christmas.

At the risk of disappointing some of you, I must tell you that Santa Claus is not a real person. He is a fictional character based in part on the real-life person of Saint Nicholas. A few of the stories and sayings that make up the fictional history of Santa Claus may actually be true, or at least rooted in truth. But the person of Santa Claus is the product of the imagination. You know you will not find a jolly fat man in a red suit landing a flying sleigh on housetops and dropping down chimneys with a bag of toys.

Yahweh, the God revealed in the Bible, is real. The men and women described in the Bible are real, and a real God interacted with them.

The Muslim Allah, on the other hand, is not real. He is a fictional character based in part on the very real Yahweh. The Quran, written down by Mohammed in the early seventh century, has some passages that are similar to the Bible. It uses the names of real people in the Bible, and uses some of the actions and characteristics of the real God to describe the Muslim Allah. Some of the stories and references may, in fact, be true. Some of them are distorted versions of truth. Some of them, however, have simply been created to support the desired fictional character of Allah. He is no more real than Santa Claus.

No, they are not. Not any more than Saint Nicholas and Santa Claus are the same. One is very real, and the other is a fictitious aberration loosely based on the real thing. Jews, Christians and Muslims do not worship the same God. Yahweh is not the Allah of Islam.