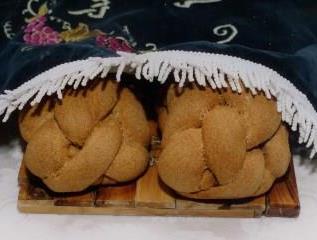 The Feast of Shavuot, or Feast of Weeks, is celebrated in late spring at the time of the early wheat harvest in Israel. In Scripture, it is sometimes called the Feast of First Fruits. The exact Hebrew date is not specified in Scripture. This year, if you recognized First Fruits and started counting the Omer on Sunday, April 9, then Shavuot is observed on Sunday, May 28, 2023. For Jewish congregations that began the Omer count on Friday, April 7, Shavuot is observed on Friday, May 26.

Shavuot is at the end of a period of counting fifty days, or seven weeks – thus the name Shavuot, a Hebrew word meaning “weeks,” or Pentecost, from a Greek word meaning “fiftieth.” It is a most unusual holiday, in that neither the date for Shavuot nor the date for beginning the counting of fifty days is stated. The timing is debated, as I explain in my post Shavuot – The Undated Holiday. But don’t worry about getting the date precisely right.

Shavuot, the Feast of Weeks, is one of the three “pilgrimage festivals” commanded in Torah.

Shavuot in the Tanakh

The first mention of the Feast of Weeks in the Tanakh (Hebrew Bible, the Old Testament) is in Exodus 23. In this passage, Shavuot is called “the Feast of the Harvest of the first fruits.”

Three times a year you shall celebrate a feast to Me. You shall observe the Feast of Unleavened Bread; for seven days you are to eat unleavened bread, as I commanded you, at the appointed time in the month Abib, for in it you came out of Egypt. And none shall appear before Me empty-handed. Also you shall observe the Feast of the Harvest of the first fruits of your labors from what you sow in the field; also the Feast of the Ingathering at the end of the year when you gather in the fruit of your labors from the field. Three times a year all your males shall appear before the Lord GOD.
(Exodus 23:14-17)

The instructions are simply to observe a חג chag, a feast (Strong’s Hebrew word #H2283) of the harvest of the first fruits. Chag is derived from the root חגג chagag (#H2287) meaning to dance in a circle, stagger, maybe get a little tipsy. It is certainly to be a joyous celebration.

Although the name Shavuot is never mentioned in Leviticus 23 along with the rest of the appointed times, it most certainly is described in verses 16-21. Numbers 28:26-30 describes offerings associated with this feast. All three pilgrimage festivals are mentioned following the dedication of Solomon’s Temple in 2 Chronicles 8:13.

The celebration described in Leviticus 23, along with animal, grain and drink offerings, includes two very large loaves of freshly baked leavened bread. No explanation is offered as to why two such loaves are waived by the priest before the LORD; only that they are. You can find various interpretations of the two loaves expounded, but I am not going to attempt to apply one of them here. It seems to be appropriate for an early wheat harvest festival.

In the Biblical record, Shavuot is a harvest festival. It was later recognized as the day the Torah (Law) was given from Mount Sinai, though there isn’t universal agreement on the day. According to the Talmud, Tractate Shabbat 86b:

The Sages taught: On the sixth day of the month of Sivan, the Ten Commandments were given to the Jewish people. Rabbi Yosei says: On the seventh day of the month. Rava said: Everyone agrees that the Jews came to the Sinai desert on the New Moon, as it is written here: “In the third month after the children of Israel were gone forth out of the land of Egypt, the same day came they into the wilderness of Sinai” (Exodus 19:1), without elaborating what day it was.

Shavuot/Pentecost in the New Testament

Pentecost, the Greek name referring to Shavuot, is mentioned three times in the New Testament. None of them are in the Gospels, and though we can assume Yeshua observed this commanded festival every year, we have no record of it. Some have suggested that an unnamed “feast of the Jews” or more properly “feast of the Judeans” in John 5 may be Shavuot/Pentecost. In Acts 21 it says that Paul sailed by Ephesus so that he would not spend time there and be able to make it to Jerusalem for Pentecost. In 1 Corinthians 16, he says he stayed at Ephesus until Pentecost. Perhaps these are two different instances.

The first mention and most well-known account of Pentecost is in Acts chapter 2.

When the day of Pentecost had come, they were all together in one place.
(Acts 2:1)

From the day of Shavuot/Pentecost immediately following the resurrection of Yeshua, Shavuot is associated both with the giving of the instructions of Torah and the empowering of believers with the Holy Spirit. Yeshua stated that “true worshipers will worship the Father in spirit and truth” (John 4:23) and affirmed while praying to the Father, “Your word is truth” (John 17:17).

The narrative goes on to describe “all” of them (no description of who “all” is) being filled with the Holy Spirit, no doubt in fulfillment of a prophecy Yeshua gave them recorded in Acts 1:8. We aren’t told the date of Pentecost or even what day of the week it was (did you think it said the first day of the week, Sunday? Read Acts 2 again). Meeting in Jerusalem on the day of Shavuot is in keeping with the Torah commandment.

There is one other thing that does not appear in the Acts 2 story of Shavuot/Pentecost. Well, that actually depends on which Bible translation you are reading, or rather which source text your translation is using. The Alexandrian texts, which are widely considered to be older, do not have the Greek word ekklesia, commonly translated as “church,” anywhere in this chapter. The more recent Textus Receptus used for the King James Version, has this word added in the last verse. Some have concluded that Pentecost, as recorded in Acts 2, is the “birth of the church.” This is not accurate. Even if the King James text was correct, it still does not say this – it just says God added to the congregation.

The traditional Scripture readings for Shavuot are from Exodus 19 and 20, preparing for and receiving the Ten Commandments. The Haftarah reading in the Prophets is from Ezekiel 1, describing God’s glory and reminding the reader of the fire, smoke, thunder and lightning on Mount Sinai. In addition, it is traditional to read the megillat or scroll of Ruth. The story of the redemption of Ruth is set during the barley and wheat harvests.

Because Shavuot is at the time of the giving of the Torah from Mount Sinai, it is a tradition to stay up night of Shavuot (before the Day of Shavuot) reading and studying Torah.

It is also a tradition to eat dairy on Shavuot, specifically cheese blintzes and cheesecake. There are a variety of explanations for this, but it seems no one really knows for certain why we do this. Most commonly it is suggested that the Torah is nourishing, like milk. The apostle Peter wrote about the “pure milk of the word” (1 Peter 2:2), and although rabbinic Jews would not care what Peter wrote, it is an indication that Peter, a Jew and a disciple of the Jewish Messiah, had this understanding.

Shavuot is the celebration of the First Fruits of the harvest, to be followed at the end of the year by Sukkot, the Feast of Ingathering (see the descriptions in Exodus 23:14-17 posted above). The New Testament account of Shavuot in Acts 2 demonstrates the harvest of First Fruits by the great addition to the community of believers.

Peter said to them, “Repent, and each of you be baptized in the name of Jesus Christ for the forgiveness of your sins; and you will receive the gift of the Holy Spirit. “For the promise is for you and your children and for all who are far off, as many as the Lord our God will call to Himself.” And with many other words he solemnly testified and kept on exhorting them, saying, “Be saved from this perverse generation!” So then, those who had received his word were baptized; and that day there were added about three thousand souls.
(Acts 2:38-41)

As mentioned, it is tradition to read the story of Ruth on Shavuot. Ruth was, as we know, the great-grandmother of King David. She is mentioned in the genealogy of Messiah Yeshua in the book of Matthew.

In the Talmud, the sages point to the six measures of barley given by Boaz to Ruth prior to her redemption as being prophetic of six of her descendants, one of them being the Messiah. This comes from Tractate Sanhedrin 93b:

The Gemara asks: And is it the typical manner of a woman to take a heavy burden of six se’a of barley? Rather, Boaz alluded to Ruth that six descendants are destined to emerge from her who would each be blessed with six blessings, and these are they: David, and the Messiah, Daniel, Hananiah, Mishael, and Azariah.

Directions:
Mix crepe ingredients. Add butter to crepe pan or skillet. Pour about 1/2 cup of batter onto pan forming a large circle. Cook on one side only until the crepe starts to blister and the edges curl away from skillet. Ease onto a board fried-side up. Continue with rest of batter, adding butter as needed.
Mix filling ingredients. Place about 2 Tablespoons of filling on the cooked side of each crepe. Fold the top and bottom to the center. Roll the sides over. Return to pan and fry until the center is cooked.

Shavuot – the Undated Holiday
Shavuot – Pentecost, the Feast of Weeks
On Shavuot
The Love of God

1 thought on “Shavuot for Believers in Yeshua”