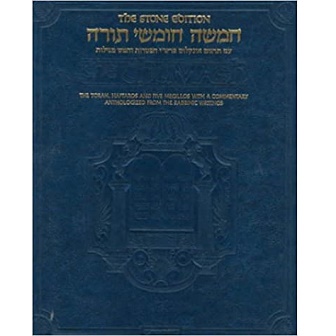 According to the publisher, “ArtScroll is the official imprint of Mesorah Publications… ArtScroll publishes scholarly and popular works for the Jewish world from a Torah observant perspective.”

This post will look at The Stone Edition Chumash, published by Artscroll and named after Jewish philanthropist Irving I. Stone, founder of the American Greetings card company. The Stone Edition Tanach also bears his name. But first, here are some general thoughts on the chumash. 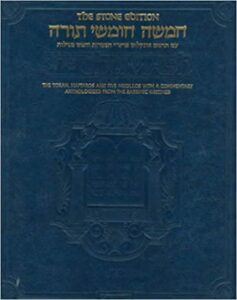 What Is a Chumash?

Simply put, a chumash is a printed book containing the five books of the Torah, as opposed to the Sefer Torah that is a hand-written scroll. The name comes from a Hebrew term meaning one-fifth (consider chamesh, Strong’s #2568, the number “five”). Like other Jewish Bible editions, a chumash is divided up into the Torah portions and, in most cases, also includes the haftarah readings.

Though I haven’t been able to find any statistical data, it seems The Stone Edition Chumash is probably the most popular. There are many other chumashim (plural of chumash). Here are a few:

To be clear, I do not endorse the commentary in any of these chumashim. They are written by men who do not believe that Yeshua is the Messiah, though there is a broad variety of thought presented. I did find one Messianic chumash, the Messianic Torah with Commentary…Plus! by Gary Gardner. I plan to review it in the future.

The chumash is structured around the weekly portions for the annual Torah cycle. So why would believers in Yeshua want to read the weekly Torah portions? Besides this annual cycle offering an ordered way to study the Torah, it is a great way to connect with the Jewish community, both Messianic Jews and those who do not (or do not yet) believe in Yeshua as Messiah. The calendar and selected readings are also built around the annual moedim, or Appointed Times. It just keeps everyone in sync.

I have not found a chumash with readings based on a triennial cycle.

The main section of The Stone Edition Chumash is the five books of the Torah. This is followed by the Haftarah readings, including special Haftarot for the festivals. The next section is the five Megillot – the books of Esther, Song of Songs, Ruth, Lamentations, and Ecclesiastes – that are read on specific holidays. The Stone Edition Chumash concludes with charts, a bibliography and an index (similar to the maps, concordance and such at the end of a Christian Bible). Finally, there are several pages of blessings for the Sabbath which are entirely in Hebrew.

The layout of the main section is a two-page spread. On the facing pages, the right-side page includes the Masoretic text in Hebrew with vowel points and cantillation marks. Next to it, in smaller font, is Targum Onkelos for the same passage. Immediately below these is commentary by Rashi written in Aramaic. Below this is verse-by-verse rabbinic commentary in English.

On the facing left page is an English translation of the Hebrew Masoretic text identical to that in the Stone Edition Tanach, and below that is a continuation of the verse-by-verse rabbinic commentary in English. The Targum Onkelos is not translated, nor is the Aramaic text of Rashi which may not be very useful to most of us.

I am not including an actual sample page here for copyright reasons, but you can view a few pages of Parashat Bereshit, the first Torah portion from Genesis 1, at Amazon (click on “Look Inside” above the image). When you view the individual pages, Page 2 is the right side and Page 3 is the left side of the two-page spread.

Features of The Stone Edition Chumash

While I have not researched it enough to comment on the quality of the English translation, it is always beneficial to have several translations on hand to compare when you study. In this case, we have the Hebrew text alongside which can be helpful for students learning to read the language. It isn’t interlinear, but that is an option I will cover later.

As previously mentioned, the Stone Edition Chumash is divided into Parashot, the 54 divisions of the Torah for annual reading. Beyond these portions are further traditional divisions within the Parashah that break it up into seven aliyot and a final maftir section to assist in public reading. These are marked in the margins of the Hebrew text but not the English translation.

There is more to the annual cycle than just dividing up the Torah into weekly portions, some of which are scheduled around holiday readings. Because on the Hebrew calendar some years have 12 months and some have 13 months, it is often necessary to combine a few of the readings so that the cycle is completed by the end of Sukkot, the Feast of Tabernacles. At the end of each Parashah, notes explain how certain readings are combined, and when the Haftarah readings might change depending on how the weekly Sabbath falls in relation to holidays and special observances.

This might seem a little strange or confusing to those of us who are used to living by the Gregorian calendar, but it is all very natural on the Hebrew calendar. For example, the first Torah portion, Bereshit (In the Beginning), is read on the Sabbath following the end of Sukkot, the Feast of Tabernacles (actually, following Shemini Atzeret, the Eighth Day Assembly). On the Gregorian calendar that could be any time in the month of October, or on very rare occasions the end of September or beginning of November. But on the Hebrew calendar, it is always the last Sabbath of the seventh month, Tishrei, between the 24th and 29th of the month. The second portion, Noach (Noah), is always read on the first Sabbath in the eighth month, Cheshvan.

The interlinear format of The Schottenstein Interlinear Chumash makes studying the Hebrew text easier for those of us who are not accomplished at reading Hebrew. With this format, the English text is printed directly below each line of Hebrew text, so you can see how each Hebrew word is translated. Even though Hebrew is written right-to-left and English is written left-to-right, the words and phrases are written in a way that is easy to follow. The English text is nearly identical to the English in The Stone Edition Chumash, except that following the Hebrew word order sometimes requires a change.

Each page of The Schottenstein Interlinear Chumash contains the Hebrew and English interlinear text at the top of the page, Rashi in Aramaic in the middle of the page and the English commentary in the lower portion. Like the Stone Edition Chumash, this one also includes Targum Onkelos in smaller Hebrew only in a box in the inside upper corner.

The Schottenstein Interlinear Chumash, like The Stone Edition Chumash, is published in a single volume or in five individual volumes. My Stone Edition is a single volume, but I have the Interlinear in separate volumes for each book. The information is the same, but the order may be a little different. For example, in my single volume of Bereshit (Genesis), the Haftarot for each portion of Bereshit only is at the back. It is also in interlinear format. Special readings for Shabbat (Sabbath), Rosh Chodesh (the new month) and Chanukah (the Feast of Dedication) are included because Chanukah will always fall during the reading of the portions in Bereshit.

Remember, the commentary in The Stone Edition Chumash, The Schottenstein Interlinear Chumash, and most of these other Chumashim is comprised of the writings of men who do not believe that Yeshua is the Messiah. They are not something to consult for sound theology. If you want to expand your library, consider these for their perspective on Jewish thought or for logistical reasons such as navigating the Torah portions.