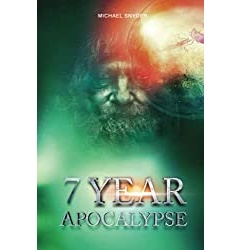 7 Year Apocalypse by Michael Snyder is a book about both Bible prophecy and current events. Published in mid-2021, some of the things that were on the horizon then are now happening or have already happened.

Snyder has both a J.D. (Doctor of Jurisprudence) and L.L.M. (Master of Laws) from the University of Florida Law School as well as an undergraduate degree in commerce from the University of Virginia. Besides his education and his work in Washington D.C. as an attorney, his insight comes from years of following and analyzing current financial and political events. In addition to his books, he writes on his websites The Economic Collapse Blog, End Of The American Dream, and The Most Important News. It is not surprising that his studies would bring him to the conclusions in this most recent book.

The author postulates that we are on the verge of a seven-year apocalyptic time prophesied in the Bible in Daniel 9, Matthew 24, and the book of Revelation. He points to specific signs that this period is about to begin and seeks to prepare the reader for what lies ahead. Most importantly, the offer of salvation through faith in Jesus is repeated throughout this book.

Snyder divides this seven-year time frame into two periods of three and a half years. The dividing point of the apocalypse is the rise of the Antichrist, though he acknowledges that the name “Antichrist” is not to be found in the book of Revelation. (I would add that this name is also not found in either Daniel 9 or Matthew 24 – or anywhere outside the letters of First John and Second John.) The sequence of chapters in 7 Year Apocalypse reflects this important division of time.

The author appears to write from a futurist and premillennial position on Revelation and seems to subscribe to an essentially literal interpretation. I say “essentially literal” because there are obviously some parts of John’s vision that cannot be taken literally – for example, in Revelation 12:3 John sees “a great red dragoon having seven heads and ten horns” and calls it a sign appearing in heaven. Snyder describes the two witnesses as real people killed by the Antichrist after three-and-a-half years. He does not state what he thinks the “mark of the beast” will be, but clearly believes it is a literal, visible mark on those who take it.

Futurist is one of four primary interpretations of Revelation. The others are Historicist, Preterist, and Spiritual (Symbolic or Idealist). Each has value and they should not be considered mutually exclusive or incompatible. For a great overview on all four interpretations, I recommend Steve Gregg’s Revelation: Four Views, A Parallel Commentary.

Snyder does not accept the relatively new and popular pre-tribulation rapture teaching, and I concur. He fully refutes it in his book The Rapture Verdict, and 7 Year Apocalypse does not regurgitate those arguments. The author points out that there are two events people think will mark the beginning of the seven-year tribulation period, neither of which are correct: this pre-tribulation rapture idea, and a seven-year “peace treaty” with Israel. He goes into detail with this second item. He then provides three Biblical signs that the seven-year period has started, and the unmistakable sign that the second half has arrived.

The reader can sense the urgency behind Snyder’s message: the time is short, and this 7 Year Apocalypse is quickly coming upon us. And while I personally do not favor a full “futurist” view of Revelation, the warnings and consequences detailed in this book are right on target. Whether or not the seals and trumpets of Revelation represent actual events in the final seven years, it can be said with near certainty that we are in the “last days.” Snyder goes into detail about the “Millennial Day Theory,” documenting the Judeo-Christian understanding that one day is a thousand years, and that God has a 7000-year plan for man – 6 “days” and then the Sabbath. You don’t have to be a young earth believer for that, you only need recognize that it has been about 6000 years since the time of Adam. We are about to enter the Sabbath Millennium.

A Couple of Downsides

Snyder uses a lot of Scripture in support of his views (which is great!), but if there is one thing I didn’t like about this book it is his use of the King James Version. I realize some will disagree, though. Besides the awkwardness of the style, there are a couple of places where the text reads differently from (what I consider to be) more accurate Alexandrian versions, like the added phrase in Revelation15:2 and the rendering of Revelation 22:14. In both cases, it is the source text that is at fault, and overall it doesn’t really change anything. It just bugs me.

He also mentions a few names that might raise an eyebrow for some people – John Paul Jackson, L.A. Marzulli, and Steve Quayle for example. For people who recognize those names, they probably either embrace them or dismiss them. I think Michael Snyder has enough credibility of his own and identifying with controversial figures is unnecessary. But that’s my opinion, which of course is what this review is. These are minor distractions that do not diminish the message of the book, and you may not find them distracting at all.

Much of what Snyder writes either directly deals with things in the United States or with U.S interactions globally. That makes sense and should be of interest even to readers in other nations. The United States is a major world power and what happens here is important, even if prophecy is centered on the Middle East. Snyder is truly an expert on this subject. His previous book, entitled Lost Prophecies of the Future of America, covers a lot of things that are alluded to in this book.

This is where I find the most value and insight from 7 Year Apocalypse. Whether or not we on the verge of the final seven years of the sixth millennial day, there are Biblical admonitions regarding current events that we must heed, and there very well may be signs in the cosmos to draw our attention to these. As one example, Snyder dedicates a chapter to the phenomenon of a solar eclipse, something that has long been considered a sign of the gods in many religious faiths (my point, not his). He highlights the “Great American Solar Eclipse,” visible across the continent in 2017, as well as a similar one that will occur about seven years later in 2024. Their paths make a giant “X” across the United States, crossing in the area where Kentucky, Illinois, and Missouri meet. That, he says, is the middle of the New Madrid Fault.

Snyder warns that because the United States is or will be heavily involved in the dividing of the land of Israel – the two-state solution – God will literally divide the United States. A massive earthquake at the New Madrid Fault “will literally divide the country in half physically from the Great Lakes to the Gulf of Mexico. In fact, the rift that will be created will be so vast that it will actually form an entirely new body of water. In order to get across it, you will need to fly, because all existing roads and bridges from east to west will have been destroyed by the giant quake.” When will this happen? That cannot be known, but it is sometime after the dividing of Israel – a day, a month, a year, maybe longer, he says.

Of course, both 7 Year Apocalypse and Lost Prophecies Of The Future Of America go into greater detail. But here and in other political and economic situations, the author sounds critical warnings, warnings that are independent of where we are on the prophetic timeline, because God does not change.

The Most Important Thing

With that as a foundation, being keenly aware of what is going in the world around us and making the necessary preparation is essential. “It is going to take great strength and great courage to stand against the one world system during the times that are approaching. You have the opportunity to be a part of a greater adventure than anything Hollywood ever imagined, and in the end it may cost you your life. But in Revelation chapter 2, Jesus promises us that if we are faithful unto death that he will give us a crown of life.”

Michael Snyder writes from an evangelical Christian perspective and considers himself a part of the Hebrew Roots community. Readers will find 7 Year Apocalypse and his other books both informative and challenging.

Lost Prophecies of the Future of America (2020)

Living a Life That Really Matters (2017)