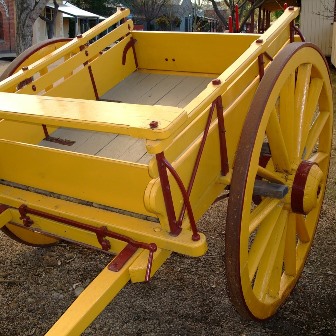 It was an exciting day – the worship team had prepared, the praise band was playing their instruments with all the energy they had to give, and the whole congregation was lifting their voices and hands in sincere heart-felt worship to welcome in the God of all creation. Then someone died.

That all happened before the COVID-19 pandemic and the suspension of public gatherings for worship. In fact, that happened over three thousand years ago.

Now David again gathered all the chosen men of Israel, thirty thousand. And David arose and went with all the people who were with him to Baale-judah, to bring up from there the ark of God which is called by the Name, the very name of the LORD of hosts who is enthroned above the cherubim. They placed the ark of God on a new cart that they might bring it from the house of Abinadab which was on the hill; and Uzzah and Ahio, the sons of Abinadab, were leading the new cart. So they brought it with the ark of God from the house of Abinadab, which was on the hill; and Ahio was walking ahead of the ark. Meanwhile, David and all the house of Israel were celebrating before the LORD with all kinds of instruments made of fir wood, and with lyres, harps, tambourines, castanets and cymbals.

But when they came to the threshing floor of Nacon, Uzzah reached out toward the ark of God and took hold of it, for the oxen nearly upset it. And the anger of the LORD burned against Uzzah, and God struck him down there for his irreverence; and he died there by the ark of God.
(2 Samuel 6:1-7)

Not too many years before this, the Ark of the Covenant, representing the presence of Yahweh, had been captured by the Philistine army. But the Philistines and their god couldn’t handle it, so they sent it back on an unaccompanied cart pulled by two cows. After it crossed the border into Judah, the Israelites took it to the house of Abinadab mentioned in this passage. Now it was time King David wanted to bring it to Jerusalem, the place where God had chosen to place his name. So he built another cart – a brand new one – and began the moving process.

We don’t have a description of the cart, but I’m sure it was quite ornate. After all, it was carrying the very presence of God. It was strong and sturdy, built from the finest wood. Perhaps it had intricate carvings or gold overlay. Maybe it was decorated with precious stones and fresh greenery and flowers. I doubt this looked like a moving van. It was probably more like a lavish parade float for a pageant of thirty-thousand people and a huge marching band.

Then the animals pulling the cart somehow upset it. Maybe they lost footing at a bump in the road, or maybe they were spooked by all the noise of celebration. We don’t know, but when the cart rocked a man reached out to protect the Ark of the presence of God. And God killed him. Why – because he touched the Ark? That was incidental. The problem was how that all came to happen in the first place.

Then the LORD spoke to Moses, saying, “Accept these things from them, that they may be used in the service of the tent of meeting, and you shall give them to the Levites, to each man according to his service.” So Moses took the carts and the oxen and gave them to the Levites. Two carts and four oxen he gave to the sons of Gershon, according to their service, and four carts and eight oxen he gave to the sons of Merari, according to their service, under the direction of Ithamar the son of Aaron the priest. But he did not give any to the sons of Kohath because theirs was the service of the holy objects, which they carried on the shoulder.
(Numbers 7:4-9, emphasis added)

Can you imagine God while all of this was going on?
“David, don’t do that.”
“David, that isn’t how you do this.”
“David, read the instructions.”
But David wasn’t listening. Out of his deep devotion to God and with pure motives, this righteous man after God’s own heart put together an amazing celebration of worship to honor the one true God who was his source of strength and salvation. David put every ounce of effort he had into praising the Holy One of Israel, the King of the Universe, the One who had defeated all of David’s enemies and given him this kingdom. David held back nothing in his worship, which he wholeheartedly believed was acceptable to his God. But it wasn’t.

Now someone was dead, the Ark of the presence of God wasn’t in the city, and David was angry and confused.

A few months later, David realized his mistake. Again he made preparations to move the Ark, this time doing it God’s way.

Did King David do everything right with the Ark from that point on? Actually, no. He had brought it to Jerusalem, but the Tabernacle Moses had constructed at God’s direction for him to dwell in was somewhere else.

And they brought in the ark of God and placed it inside the tent which David had pitched for it, and they offered burnt offerings and peace offerings before God… So he left Asaph and his relatives there before the ark of the covenant of the LORD to minister before the ark continually, as every day’s work required; and Obed-edom with his 68 relatives; Obed-edom, also the son of Jeduthun, and Hosah as gatekeepers. He left Zadok the priest and his relatives the priests before the tabernacle of the LORD in the high place which was at Gibeon, to offer burnt offerings to the LORD on the altar of burnt offering continually morning and evening, even according to all that is written in the law of the LORD, which He commanded Israel.
(1 Chronicles 16:1,37-40; cf. 1 Chronicles 21:29)

In the mean time, David gathered materials and even started work on the Temple – something else he wasn’t supposed to do. Getting things right certainly can be a learning process.

David’s mistake was three thousand years ago, and more than five hundred years after God gave the instructions to Moses. Our Messiah Yeshua walked this earth nearly two thousand years ago. Yet as early as the second century those said to be his followers were already building a “new cart.”

Early Christians continued to keep the Sabbath on the seventh day of the week as God instructed, and many also met together on the first day of the week in honor of Yeshua’s resurrection – not at his request, but of their own choosing. And that was fine, until they elevated that day above God’s Sabbath and eventually replaced it. Eusebius of Caesarea in the early fourth century said in his commentary on Psalm 91 (actually Psalm 92 the way we number them), “and so all the other things that one must observe on the Sabbath, these things we have transposed to the Lord’s Day.” And by “Lord’s Day” he meant the first day of the week, though the term is never used that way in Scripture. By this time, the Sabbath along with anything that appeared Jewish had been abandoned by most Christians.

Yet God has been very specific on His chosen day from the beginning.

Then God blessed the seventh day and sanctified [Strong’s #H6942, piel stem] it, because in it He rested from all His work which God had created and made.
(Genesis 2:3)

According to Brown-Driver-Briggs, קדשׁ (Strong’s #H6942 qadash) in the piel stem means:

1) to set apart as sacred, consecrate, dedicate
2) to observe as holy, keep sacred
3) to honour as sacred, hallow
4) to consecrate

That seems pretty clear. The seventh day of the week is to be set apart as holy, separate from every other day, and kept sacred. To substitute a different day is building a new cart. It is contrary to God’s instructions, and not acceptable to him.

Many things about worship are not specified, and God welcomes the sincere offerings of our hearts. It didn’t matter the style of the music David’s band played, and we know there is a great diversity in worship music today. Some of it we may not personally like, but that is not a matter of Scriptural instruction. It doesn’t matter if we play our instruments or use only our voices. Dancing, kneeling, laying prostrate, lifting or waving our hands, raising or bowing our heads – those are all, shall we say, discretionary acts of the worshiper. But choosing which day to keep as the Sabbath, if any at all, is not.

It is not wrong to gather together on Sunday (or Tuesday, or any other day). For many that may be the only opportunity for corporate worship available to them. But it is wrong not to observe the Sabbath. And it has nothing at all to do with being “Jewish” or living under the “Old Covenant.” When Yeshua said, “Is it not written, My house shall be called a house of prayer for all the nations” he was quoting timeless words from the prophet Isaiah.

Also the foreigners who join themselves to the LORD,
To minister to Him, and to love the name of the LORD,
To be His servants, every one who keeps from profaning the Sabbath
And holds fast My covenant;
Even those I will bring to My holy mountain
And make them joyful in My house of prayer.
Their burnt offerings and their sacrifices will be acceptable on My altar;
For My house will be called a house of prayer for all the peoples.
The Lord GOD, who gathers the dispersed of Israel, declares,
“Yet others I will gather to them, to those already gathered.”
(Isaiah 56:6-8, emphasis added)

There it is, right in the midst of the passage from which Yeshua quoted. It’s really the only outward sign listed here describing these foreigners (gentiles) desiring to come into covenant with the God of Israel.

There are many things that could constitute a “new cart” in worship, but abandoning the Sabbath may be the most profound. Let’s get rid of the new cart and start to carry the presence of God the way he instructed.