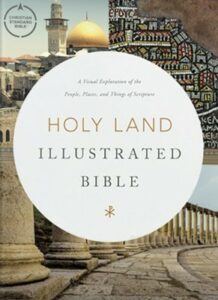 The CSB Holy Land Illustrated Bible is Holman Bible Publishers’ entry into the arena of visual and descriptive Bibles focused on historic Bible lands. In some ways it is comparable to Zondervan’s Archeological Study Bible (now out of print) and Cultural Backgrounds Study Bible. This Bible is chock full of pictures. According to the publisher’s description, it has:

• More than 1,100 images, maps, and illustrations with descriptive captions
• More than 275 full-length articles to provide greater insight and understanding
• Over 40 “Digging Deeper” callouts

Messianic and Hebrew Roots readers, and anyone with an interest in the Holy Land, will appreciate the pictures and the extensive articles that go with them. These articles are taken (according to the title page of this Bible) from Biblical Illustrator magazine, a quarterly publication from Lifeway Christian Resources. Lifeway is a division of the Southern Baptist Convention, and Holman Bible Publishers is a division of Lifeway. The Biblical Illustrator magazine is no longer published, and I have never personally read it.

The CSB Holy Land Illustrated Bible is not a “study” Bible, at least as it would normally be considered. There are no cross references and no doctrinal notes, only the articles focused on archeological, historical and geographical topics. The articles assume and often outright express that the Judeo-Christian account of historical events are true, and other stories are myth. This is especially evident in the Torah.

Though there are no study notes, the Bible text does contain all of the footnotes that are in the Christian Standard Bible text, which includes alternate translations and variant readings.

Each Bible book has an introductory page covering three topics:

• Circumstances of Writing
• Contribution to the Bible
• Structure

This Bible is surprisingly easy to read. The Bible text is in two-column paragraph format. The description says it uses 9.5-point type, which is larger than some Bibles marketed as “large print.” In publishing, a “point” is 1/72-inch, so full upper-case letters in 9.5-point type are a little more than 1/8-inch high. Text is black letter (I strongly discourage the use of “red-letter” Bible text in the New Testament). Holman has done a great job with the page layout.

The best way to get a feel for the CSB Holy Land Illustrated Bible is to actually see it. Holman Publishers has made a sample available as a PDF download that includes the complete book of Ruth. You can view it here. I am linking direct to Holman Bible Publishers for this sample rather than hosting it on The Messianic Light. If the link should cease to work, it is because the publisher is no longer offering the sample.

As the name suggests, this is a “Christian” Bible. It consists of the Old and New Testaments in 66 books. It does not include the books of the Apocrypha. The book order of the Old Testament follows the Septuagint/Christian order, not the order of the Hebrew Tanakh. Likewise, verse numbering follows the Christian order, not the numbering of the Hebrew Tanakh.

Messianic and Hebrew Roots readers will be interested in how a translation renders or otherwise identifies the Divine Name, in Hebrew Yod-Hey-Vav-Hey, commonly vocalized as Yahweh. Most Christian Bibles show it as LORD in small caps. When directly adjacent to other titles, you might see LORD God (Yahweh Elohim) or Lord GOD (Adonai Yahweh). The CSB follows this convention – but that wasn’t always the case.

The introduction to the original 2003 Holman Christian Standard Bible states,

The Holman CSB OT uses Yahweh, the personal name of God in Hebrew, when a biblical text emphasizes Yahweh as a name: “His name is Yahweh” (Ps 68:4). Yahweh is used more often in the Holman CSB than in most Bible translations because the word Lord in English is a title of God and does not accurately convey to modern readers the emphasis on God’s name in the original Hebrew.

The 2003 edition printed the name Yahweh 78 times in 72 verses. It was very selective, as the Divine Name appears over 6000 times in the Old Testament. In the 2009 update, the name Yahweh appears 656 times in 610 verses, a significant improvement although still only about 10% of the actual occurrences.

Then they took a giant step backwards.

Describing the re-published CSB, the CSBible.org FAQ has this statement:

The CSB Translation Oversight Committee chose to come into alignment with other English translations, departing from the HCSB practice of utilizing “Yahweh” in the text. The HCSB was inconsistent, rendering YHWH as “Yahweh” in only 656 of 6,000+ occurrences of YHWH, because full consistency would be overwhelming to the reader. Yet feedback from readers also showed that the unfamiliarity of “Yahweh” was an obstacle to reading the HCSB.

The CSB replaces the name Yahweh where used in the HCSB with the conventional LORD.

Sometimes (often?) Messianic and Hebrew Roots believers use terms that might not be all that familiar to others. Sometimes we use them in different ways than they are used in Scripture. One example is the Hebrew word shofar. We like to sound the shofar, a natural instrument made from a variety of animal horns – ram, sheep, or kudu, but never a cow.

In Scripture, the Hebrew word shofar (Strong’s #H7782) always refers to a ram’s horn. It occurs 72 times in the Hebrew Tanakh (Old Testament). It never appears in the New Testament, which is preserved for us in Greek.

The term Messiah is used 58 times in the Gospels and Acts as a translation of the Greek Christos (#G5547) otherwise translated as Christ. There are about 550 occurrences of Christos, so the decision to use the word Messiah about 10% of the time is based on context and ease of reading (for most Christians).

The word Messiah is not used in the Old Testament. In the HCSB it was only used in Daniel 9 in the prophecy of the seventy weeks. The CSB uses the traditional “Anointed One” here.

These are just word choices, but I think they do make the CSB a little better for Messianic believers.

Should You Get the CSB Holy Land Illustrated Bible?

Having several translations for comparison during study is good. If you don’t already have the Christian Standard Bible and you like reading about the land of Israel, the CSB Holy Land Illustrated Bible might be a good choice. If you just want the CSB for quick reference without all of the articles, inexpensive text editions are available. Personally, I like the older Holman Christian Standard Bible from 2009 a little better. If you can find that, snatch it up! Or you can download it for your Kindle (currently it is offered for free!).