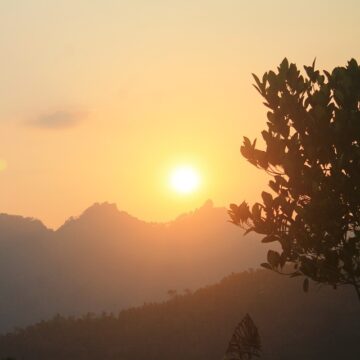 “Great is Your faithfulness.”  Simply marked as “Upon Rising” in the weekday siddur, this prayer is intended to be said while still in bed and before one’s feet hit the floor:

I gratefully thank you, O living and eternal King, for You have returned my soul within me with compassion –
Great is Your faithfulness!

Such a prayer indeed seems appropriate in the morning, and brings to mind the words of Jeremiah. He wrote the poetic book we call Lamentations at a time when it seemed everything he had known was destroyed.  In fulfillment of prophecy that he himself gave, Jerusalem now lay in ruins.  The Babylonians had taken away the people of the city and the treasures of the Temple, and then burned everything.  As the smoke rose over the remains of the Holy City, Jeremiah wrote:

The LORD’S lovingkindnesses indeed never cease,
For His compassions never fail.
They are new every morning;
Great is Your faithfulness.
(Lamentations 3:22-23)

The English Standard Version puts it this way:

The steadfast love of the LORD never ceases;
His mercies never come to an end;
They are new every morning;
Great is your faithfulness.
(Lamentations 3:22-23 ESV)

Verse 22 begins with the Hebrew phrase chasdey Adonai ki lo tamenu. You may recognize the first word  as a form of chesed, a beautiful Hebrew word expressing lovingkindness and mercy – and much more.  If you have a chance, research this word keyed as Strong’s number H2617.  The last word, taman (H8552) means to be completed, finished, or at an end.  The word lo preceding it is a negation, which changes the meaning to not completed, not finished or not at an end.

This phrase, then, is translated in the two versions I have shown above (NASB and ESV) as saying “the lovingkindness (mercy) of the LORD is not ending.” Other older translations like the KJV and Bishop’s Bible translate it as “because of the lovingkindness (mercy) of the LORD, we are not ending (consumed).”  Perhaps the Hebrew structure is ambiguous enough that both are correct.  In fact, the Greek in the Septuagint may be as well.  Brenton has both, and renders the whole of verse 22 this way:

The two Hebrew words in the phrase rabbah emunatecha “great is your faithfulness” are rab (Strong’s #H7227), an adjective meaning much, many or great, and emuna (Strong’s #H530), a noun most often translated as faithfulness. The first occurrence of the Hebrew word emunah is found in Exodus 17:12 in the story of the battle against Amalek.  As long as Moses held up the “staff of God” in his hand, Israel prevailed.  But if he lowered it, Amalek prevailed.  Joshua and Hur came alongside him to support his tired arms, and Scripture reports, “Thus his hands were steady (emunah) until the sun set.”  To be faithful is to remain steady, unwavering, always true and dependable.

Preparing the children of Israel to enter the Promised Land, Moses reminded them of the faithfulness of God.

Know therefore that the LORD your God, He is God, the faithful God, who keeps His covenant and His lovingkindness to a thousandth generation with those who love Him and keep His commandments (Deuteronomy 7:9).

Years later, Miriam (Mary) the mother of Yeshua would know the faithfulness of our covenant-keeping God. After the angel Gabriel told her she, would bring the Messiah into this world, she visited the mother of John, the one who would be his forerunner.  Filled with praise, she proclaimed,

For the Mighty One has done great things for me; and holy is His name.
And His mercy is upon generation after generation toward those who fear Him.
(Luke 1:49-50)

Truly, “God is faithful, through whom you were called into the fellowship of His Son, Yeshua the Messiah our Lord (1 Corinthians 1:9 TLV).

Lamentations 3:23 is the only place in Scripture where the phrase rabbah emunatechah “great is your faithfulness” appears, and is no doubt the source of this morning prayer upon rising. After a good night’s sleep – something often used as an idiom for death – one is awakened as if God has “returned my soul within me with compassion.”  We can be confident that His compassions, His mercies, never fail; they are new every morning.

Your lovingkindness, O LORD, extends to the heavens,
Your faithfulness reaches to the skies.
(Psalm 36:5)