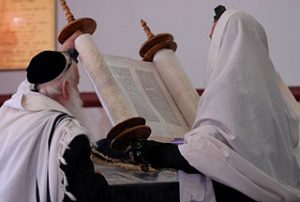 Beginning this week with Torah portion Mattot there is a change in the Haftarah readings. The Haftarah is a selection from the Prophets that generally corresponds to at least one of the main subjects of the Torah portion.

In a full Torah service, seven members of the congregation are called up for Aliyah to read a selection from the Torah portion. An eighth person, the Maftir or concluder, finishes the Torah reading and also reads the Haftarah selection. In Messianic congregations, this is generally followed by a corresponding reading from the Brit Chadasha (the New Testament.)

How the practice of reading the Haftarah began is uncertain, and several explanations can be found. Even the meaning of the name Haftarah is debated. Most commonly suggested is that the word derives from an Aramaic word meaning “conclusion,” signifying that this concludes the reading of Scripture in public services. Though similar in sound, it has no relationship to the Hebrew word Torah.

Reading the Haftarah may have originated during the Maccabean era when Jews were forbidden from reading the Torah. Taking a similar passage from the Prophets, they could use it to refer back to the Torah which they were unable to read.

One could read, for example, from the prophet Isaiah:

Who created the heavens and stretched them out,
Who spread out the earth and what it brings forth,
Who gave breath to the people upon it,
And life to those who walk thereon;
(Isaiah 42:5, JPS Tanach).

Then the reader could say, “This reminds me of the creation story,” and begin a midrash or even quote from memory Torah Portion Bereshit, Genesis 1. One could read the Song of Deborah in Judges 5 and then expound about the Song of Moses in Exodus 15, or read the story of the two spies in Joshua 2 and relate it to the activities of the 12 spies in Numbers 13.

The Haftarah passage from the Prophets has apparently changed over time. Many Biblical scholars believe Yeshua was reading from the Haftarah in the Synagogue as recorded in Luke 4:

And He came to Nazareth, where He had been brought up; and as was His custom, He entered the synagogue on the Sabbath, and stood up to read. And the book of the prophet Isaiah was handed to Him. And He opened the book and found the place where it was written,

“THE SPIRIT OF THE LORD IS UPON ME,
BECAUSE HE ANOINTED ME TO PREACH THE GOSPEL TO THE POOR.
HE HAS SENT ME TO PROCLAIM RELEASE TO THE CAPTIVES,
AND RECOVERY OF SIGHT TO THE BLIND,
TO SET FREE THOSE WHO ARE OPPRESSED,
TO PROCLAIM THE FAVORABLE YEAR OF THE LORD.”

And He closed the book, gave it back to the attendant and sat down; and the eyes of all in the synagogue were fixed on Him. And He began to say to them, “Today this Scripture has been fulfilled in your hearing.”
(Luke 4:16-21 NASB)

If Yeshua was reading from the Haftarah in Isaiah 61 back then, that particular portion is now no longer included. We may only speculate as to why.

Here are the haftarah readings for the next three Torah portions:

In regular 12-month years, Mattot and Massei are combined as a “double portion” and read together. In 13-month leap years, they may or may not be combined depending on how Feast days fall. On the Hebrew calendar, these three portions will be read in the weeks immediately preceding the 9th of Av, the day marking the fall of Jerusalem and the destruction of both the first and second Temples. These are known as the Haftarot of Destruction and are prophecies God’s judgment against the Holy Land.

This year, the passage from Isaiah 1 will actually be read on the 9th of Av. Because it is the weekly Sabbath, the traditional observance including mourning and fasting is deferred until the next day.

On the Sabbaths following the 9th of Av, the first Haftarah reading is from Isaiah 40, beginning with “Comfort, comfort My people, says your God” (Isaiah 40:1 NASB). This Haftarah of Consolation begins a series of seven Haftarah portions progressing through the last part of the book of Isaiah and ending on Shabbat Shuvah, the Sabbath between Yom Teruah (Rosh Hashanah) and Yom Kippur.

Keeping the calendar in mind and understanding why these Scripture passages were selected enhances the focus on God’s redemptive plan. As you read them, pray for the peace of Jerusalem and for the restoration of all Israel. May Messiah Yeshua come to us quickly and in our time.

For a listing of Torah, Haftarah and Brit Chadasha readings, visit messianictorahportion.com.