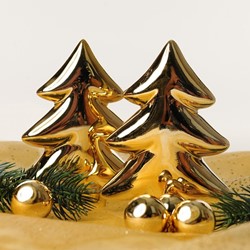 Jeremiah prophesied between 626 BCE and sometime after the second deportation to Babylon in 586 BCE. He spoke about God’s impending judgment on Judah and one of the primary causes, idolatry. He also spoke of restoration and of the New Covenant. Though the book of Jeremiah is not in chronological order, Jeremiah began prophesying during the reign of King Josiah, grandson of King Manasseh. It was Manasseh’s idolatry that was the final straw for the Jewish nation.

Within the prophesies of Jeremiah is a warning that appears to describe a common item of our modern time:

Thus saith the LORD, Learn not the way of the heathen, and be not dismayed at the signs of heaven; for the heathen are dismayed at them. For the customs of the people are vain: for one cutteth a tree out of the forest, the work of the hands of the workman, with the axe. They deck it with silver and with gold; they fasten it with nails and with hammers, that it move not.
(Jeremiah 10:2-4 KJV)

The prophet is describing a Christmas tree, right? It’s an evergreen from the forest, cut down and decked out with silver and gold decorations (can you hear Burl Ives singing?) and placed on a stand so that it doesn’t fall over. It seems pretty clear and straightforward.

Of course, all we’ve read here is three verses from the King James Version, without context. But we Torah-obedient followers of Yeshua don’t really like the idea of Christmas, so this makes sense. And we do know that Christmas trees are pagan, don’t we?

What Is a Tree?

The Hebrew word translated as “tree” is עץ ‛ets, Strong’s Hebrew word #H6086. It is first used in the creation account in the opening chapter of Genesis.

The same word appears in Genesis 22 in the account of the binding of Isaac.

So Abraham rose early in the morning and saddled his donkey, and took two of his young men with him and Isaac his son; and he split wood for the burnt offering, and arose and went to the place of which God had told him. (Genesis 22:3)

Then they came to the place of which God had told him; and Abraham built the altar there and arranged the wood, and bound his son Isaac and laid him on the altar, on top of the wood. (Genesis 22:9)

This is how the passage from Jeremiah 10 appears in the New American Standard Bible:

Thus says the LORD,
“Do not learn the way of the nations,
And do not be terrified by the signs of the heavens
Although the nations are terrified by them;
For the customs of the peoples are delusion;
Because it is wood cut from the forest,
The work of the hands of a craftsman with a cutting tool.
They decorate it with silver and with gold;
They fasten it with nails and with hammers
So that it will not totter.”
(Jeremiah 10:2-4)

Is the prophet describing the forerunner of a Christmas tree or is it something else? By using the word “wood” instead of “tree” and looking at these verses in context, it becomes clear that this passage is talking about an idol, a piece of carved wood clad in silver and gold. Consider the rest of the passage.

“Like a scarecrow in a cucumber field are they,
And they cannot speak;
They must be carried,
Because they cannot walk!
Do not fear them,
For they can do no harm,
Nor can they do any good.”
There is none like You, O LORD;
You are great, and great is Your name in might.
Who would not fear You, O King of the nations?
Indeed it is Your due!
For among all the wise men of the nations
And in all their kingdoms,
There is none like You.
But they are altogether stupid and foolish
In their discipline of delusion–their idol is wood!
Beaten silver is brought from Tarshish,
And gold from Uphaz,
The work of a craftsman and of the hands of a goldsmith;
Violet and purple are their clothing;
They are all the work of skilled men.
(Jeremiah 10:5-9)

For further confirmation, compare this to a similar passage in Isaiah:

Another shapes wood, he extends a measuring line; he outlines it with red chalk. He works it with planes and outlines it with a compass, and makes it like the form of a man, like the beauty of man, so that it may sit in a house. Surely he cuts cedars for himself, and takes a cypress or an oak and raises it for himself among the trees of the forest. He plants a fir, and the rain makes it grow. Then it becomes something for a man to burn, so he takes one of them and warms himself; he also makes a fire to bake bread. He also makes a god and worships it; he makes it a graven image and falls down before it. Half of it he burns in the fire; over this half he eats meat as he roasts a roast and is satisfied. He also warms himself and says, “Aha! I am warm, I have seen the fire.” But the rest of it he makes into a god, his graven image. He falls down before it and worships; he also prays to it and says, “Deliver me, for you are my god.”
(Isaiah 44:13-17)

So What About Christmas Trees?

The modern Christmas tree appears to have originated in Germany around the time of the Protestant Reformation, an adaptation of a similar previous custom. Since then, both Christian and secular tales about the meaning of the Christmas tree have flourished, all from a reflective view. The “meanings” were created later as an explanation for something that already existed.

Before being a part of the Christian tradition, it is generally undisputed that decorating evergreen trees around the time of the winter solstice was a part of pagan celebrations, at least in the known world of Europe and the Middle East in the northern hemisphere. However, in our modern time we’ve also fabricated stories about those pagan “origins” that simply have no basis in fact. For example, there is no evidence of anything called a “Saturnalia Tree” and no association with Nimrod, grandson of Noah. In fact, the mythological stories surrounding the actual Nimrod are just that – mythology, and not historical reality.

Too many of the stories told have no foundation in truth. Books like Alexander Hislop’s The Two Babylons were debunked years ago, but they keep coming back to life among those of us shocked to hear about the pagan practices that have made their way into the Christian church. We grab hold of things that reinforce our new findings without checking them out to see if they are really true.

I don’t have a Christmas tree. If you do, I would ask you to consider what it or any other associated custom has to do with the birth of Jesus, if in fact that is what you claim to be celebrating. Search the Scriptures. You will not find anything that supports Christianizing or otherwise redeeming things that are pagan. Rather, you find instructions to destroy them (Exodus 34:13, Deuteronomy 12:3).

Jeremiah isn’t describing a Christmas tree; he is pretty clearly talking about an idol. Context bears that out, as do similar Scripture passages. In a broader sense though, the prophet echoes the command of Torah not to learn and follow the way of the nations (Leviticus 18:3; 20:23; Deuteronomy 12:30-31), especially when it comes to worshiping our Creator. That means recognizing and un-learning these customs, particularly those of pagan origin, as we seek to learn and follow the ways of Yahweh.