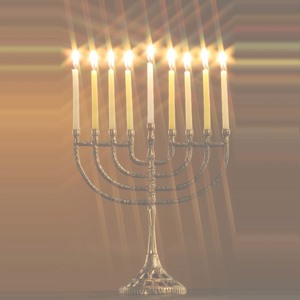 Hanukkah isn’t one of the Appointed Times, or moedim, described in the Torah. In fact, Hanukkah didn’t come about until the Hasmonean period, long after the Babylonian captivity in Jewish history. There is no mention if it in the Tanakh (the Hebrew Bible, the Christian Old Testament), but there are detailed accounts of both the celebration and the events leading up to it in the Apocrypha in 1 & 2 Maccabees.

But I’m Not Jewish

You may be wondering why someone who isn’t Jewish would celebrate Hanukkah. True, 2 Maccabees 10:8 does say that “the whole Jewish nation should celebrate these days every year.” (NAB). The account in 1 Maccabees extends this a little further:

Then Judas and his brothers and the entire congregation of Israel decreed that the days of the dedication of the altar should be observed with joy and gladness on the anniversary every year for eight days, from the twenty-fifth day of the month Chislev.
(1 Maccabees 4:59 NAB)

The “entire congregation of Israel,” though here referring to the people assembled with Judah (Judas) Maccabeus, is really much more than just “the whole Jewish nation.” If you are not sure how you fit into that, check out my post on The Blindness Of Jacob.

Hanukkah is mentioned in the New Testament, in the book of John – though it might not be immediately recognized. The Hebrew word חנכת chanukkah means “dedication,” and the “Feast of Dedication” in our English Bibles is Hanukkah.

At that time the Feast of Dedication took place at Jerusalem; it was winter, and Jesus was walking in the temple, in the colonnade of Solomon.
(John 10:22-23 ESV)

Then came Hanukkah; it was winter in Jerusalem. Yeshua was walking in the Temple around Solomon’s Colonnade.
(John 10:22-23 TLV)

The first four chapters of 1 Maccabees recount the story of Greek oppression of the Jewish people under Antiochus Epiphanes IV, and the rebellion led by Mattathias and his sons. After Mattathias’ death, his son Judah continued the revolt and eventually crushed their enemies. Turning their attention to the defiled Temple and altar, Judah Maccabeus and his men repaired the sanctuary and the interior of the Temple and purified the courts. Then on the twenty-fifth day of Kislev, they offered sacrifices on the newly dedicated altar.

Now Maccabeus and his followers, the Lord leading them on, recovered the temple and the city; and they tore down the altars that had been built in the public square by the foreigners and also destroyed the sacred precincts. They purified the sanctuary and made another altar of sacrifice; then, striking fire out of flint, they offered sacrifices, after a lapse of two years, and they burned incense and lighted lamps and set out the bread of the Presence. And when they had done this, they fell prostrate and prayed earnestly the Lord that they might never again fall into such misfortunes, but that, if they should ever sin, they might be disciplined by him with forbearance and not be handed over to blasphemous and barbarous nations. It happened that on the same day on which the sanctuary had been profaned by the foreigners, the purification of the sanctuary took place, that is, on the twenty-fifth day of the same month, which was Chislev. And they celebrated it for eight days with rejoicing, in the manner of the Feast of Booths, remembering how not long before, during the Feast of Booths, they had been wandering in the mountains and caves like wild animals.
(2 Maccabees 10:1-6 ESV)

Jewish tradition says that when they searched for oil to light the menorah, they found only enough to burn of one day. It would take eight days to prepare more oil. They lit the menorah anyway, and to their amazement the light burned for eight days until the new oil was ready. Whether or not the legend of the oil is true, it has become a big part of the Hanukkah story and is the basis for also calling this the Festival of Lights.

There is one other highly significant event that likely took place during Hanukkah. We know that Messiah Yeshua was not born on December 25, a date adapted from ancient Roman festivals. The most likely time for his birth is during the festivals of the seventh month, either near the middle of the month during Sukkot or at the beginning of the month at Yom Teruah (Rosh Hashanah). Counting backward forty weeks, the normal gestation period, brings us to the end of the seventh month or beginning of the eighth month, which is the time of Hanukkah.

It is very likely that the visit of the angel Gabriel to the virgin Miriam (Mary) was during Hanukkah. How appropriate it is that the annunciation of the coming of The Light of the World would be during the Festival of Lights. Some have even found fulfillment of this prophecy from Haggai by associating it to the seed of the woman in Genesis 3:15.

Consider from this day onward, from the twenty-fourth day of the ninth month. Since the day that the foundation of the LORD‘s temple was laid, consider: “Is the seed yet in the barn? Indeed, the vine, the fig tree, the pomegranate, and the olive tree have yielded nothing. But from this day on I will bless you.”
(Haggai 2:18-19 ESV)

Hanukkah is an eight-day celebration as described in 1 Maccabees 4:56 & 59.

So they celebrated the dedication of the altar for eight days, and offered whole burnt offerings with gladness; they offered a sacrifice of deliverance and praise.
(1 Maccabees 4:56 ESV)

Though we might associate the eight days with the legend of the oil, it is more probable that the legend of the oil derived from an already eight-day long celebration. The first chapter of 2 Maccabees makes a couple of references that indicate the original celebration was actually a postponed observance of Sukkot, the Feast of Tabernacles or Feast of Booths. The delay would have been due to the condition of the Temple and altar in the seventh month when it was normally kept.

The most noticeable element of the Hanukkah celebration is the nine-branched candlestick known as a hanukkiah. There are eight lights representing each of the eight days, with a ninth light (wick or candle) known as the shamash or servant, from which the others are lit. The hanukkiah can take many forms and doesn’t necessarily resemble the seven-branched Temple Menorah. During times of persecution, Jews have been very creative at hiding the hanukkiah in various decorative items.

Candles, they are placed in the hanukkiah from right to left using only as many as are needed for that night. They are lit in the opposite direction from how they are placed – left to right, so that the newest candle is always lit first. The shamash is lit first, and then it is used to light all the other candles. For example, on night three one would put in three candles starting from the right, light the shamash candle and then use it to light the third candle, then the second candle, and finally the first candle. The shamash is then placed back in its original position, usually elevated in the middle or at the left end, and all candles are allowed to burn out.

During Hanukkah children play a gambling game with a four-sided spinning top called a dreidle. A Hebrew letter is written on each of the four sides, and when the top stops spinning and falls over, the letter on the top determines if the player will contribute to the pot, take the pot, take half the pot or simply pass. It seems like an unusual and greedy game for children to play, but like the hidden hanukkiah this game has its roots in times of persecution. The letters on the dreidle are an acronym for “a great miracle happened there,” and the game became a way for families to tell the story of Hanukkah under the cover of gambling should soldiers find them.

It has been said that the two major post-Torah holidays, Hanukkah and Purim, can be summed up in three short lines:

They tried to kill us.
God saved us.
Let’s eat.

In addition to candle lighting, story telling, games and gift giving, it is traditional to eat fried foods like latkes (potato pancakes) and jelly doughnuts called sufganiyot to celebrate the legend of the oil.

If you are doing this for the first time, here is a “kit” to help you get started. This link takes you to Amazon, and the kit includes a hanukkiah with all the candles you will need plus some dreidels (that’s technically not the correct plural form) and a sack of “gelt” – coins for the dreidel game, and they’re chocolate (what could be better!).

Hanukkah for Believers in Yeshua

As believers in Messiah Yeshua, we remember the example of our Master:

For even the Son of Man came not to be served but to serve, and to give His life as a ransom for many.
(Mark 10:45 ESV)

Hanukkah is an annual memorial of the cleansing of the Temple and rededication of the altar. It is a reminder to us to cleanse our temples and rededicate our lives to following Yeshua.

If we confess our sins, he is faithful and just to forgive us our sins and to cleanse us from all unrighteousness.
(1 John 1:9 ESV)

These are taken from the Prayer Book and Life Cycle Guide for Messianic Believers in Yeshua.

Blessing for Lighting the Hanukkiah:

Blessed are you, Oh Lord our God, king of the universe
Who has justified us through faith in Yeshua
The Messiah, the light of the world, and in his name
We kindle the lights of Hanukkah

Directions
Beat the eggs and add the potatoes, onion, salt, pepper and meal. Heat the oil in a frying pan and drop the potato mixture into it by the tablespoon. Fry until browned on both sides. Add more oil as required. Serve with applesauce or sour cream.

Beat eggs, add sugar and beat again. Add milk and beat again. Combine flour, baking powder, and salt in a bowl and add it to the egg mixture. Add vanilla and mix until well blended. Drop by rounded tablespoons into deep fryer, fry until golden brown all around, turning once. Remove and cool.

Make a small hole all the way to the center and fill the doughnuts with a small amount of jelly using a piping syringe or bag. Stop when you can see the jelly, and don’t overfill. Finish by coating with powdered sugar.

The Hebrew words נס גדול היה שם nes gadol hayah sham mean “a great miracle happened there.” The first letter of each word appears on one of the four sides of the dreidel.