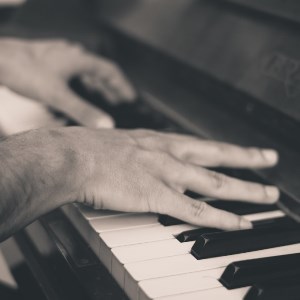 I’ve been blessed by Steve McConnell’s music since I first began this walk. At the time, my wife and I owned a local, independent Christian bookstore. We had a good selection of music, and the major distributors like Chordant and Word kept us up-to-date and well supplied with demos and new releases. But about the only Messianic Jewish music from these mainstream sources consisted of some great worship sets by Paul Wilbur and a couple of collections from Galilee of the Nations.

When we attended a nearby congregation on Sabbath I got my first exposure to Davidic dance.  One of the songs they incorporated was called “Chai Hashem.” It stuck in my head, and when we got back home I looked it up and found Steve McConnell’s CDs “We Delight” and “Sim Shalom” listed in a catalog (I don’t remember which one) and ordered them. I was hooked. Even though I could not find a wholesale source for them, I played them in the store from time to time. But my customers weren’t really interested in them, or in any of the other Messianic items I was now carrying for that matter. We sold the business a short time later.

Since then I’ve picked up the rest of Steve McConnell’s Messianic CDs. The last of these was released in 2004 with nothing new since. I respect his privacy and there is no bio information in this post, just a review of the music. I have been assured “Steve is alive and well,” and that “he is leaving the writing and recording to the next generation for now.” Certainly the next generation has stepped up to the plate and there is a lot of fine, well-produced Messianic worship music available today, but I’d love to hear new Steve McConnell music. I hope he decides to give it one more go.

All of these songs feature Steve McConnell on acoustic piano. Sometimes it is a bass line with staccato triad chords on the backbeat, like those found in traditional Jewish tunes. Others are softer ballads or jazz piano tunes, similar to the style of Billy Joel or David Foster. His comfort and mastery of the piano, though a different genre, brings to mind one of my favorite Christian musicians, the late Keith Green. A slide trombone and maybe some other brass, with a flute, clarinet and other woodwind instruments I may not individually recognize play both jazz and middle-eastern style accompaniment and melodies. Beautiful strings and percussion round out the mix.

What I don’t hear are electric guitars, or any distortion or other dominant electronic effects. This is just beautiful acoustic music. Don’t get me wrong here, I personally love a driving rock beat. Psalm 7 is described as “A shaggion of David,” defined in one of my study Bibles as a “wild, passionate song, with rapid changes of rhythm” and in another one as “dithyrambic.” Plus I think the beginning of Psalm 84, “on the gittith,” is really an ancient Hebrew code word that signifies (in some prophetic manner) screaming electric guitars. But you don’t find that with these songs. It isn’t needed.

All songs are marked as copyright Steve and Sue McConnell, and only “Yom Shekulo Shabbat” is listed as a different composer. I guess what that tells you is this whole collection is the heart of a man and his wife worshipping their creator, pure and simple. It’s hard to track anything else down. The CDs are not on a formal recording label. The web site mentioned on the CD liners is no longer registered, and another web site associated with McConnell’s music is not currently live.

Singing is one of the easiest ways to memorize passages of Scripture. This is even more the case when learning Scripture in Hebrew. I don’t know a lot of Hebrew, but I do like to follow along in a Hebrew Bible. Sometimes that means jumping back and forth with repeated words or skipping over part of a verse, but it really does make the song more meaningful.

So here are a few of my favorite songs from these four albums.

Ki T’hilati Attah
From the album We Delight

This song is entirely in Hebrew from portions of Jeremiah 17:12-14. The title and the repeated refrain are from the last part of verse 14, most often translated as “You are my praise.” The refrain is sung with beautiful harmonies – it’s just a guess, but they may all be McConnell. A distinctive triangle chimes throughout the song. The English translation that follows, though not sung, is from the liner notes.

Translation:
A glorious throne
Exalted from the beginning
Is the place of our sanctuary
You are the one I praise

Heal me. O LORD, and I will be healed
You are the one I praise

Save me, O LORD, and I will be saved
You are the one I praise

Vayikra Shemo
From the album We Delight

Here is the familiar passage from Isaiah 9:5 (verses 6 in most English Bibles) again all in Hebrew, along with portions of Isaiah 53 and the added line “He is Messiah, our Salvation, King of Israel.” The chorus is easy to remember, so as I stated before this is a good way to memorize Scripture in Hebrew. It crescendos with the help of a subtly moving cello to a majestic cymbal crash, again with great harmonies (Steve himself?).

This CD is so good, I have to mention two more that have helped me memorize notable passages of Scripture.

Nachamu Ami from the beginning of the second half of Isaiah:

And Adonai Yimloch from the Song of Moses, the same place we get the Mi Kamocha:

Adonai Yimloch L’olam Vaed
The LORD shall reign forever and ever
(Exodus 15:18)

Here is the full track listing from We Delight, released in 1996:

This is a beautiful love song from Hosea 2:21-22 (verses 19-20 in most English Bibles). It’s another one that is all in Hebrew, God’s expression of love to His bride. Out of everything on these albums, this is one of two that I must call my favorite. Violin and flute along with the piano and soothing vocals bring the listener into the intimate presence of The Almighty.

The songs on HaMoedim celebrate the Feasts of Adonai listed in Leviticus 23, with the last two quite appropriate for Hanukkah and Purim. Here is the full track listing from HaMoedim, released in 1998:

There is a “hidden” song at the end of the last track on the “HaMoedim” album. Perhaps you have encountered these before. If you just let it play after the end of the final song, “L’ahava,” the song “First Fruits” will fade back in, but this time with some scat going on through the chorus. It’s a fun ending to a collection of songs about rejoicing in the feasts of the Lord.

It was the first Steve McConnell song I heard (OK, it was either this one or We Delight, I’m not totally sure) and it is the other one I would call my favorite. The lyrics to the chorus are from Psalm 18:46 and Psalm 34:2, so once again it helps me to learn these portions of Scripture in Hebrew. I love it when I hear these Hebrew phrases in other songs, as I recognize them and know where they come from. The three verses to the song each have four lines that begin with the phrase “The LORD lives – Chai HaShem.” It’s fun to sing and it’s a mighty declaration.

Shabbat Menucha is a traditional Jewish song welcoming in the Sabbath. It is part of the Shabbat zemirot, or table hymns sung following the Sabbath evening meal. The chorus of Steve McConnell’s version follows a different melody using the familiar lyrics. The verses included the Beatitudes, the blessings promised to the faithful from Yeshua’s Sermon on the Mount. The song celebrates the gift of God’s Sabbath, with a delightful instrumental bridge featuring slide trombone and saxophone.

Let this day be a sanctuary
(O Lord we love your sanctuary!)
A sanctuary in time
(We love this day you’ve given us!)
This day proclaims God is true to his name
It’s a taste of his finest wine

Translation:
This day is to Israel
Light and gladness, a Sabbath of rest

Here is the full track listing for Sim Shalom, released in 2002:

Here is a simple but catchy tune that is hard to stop singing. The piano accompaniment is an alternating and walking bass on the left hand with backbeat triad chords on the right hand. Middle-eastern flavor reeds (soprano sax) and a chorus of voices fill in the background in one of the few songs that just fade out, leaving everything playing in your head long after it has ended. Another great way to learn Hebrew scripture. Psalm 113:2-3 is sung first in Hebrew and then in English, ending with “Yeshua, Halleluyah.” What better way to follow the line, “we will praise the name of the Lord.”

A slow, majestic intro quotes Revelation 5:13 in Hebrew (looks to me like it is from the Hebrew New Testament by Franz Delitzsch), then an upbeat musical recitation describes the whole scene from Revelation 5:9-14 using the words of Scripture in English. Another one that is hard to stop singing.

(Translation:
Blessing and honor and glory and power
Forever be to him who sits on the throne and unto the lamb)

Here is the complete track listing for Yeshua, released in 2004:

They are incredibly uplifting, I think because they are primarily Scripture. His piano style is sometimes exuberant, sometimes mellow, and always heartfelt. The music just makes the lyrics so memorable – which was probably his intent. Worship the Father by singing back to Him the words of Scripture.

McConnell put out one more album titled Familiar. I don’t want to call it secular, because listening to it you can sense his faith in action. But it is more mainstream. One of the songs, One Thing Right, is from the previous Sim Shalom album. Have I Made An Impact and Saddest Story are thought provoking questions and answers to the choices we make in life. And there is a very moving song Manhattan Diary that that chronicles the days before and after September 11, 2001. The “verse” for the day of 9/11 is simply McConnell playing his piano.

You might be able to find copies of these CDs, but they are certainly not readily available. I recently saw Yeshua listed on eBay for a ridiculously high price. But you can stream them all at Amazon, or purchase them as mp3 downloads either individually or as complete albums. I would recommend you do, as there might come a time when they are no longer available. And I don’t plan to part with mine.