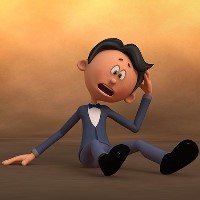 King David wrote those words during one of the many troubled times in his life.  His own son, Absalom, was in hot pursuit.  In the lines leading up to this verse, David complains about how they are all out to get him, and how they are all saying that God won’t save him.  I guess that just goes to show what “they” know.

Elijah is perhaps the most esteemed of the Old Testament prophets. Surprisingly, not much is written about his life. We are introduced to him for the first time seemingly out of nowhere in 1 Kings 17. He is the main character for the next three chapters, at which point he is told to anoint his successor, Elisha. A short time later, in 2 Kings 2, he takes his famous ride in the chariot of fire and he’s gone.

He is most well-known for his showdown with the prophets of Baal on Mount Carmel. Elijah is the instrument of an amazing display of the power of God in front of a huge crowd. And then, just like that, he goes from high to low. On the run, hiding in a cave, God finds him and asks, “What are you doing here, Elijah?” (1 Kings 19:9). I think God may have asked him that rather firmly, as a parent might ask a child caught in the act of doing something they shouldn’t.

Standing on a mountain, Elijah experienced a tornado, an earthquake and a fire. Those are the terrifying things for which I carry insurance on my home; they are the disasters that can not only destroy all of our material possessions but leave us physically injured as well. Then when all of that trouble has passed, God again asked him the same question – but this time in a soft, gentle breeze. The traditional familiar phrasing of the King James Version is “a still small voice.” “What are you doing here, Elijah?” (1 Kings 19:13).

Elijah went through that low time of depression, feeling completely alone and abandoned (although God said he still had 7,000 compatriots with him), but he came out on the other side restored and ready to go.

Peter first encountered Yeshua while fishing on the Sea of Galilee. After not just witnessing but being in the middle of a miracle, Peter succumbed to his feelings of inadequacy and told Yeshua to go away (Luke 5:8). But Yeshua told him not to be afraid and to follow him, which the vulnerable Peter did.

Being a life-long fisherman, Peter was pretty familiar with the water. But at one point, he saw something he had never seen in his life. He’s out on the sea and Yeshua is coming toward him, calmly walking on the top of the rough water. Peter had the chance to do something cool and exciting and stepped out on the water walking toward Yeshua. You know the story. Fear got the best of him and he started sinking, only to be rescued by the one he had previously told to go away.

Later Peter went up on a mountain with Yeshua and a couple of other guys and was brought into a spectacular vision with Yeshua, the great deliverer Moses and that famed prophet Elijah who had previously conquered his bout with depression.  At the end of this totally awesome experience, “He didn’t know what to say, for they were terrified” (Mark 9:6 TLV), so he opened his mouth and stuck his foot right in it, saying something dumb.

That came only a short time after Peter had made the profound declaration, “You are the Messiah!” (Mark 8:29 TLV). Maybe he was really feeling good about how that was received, but in his zeal he challenged Yeshua and then Yeshua referred to him as his adversary, maybe even as Satan himself. Talk about up and down, up and down. Peter was on a roller coaster.

Later, Peter found himself in the garden with Yeshua and those same guys he was with on the mountain. But he couldn’t even stay awake. When the mob showed up he was ready to fight, wielding his sword and slicing off a man’s ear – only to have Yeshua tell him to chill, then heal the injured enemy. Maybe he felt a little humiliated, maybe even offended or scorned. Maybe that was part of the reason he denied knowing Yeshua. Then when it hit him just how bad he had messed up, the Bible says he “wept bitterly” (Matthew 26:75, Luke 19:41).

Peter was a complete failure, at least in his own eyes, and probably in the eyes of others. But Yeshua knew the potential he had and told him, “I have prayed for you, that your faith should not fail; and when you have returned to Me, strengthen your brethren” (Luke 22:32).

You know this story, too. Peter went on to be one of the founding pillars of the post-resurrection Messianic assembly, leading the meeting in the upper room and delivering his powerful message at the feast of Shavuot (Pentecost).

Still, it wasn’t all roses for Peter. Paul describes a conflict with Peter in chapter 2 of his letter to the Galatians. But I think this reveals a different problem Peter had to cope with. We only have Paul’s side of the story in the Galatian letter, not Peter’s. And there is no other direct account anywhere of what happened, though there are hints in the writings of Clement. Personally, I think Paul’s perception might not have been completely accurate.

“But when Cephas (Peter) came to Antioch, I opposed him to his face, because he stood condemned. For prior to the coming of certain men from James, he used to eat with the Gentiles; but when they came, he began to withdraw and hold himself aloof, fearing the party of the circumcision” (Galatians 2:11-12).

I doubt Peter, who had received specific revelation regarding Gentiles from God himself, really behaved the way Paul evidently thought he did. But I also wonder if some of those watching might have remembered how Peter was in the past. Did they recall how he said things without thinking? How he sometimes acted impulsively? How he frequently said one thing and did another? Did Peter now have to deal with people believing his past was also his future, assuming he would always be a failure, and thinking “here we go again?”

Peter isn’t mentioned in New Testament history after the 15th chapter of Acts. The writer of that account, Luke, travelled with Paul and wrote about him instead. Tradition tells us Peter continued in ministry and was martyred in Rome under the emperor Nero. It seems he finally overcame the stigma of his earlier downfalls.

The prophet Jonah gives us another example, this time of someone who blatantly goes away from God and the things he has been called to do. You’ve read it. To save others (not himself), Jonah is thrown into the sea, “rescued” if that’s what you want to call it by God, and repents. Repentance means to turn from the way you were going and go in the opposite direction, in the right way.

In the depths of the sea he offered a very short prayer recorded in chapter 2 of Jonah. Then he isn’t heard from for three days. In that prayer, Jonah reveals a beautiful understanding of where we often go astray, sometimes wondering what happened.

So here I’ll even disclose my own disappointment in what I read. The New International Version (NIV) is a dynamic equivalent translation of the Bible. It isn’t a literal, word-for-word translation of Hebrew, so don’t expect it to be. It is meant to covey the thought of the original text in a way we can understand it today. The New American Standard Bible (NASB), a much more literal translation, renders Jonah 2:8 this way:

“Those who regard vain idols forsake their faithfulness” (Jonah 2:8).

OK, I get it.  But the dynamic equivalent NIV brings out the meaning much more poetically, creating a moving word picture. I love the way it says this:

“Those who cling to worthless idols forfeit the grace that could be theirs” (Jonah 2:8 NIV).

Beautiful. At least it was in 1984 when it was written. But someone changed it in 2011 (don’t be alarmed; all Bible translations go through revision – even the KJV). Now it reads:

“Those who cling to worthless idols turn away from God’s love for them” (Jonah 2:8 NIV).

When I first discovered this a while back, I was a little disheartened. It didn’t change what Jonah prayed, or the meaning of the original words in Hebrew, or the faithfulness of the God he was calling upon, or the answer to the prayer. It was just different, uncomfortable, and, well … disappointing. But life is full of disappointments and full of changes, even with things that we don’t think should ever change.  And I still have my old NIV.

After Jonah repented he did what God told him to do, but he wasn’t satisfied with the results. So he sulked. And that’s the abrupt end of the story. We don’t know what happened after that; the Biblical account just leaves him in a bummed-out condition.

Elijah went from high to low, then he got up and continued on.

Peter fell down and got up over and over again, even to the point that people expected him to fall down again. He still encountered resistance, but he persevered.

Jonah ran, repented, did what he was supposed to do. Then he buried himself in self-pity, and we don’t know where he ended up.

Bob Carlisle (composer of the song Butterfly Kisses) once recorded a song about a peasant man questioning a priest about life inside a monastery. The priest gave him a simple answer: we fall down; we get up.

Life can really get us down. Job not going well? Don’t have a job? Drowning in debt? Can’t stay on that budget? Dieting? Made bad relationship choices? Did you open your mouth and insert your foot? In the words of the contemporary Christian band Switchfoot, “Welcome to the planet; Welcome to existence.”

Way back in Genesis the patriarch Jacob blessed his sons. Right in the middle of it all, as he prophesied over them of things to come, telling them of their ups and downs, one line stands out. “For Your salvation (Hebrew: yeshuah) I wait, O LORD” (Genesis 49:18). Years later Yeshua himself said, “The thief comes only to steal and kill and destroy; I came that they may have life, and have it abundantly” (John 10:10).

Jonah’s prayer ended with this:

But I, with shouts of grateful praise, will sacrifice to you.
What I have vowed I will make good.
I will say, Salvation (Hebrew: yeshuah) comes from the Lord.
(Jonah 2:9 NIV)

After running, he repented. After falling, he got back up. After being a complete failure and the cause of others suffering, he determined to go on. And in the Lord God, he found salvation.

“Straighten up and lift up your heads, because your redemption is drawing near” (Luke 21:28).

Everyone’s here
Everybody’s watching you now
Everybody waits for you now
What happens next?

Maybe redemption has stories to tell
Maybe forgiveness is right where you fell
Where can you run to escape from yourself?
Where you gonna go?
Salvation is here