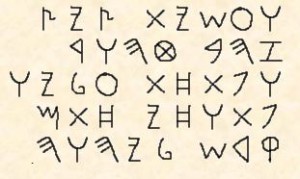 This past Sabbath I was studying with a few friends who are somewhat new to this walk and don’t have a lot of resources. In the course of our discussions, one of them read aloud the rabbinic commentary on Exodus 39:6 from my Stone Edition Chumash:

6. שדקה נזר – The crown of sanctity – This refers to the Head-plate upon which was engraved HOLY TO HASHEM (28:36).

Having never encountered this term before, my friend* asked about HASHEM. I went over the makeup of the term with him in Hebrew, explaining that it is a noun meaning “name” with the definite article attached at the beginning, so it means “the name.” Looking again to the notes at the beginning of the Chumash, we found the section that explained, “In this work, the Four-Letter Name of God is translated ‘HASHEM,’ the pronunciation traditionally used for the Name to avoid pronouncing it unnecessarily.”

Whether or not use of the term is appropriate, that is the explanation as to why my friend encountered it while reading this commentary. Having satisfactorily answered his question, we continued our study of the consecration of the priests and then moved on to the next subject in the Torah portion.

Certainly the pronunciation and use of the Divine Name is one of the two most divisive topics in the Messianic and Hebrew Roots community (the other, of course, being the calendar).

The gold plate on the forehead of the High Priest did not read “Holy to HASHEM.” It also did not say “Holy to the LORD,” nor did it say “Holy to Yahweh” or any other variation of a transliterated pronunciation of the Hebrew letters yod-hey-vav-hey. It was written in ancient Hebrew – not English or even Modern Hebrew – and probably looked something like the last line in the picture at the top of this page. But since we don’t have the original head-piece and none of us were there, we really do not know. Nor do we know exactly how those words would have been pronounced.

It is pretty common in this movement to hear people claim that the name of God has been removed from the Old Testament alone more than 3000 times in English translations. The fact is, in most translations it is very evident everywhere the Divine Name appears in the Hebrew text – it is printed as LORD (or a few times as GOD) in all upper-case letters. In the ancient Scriptures the Divine Name was represented by four Hebrew letters forming a name we do not know how to pronounce, making it difficult if not impossible to know how to correctly write it out in English. You could, perhaps, print the letters YHWH – or is it YHVH, or JHVH? Whatever words or letters are used, the reader is certainly free to pronounce them any way they choose – or to substitute an appropriate title, such as Adonai, Lord, the Almighty or even Hashem.

So what about those titles? I’ve often heard that they are “pagan.” Yet Yahweh (the spelling and pronunciation I prefer to use) is called Adonai many times in Scripture, a Hebrew word properly translated into English as Master or Lord. He is also often called El, Elohim or another variant of that Hebrew word properly translated into English as Mighty One or God. A title itself is not pagan or holy – it is simply a title.

Whether or not it is proper to pronounce the Divine Name or a form of it, or to use one or more of these titles, is a personal matter I will not attempt to address. And we haven’t even mentioned how we should refer to our Messiah! When in a public setting, we need to be respectful of our brothers and sisters around us without violating our own convictions on this subject.

I have at times been called on to lead others in worship, including some who feel strongly about this issue. I usually – but not always – sing songs with the lyrics as they were originally composed, including the names or titles. And I encourage those who are worshiping to sing them using the names or titles, whether Hebrew or English, that they feel are appropriate. This should be a matter between the worshipper and the One being worshiped. Do not be concerned about anyone else listening to you, and do not concern yourself with what someone else is saying or singing.

And please, do not make this a cause for division or refusing fellowship.

*You can read a little about my friends here.