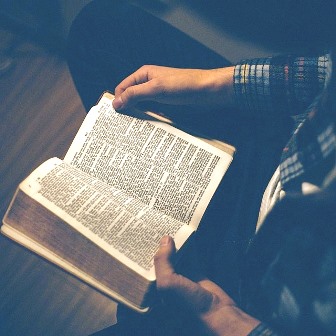 For many years I have made it a practice to read all the way through the Bible every year, even before I started this Torah-obedient walk some twenty years ago. I change translations each year, and have used quite a few different ones – some very good, some not so much. And I’ve done this using a variety of methods, some of which I have written about here.

Following an annual Bible reading plan is not intended for Study. I recommend that for these plans you just read, keeping a notepad handy to jot down things you want to go back and study later. Just reading without interruption helps to keep things in context, and to recognize those passages often quoted out-of-context when they come up.

One problem with these various plans is that they are not at all tied to the Hebrew calendar or the Torah cycle. So after moving to this lifestyle I was following two different reading plans: one beginning in January for my through-the-Bible-in-a-year plan, and one beginning right after Sukkot for the Annual Torah Cycle which includes all five books of the Torah, the selected Haftarah readings from the prophets, and small corresponding passages from the New Testament.

A Plan Based Around Torah Portions

A few years ago one of the men I met with at a nearby prison sent me on a quest to find a certain Bible reading plan he head heard about. I wasn’t familiar with the source, but after searching using his description I was eventually able to find it. The plan he wanted takes the reader through the entire Christian Bible, Old and New Testaments, based on the Hebrew calendar, the Torah cycle, and the Biblical Festivals.

I printed off the schedule and gave a copy to this man, and I also started using it myself. The following year, he and a couple of other inmates used it, and since then they have requested it every year. This will also be the fourth year that I use this plan.

The entire plan takes one Hebrew year, beginning and ending on Simchat Torah, the day after Shemini Atzeret (the Eighth Day Assembly following Sukkot) when traditionally the end of Devirim (Deuteronomy) is read, then the Torah scroll is rolled back and the beginning of B’reshit (Genesis) is read. 5782 was a “leap” year, thirteen lunar months long; 5783 is a regular twelve lunar month year.

The Scripture Reading Plan for 5783 (2022-2023) is published by Bney Yosef North America (BYNA). As mentioned, it follows the annual Torah cycle and expands it to include the complete Old and New Testaments. Each day has four passages to be read, respectively taken from the 54 Torah Portions, the rest of the Old Testament, the New Testament, and Psalms & Proverbs. When the Torah reading is interrupted by special portions for the Appointed Times (Moedim or Biblical Festivals), those special readings are included without skipping the same passages in the regular readings.

In the Hebrew Bible, the 150 Psalms are actually subdivided into five books. Although there is no direct correlation of the content of these Psalms to the five books of Torah, they are often paired. BYNA has coordinated the Psalm readings so that each of the books begins when the Torah cycle begins a new book. The Proverbs are interspersed with the Psalms so that these “books” align.

One minor issue that could be encountered will depend on which Bible translation is used. This plan uses the book order and the chapter and verse designations found in Christian Bibles, which in the Old Testament is sometimes different from the Tanakh (Hebrew Bible). Readers using Messianic translations such as the Tree of Life Version or the Complete Jewish Bible may find some of the references off by a few verses.

This covers all 66 books of the Old and New Testaments in the Christian Bible. So, it does not take in any books of the Apocrypha, such as the books of Maccabees and the Hanukkah story.

Tell Us About It

If you are accustomed to just following the Torah portions, with the Haftarah and New Testament passages, I encourage you to consider this more complete reading plan this year. If you have followed it in the past, please comment and let us know how it worked for you.