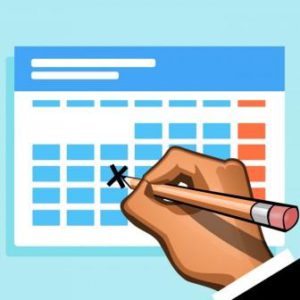 Each year I publish a calendar with two primary goals in mind. First is to list the weekly Torah Portions, which I also post over at MessianicTorahPortion.com. For this I use a traditional schedule and readings from published sources.

The second goal is to promote thinking in terms of the Biblical months. While most calendars superimpose Hebrew dates over a Gregorian calendar, this one is organized by the Hebrew months with the Gregorian dates added for reference.

Since it is focused on the Torah reading cycle, this calendar starts with the seventh Biblical month known as Tishrei. The Torah cycle begins in this month following Sukkot (the Feast of Tabernacles) at the time the Bible calls “the turn of the year” (Exodus 34:22). It is also the beginning of the civil year.

You probably already know that there is disagreement on exactly when a month begins. My calendar is based on the calendar attributed to Hillel II in the fourth century CE and revised over time. I do that for the sake of unity; you may or may not agree. Even if you begin your month a day or two different from Hillel, I hope this calendar will cause you to think in terms of Biblical months, which are based on the lunar cycle. The Torah portions should be the same.

There are some things in Jewish tradition that I have chosen not to include. For example, some of the holidays – more properly called Appointed Times – are traditionally celebrated for two days instead of one. Scripture does not support these added days. Why do they do this? The most likely reason is that in ancient times it took time to announce that the beginning of the month, based on a sighted moon, had arrived. This ensured everyone had time to be notified (a manual process) and observe the day. If that was the case, it certainly is not necessary when a fixed calendar is used and communication is almost instantaneous.

Another example is celebrating “Passover,” more correctly the Feast of Unleavened Bread (chag hamatzot) for eight days. Scripture clearly says seven days. The extra day is generally added outside the land of Israel, in the diaspora, probably for the same reasons previously mentioned regarding two-day holidays.

With those issues, the decision not to include them was pretty easy. They simply are not Biblical.

One problem is not as clear and is not so easily resolved. One of the Appointed Times does not have a fixed date in the Torah. Determining the date for Shavuot is dependent on another event and requires some counting.

And here it is in the Stone Edition Tanach:

And finally, Brenton’s translation of the Septuagint:

The “new grain” offering in this passage is made on the day of Shavuot, the Feast of Weeks (Exodus 34:22, Deuteronomy 16:10,16). No date, meaning no set day and month, is specified. It is fifty days, seven weeks and one day, after some starting point. But when is the starting point?

The day after which sabbath? While we each may have an opinion, and some of us a very strong opinion, the fact remains that this passage is ambiguous. Judaic tradition says it is the day after the High Sabbath of Passover, which is always the 16th day of the first month, Aviv (or Nisan). Some Jewish sects along with Christian tradition believe it is the day after the weekly Sabbath following Passover, the first day of the week on a date that fluctuates from year to year.

What about the end of the counting?

Does the count end following another weekly Sabbath, or does it end on the day following the seventh week after the High Sabbath? These translations each seem to be skewed toward their respective target audiences.

If the count begins on the day after the High Sabbath, it will always end on 6 Sivan (in the third month) which could be on any day of the week.  This is assuming 30 days in the first month and 29 days in the second month – or just assuming 30 days in one of the months and 29 in the other month, since a month is about 29-1/2 days. But a fixed date of 6 Sivan is not given in Scripture.

Or maybe not. Look closely – there is nothing is Scripture that says this first “weekly Sabbath” has any relationship at all to Passover. That might surprise you, but here is the passage describing the starting point, the day of the wave sheaf:

“Speak to the sons of Israel and say to them, ‘When you enter the land which I am going to give to you and reap its harvest, then you shall bring in the sheaf of the first fruits of your harvest to the priest.
(Leviticus 23:10 NASB)

That’s it – when you reap the harvest; when you put the sickle to the standing grain. There is no mention of Passover. The only thing you can say is that it is discussed after Passover in both narratives. But that only makes sense, since we are talking about harvesting grain. It is sometime between the Spring and the Fall.  The tie to Passover is based on Jewish tradition (which may well be valid).

Doesn’t the New Testament Clear This Up?

Not really. In fact, it might add to the confusion. Think of how many different scenarios you have heard presented regarding the timing of Yeshua’s final “passion” week. You may even be convinced about which one is correct. Was the “last supper” a Passover meal, or was it a teaching Seder? How could Yeshua eat the Passover at the correct time and also be the Passover at the correct time? What day of the week did the crucifixion occur? Is part of a day the same as a whole day? When was the resurrection? Was it exactly 72-hours – three days and three nights – later?

Of course, in order to make our preferred scenario correct, we have an explanation for each of these questions. But the fact remains, no actual days of the week are mentioned until you get to “resting on the Sabbath” and “early on the first day of the week” – or some other variation of the way the Greek is translated, assuming it was first written in Greek.

Scripture does not give all the details. It also does not say that the events of the crucifixion and resurrection must perfectly align with the timing of the Appointed Times in Torah for them to be “valid.” Yeshua did not have to be crucified on Passover and resurrected on exactly the day of the wave sheaf to fulfill these feasts – we have invented that requirement in our own minds.

Acts 1:3 tells us Yeshua was on this earth for forty days between his resurrection and his ascension. It does not, however, say that ten days later was the Feast of Shavuot (Pentecost). We make that assumption because, in our paradigm, Pentecost is exactly seven weeks after Easter (ooops, that’s the Roman Catholic calendar – my bad!). But read the account again in Acts 2. It never mentions the first day of the week in connection with Pentecost. In fact, Acts does not mention the first day of the week at all until a guy falls out of a window in chapter 20.

And from what I have been able to find, Jewish historians like Philo and Josephus aren’t much help in being specific to days and/or dates for Shavuot/Pentecost. Those who comment on the few things they may have said appear to do so with a conclusion already in mind.

Looking back, in the Spring of 2019 there wasn’t a problem. The High Sabbath coincided with the weekly Sabbath, so (almost) everybody started the count on 16 Aviv, the day after the Sabbath – it doesn’t matter which Sabbath. Shavuot was also on the first day of the week with both methods of counting, since they started at the same time. The previous year, 2018, was the same way so there wasn’t any problem there either, unless you took issue with whether or not it was actually the first month.

Since I’m using the Hillel calendar, I’ve also chosen to follow the Jewish method of counting the days of the Omer (wave sheaf). Well, that’s still ambiguous. I’ve decided to use the predominate method practiced today in Jewish communities. On my calendar, I will begin the count on the day after the High Sabbath, 16 Aviv, and end with Shavuot on 6 Sivan, which happens to be a Friday in 5780/2020. And when the people that I fellowship with gather on the following Sunday to celebrate Shavuot, I think I’ll probably join them.  Keeping the Feast is more important than arguing about the date.

When my calendar is complete, I will post it here and at Messianic Torah Portion.

Update:  Read about and download the completed calendar here.