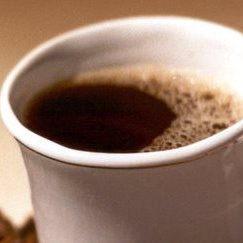 I found the love of my life in the Spring of 1991. We met in my hometown, but she was a recent college graduate who lived in the next county with her parents. So shortly after, I was invited to their home for dinner and to meet everyone.

When the meal concluded and dessert was served, I was asked if I would like coffee. Being one who enjoys coffee from the time I get up until I go to bed, I said yes – not realizing that no one else at the table drank it. My new girlfriend got up and went into the kitchen to make a pot of coffee in the drip coffeemaker. A few minutes later she brought in a cup, and we all continued the table conversation as we enjoyed dessert.

After a while, she asked how the coffee was. I was the only one at the table drinking it, and hadn’t said anything up to that point. But being that she asked, I gave an honest answer: It was very good, but it wasn’t coffee. She had unknowingly filled the filter with loose tea, not ground coffee, and not being a coffee drinker she did not notice the error.

That was many years ago, and I truly don’t remember if I just drank the tea or if she made another pot with coffee. She was probably a bit embarrassed when the mistake became known. It was a gracious act of hospitality, offering what she believed was what I wanted; but the truth was, it was something else. We look back and chuckle about it now.

Most of us have. Perhaps some of us still do.

For years, I believed I was offering my Heavenly Father what he desired. My heart was sincere, and what I did, I did out of love. I went to church every Sunday, and made a point of saying my retail business was “always closed Sunday” when listing my hours. I faithfully tithed, always read my Bible and kept up-to-date on the popular new choruses. I played in the worship band and went to all of the rehearsals. I honored the birth of Jesus at Christmas and celebrated his resurrection in the Easter Sunrise Service.

Some of those things were good, others not so much. I wasn’t aware of the origins of so many of the things I was doing in church. I didn’t know that my Father wanted me to rest in him – literally – on the Sabbath day he had created. I didn’t know that he wanted me to observe certain appointed times that revealed his plan for man centered around his son, Yeshua, who lived his life fully obedient to the Torah instructions as my example. I kept hearing people say “total abandon” and “let go,” when what God really wanted was my determined resolve to be obedient and follow him.

I was giving him hot tea
when he asked for coffee,
thinking it was coffee all the time.

It isn’t surprising that committed Christians are already keeping most of God’s Torah. Real followers of Jesus know not to lie, cheat, steal or murder. They know to care for the elderly and the poor. They sincerely desire to do what is right. They want to worship God.

When Samaria was resettled after the Northern Kingdom of Israel fell to the Assyrians, they sought to worship the God of Israel. And they did. The problem was the other things they also did, along side worship of the one true God; things they thought they could do in tandem with what God said without conflict. They were wrong.

Unfortunately similar things have happened in the Church. Things have crept into our worship that God never mentioned, and at the same time the things he’s asked us to do have been ignored. I am not suggesting that Christians are worshiping a false god, but in many ways they’ve convinced themselves they are doing the right things when it isn’t what he wants at all.

Yeshua spoke to a woman from Samaria about what God really wanted.

But an hour is coming, and now is, when the true worshipers will worship the Father in spirit and truth; for such people the Father seeks to be His worshipers (John 4:23).

It’s not so much about observing the Sabbath and Feasts, abiding by certain dietary instructions or even following the rules about relationships or what we do to our bodies. Anybody can go to a party or subscribe to some fad diet. It’s a heart matter about just doing what God says because he said it. It’s about wanting to please him. And when we know, we have to respond one way or the other. Those outward acts don’t stand on their own, they are the evidence of what is inside.

Let no one deceive you with empty words, for because of these things the wrath of God comes upon the sons of disobedience. Therefore do not be partakers with them; for you were formerly darkness, but now you are Light in the Lord; walk as children of Light (for the fruit of the Light consists in all goodness and righteousness and truth), trying to learn what is pleasing to the Lord (Ephesians 5:6-10).

Therefore we also have as our ambition, whether at home or absent, to be pleasing to Him. For we must all appear before the judgment seat of Christ, so that each one may be recompensed for his deeds in the body, according to what he has done, whether good or bad (2 Corinthians 5:9-10).

Learning – often discovering – what pleases our Heavenly Father doesn’t happen all at once. Old habits can be hard to break, especially those that bring us comfort or that we find satisfying. But God promises that if we wholeheartedly seek him, he will be found (Jeremiah 29:13), and he will bless those who do.

He will receive blessing from the LORD
and vindication from God his Savior.
Such is the generation of those who seek him,
who seek your face, O God of Jacob.
(Psalm 24:5-6 NIV)

Breaking with tradition isn’t easy. Friends and family may not understand, but then they aren’t the ones we seek to please. God’s favor is on those who “choose what pleases me, and hold fast my covenant” (Isaiah 56:4,6); those who “keep the commandments of God and their faith in Yeshua (Jesus)” (Revelation 14:12, see also 12:17).

I remember seeing a picture on a T-shirt many years ago. I suppose today it might be a social media meme of some kind. It was a drawing of several fish all swimming in one direction, with one lone fish swimming the opposite way. With the picture were the words, “Go Against The Flow.” Sometimes that’s what we need to do. Let’s give our Father what he wants.

I think I’ll have another cup of coffee, too.  My wife still doesn’t drink it.

1 thought on “Tea and Coffee”