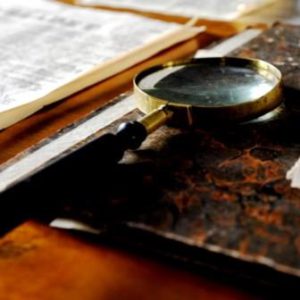 Now the eyes of Israel were dim with age, so that he could not see (Genesis 48:10a NKJV).

For I do not desire, brethren, that you should be ignorant of this mystery, lest you should be wise in your own opinion, that blindness in part has happened to Israel until the fullness of the Gentiles has come in (Romans 11:25 NKJV).

Paul, in his letter to the Roman believers, calls this a mystery. He writes this in the context of his exposition about the natural olive branches and the wild olive branches (Romans 11:17-24). Wild olive branches were grafted into the olive tree, and natural branches were broken off and then grafted back into the tree. Paul describes the mystery as this: that blindness in part has happened to Israel until the fullness of the Gentiles has come in. What does he mean?

Adam Clarke, a Methodist theologian in Britain in the generation after John Wesley, said it means:

…that the Jews will continue in a state of blindness till such time as a multitude of nations, or Gentiles, shall be converted to the Christian faith; and the Jews, hearing of this, shall be excited, by a spirit of emulation, to examine and acknowledge the validity of the proofs of Christianity, and embrace the faith of our Lord Jesus Christ.

This is a pretty common understanding in Christianity. Jews are spiritually blind and cannot see that Jesus is the Messiah. After all of the Gentiles who are going to be saved have been saved (some say this concludes with “the rapture”), then the eyes of the Jews as a whole will be opened and they will also accept Jesus. So the mystery seems to be that Jews, not individually but as a whole, won’t be saved now but in the future they will be. “And so all Israel will be saved” (Romans 11:26a NKJV).

But is that the mystery? I don’t believe it is. I think instead the mystery is found in the words Paul has chosen to use.

The word blindness in the NKJV is translated from the Greek word porosis, Strong’s #G4457. Most modern translations render it as hardening (blindness is a carryover from the old KJV). It refers to a callousness, a hardening of the heart or covering over of the eyes. This word is used two other times in the New Testament; once more by Paul in Ephesians 4:18 to describe hardness of heart among the Gentiles, and once in Mark 3:5 describing the hardness of heart among those in the Synagogue watching Yeshua as he healed a man’s withered hand.

What is it that Israel is unable to comprehend due to a partial blindness, a partial hardening of the heart? It is that the “fullness of the Gentiles” will come in. These words are the mystery to which Paul is referring. But there is another word Paul uses that we, in our modern paradigm, may also be confusing. Paul said “that a partial hardening has happened to Israel” – not to the Jews, but to Israel. They are not synonymous terms. When Paul means Jews, he says Jews, as you can verify by reading the rest of Romans. Here Paul says the hardness of heart is with Israel, and Israel is actually more than just the Jews.

The Fullness of the Gentiles

In order to understand the meaning of this phrase, we need to find other places where it is used, paying particular attention to the first time it is used in Scripture. This is often called “the law of first mention” by Bible scholars.

But the English phrase “fullness of the Gentiles” only appears this one time, in Romans 11:25. (For these searches, I am checking ESV,NASB,NKJV,NRSV,KJV,HCSB,NET,NIV,NAB,RSV,TLV,CJB,YLT). Likewise, the Greek phrase from which it is translated, πληρωμα των εθνων (pleruma tun ethnun), only appears here. In Romans 11:25 in the Hebrew New Testament, the phrase in Hebrew is מלא הגוים (melo hagoyim). Now we can make a connection and look for the meaning of this mystery. This Hebrew phrase is found in one other place, Genesis 48:19, translated as “multitude of nations.”

So let’s look at this passage in its context.

Jacob, also called Israel, has moved his family to Egypt to escape famine. Joseph is already there, having been sold into slavery and then elevated to second in command of the nation by God’s providence. While in Egypt, Joseph has married an Egyptian woman and fathered two sons. As Jacob is old and nearing death, Joseph brings his two sons to his father Jacob to receive a blessing.

In giving his blessing, Jacob tells Joseph that his two sons who were born in Egypt are to be considered as his (Jacob’s) sons – that they, Manasseh and Ephraim, are to be named among the tribes of Israel along with Joseph’s brothers. Then Jacob, or Israel as he is sometimes called, says something sort of strange.

Did he not know who Manasseh and Ephraim were? Perhaps Jacob had only heard about them but never met them. Or perhaps he just didn’t recognize them. They didn’t look like the rest of the family, like Joseph’s brothers. They were Egyptians. They lived with their mother, an Egyptian woman, and maybe with their Father also, who now looked like an Egyptian and was part of the government of Egypt. They lived in an Egyptian neighborhood, away from Jacob and the other Hebrews, because Egyptians find Hebrews to be loathsome, detestable and an abomination (Genesis 43:32).

When Israel saw Joseph’s sons, he said, “Who are these?” Joseph said to his father, “They are my sons, whom God has given me here.” So he said, “Bring them to me, please, that I may bless them.” Now the eyes of Israel were so dim from age that he could not see. Then Joseph brought them close to him, and he kissed them and embraced them (Genesis 48:8-10).

Israel was old and had difficulty seeing. Or said another way, Israel was partially blind. He could not see well enough recognize Joseph’s sons, Manasseh and Ephraim.

In blessing Joseph’s sons, Jacob intentionally crossed his arms to place his right hand, and the firstborn blessing, on the younger brother, Ephraim.

When Joseph saw that his father laid his right hand on Ephraim’s head, it displeased him; and he grasped his father’s hand to remove it from Ephraim’s head to Manasseh’s head. Joseph said to his father, “Not so, my father, for this one is the firstborn. Place your right hand on his head.” But his father refused and said, “I know, my son, I know; he also will become a people and he also will be great. However, his younger brother shall be greater than he, and his descendants shall become a multitude of nations” (Genesis 48:17-19).

Remember that Moses is the one writing these words, and he does this some time after he has led the enslaved descendants of Jacob out of the land of Egypt. He writes to a generation who would not have personally known Joseph or Jacob, and likely not Manasseh or Ephraim. In fact, the entire generation of adults who left Egypt would die in the desert. Moses is recording this story for the tribes of Israel, now a nation and which includes tribes of Ephraim and Manasseh instead of Joseph. And in this narrative, he chooses to identify the patriarch of the family as Israel rather than Jacob.  Moses wants them to know not only why Ephraim and Manasseh have replaced Joseph as a double portion among the tribes, but also what has been said of their future.

Many years later, the nation of Israel would split into two separate kingdoms. The kingdom to the south would be known as Judah, with the people called by the name “Jews.” They would eventually be taken captive by the Babylonians, then returned back to their land under control of the Persians, the Greeks and later the Romans. During the time of Roman occupation, Yeshua of Nazareth, the Messiah, would dwell on earth. He was, of course, a Jew from the tribe of Judah.

The kingdom to the north would be known both by the name Israel and also by the name Ephraim, the dominant tribe. They would eventually be taken captive by the Assyrians, but as a nation of people they would never return to their native land. Instead, the people of Israel/Ephraim were dispersed, scattered among the nations of the world. It was a fulfillment of prophecy on two points: Moses said that God would scatter them “among all peoples, from one end of the earth to the other end of the earth” (Deuteronomy 28:64), and Jacob said that Ephraim would become melo hagoyim, “a multitude of nations” (Genesis 48:19).

Paul uses this phrase from the writings of Moses to describe the mystery: that the fullness of the Gentiles, a multitude of nations, Ephraim, would come in. Into what? Back up just a few verses, and the answer is clear: the branches of scattered Ephraim would come back into the Olive Tree. And until that happens, Israel – all of Israel, including Judah (Jews) and Ephraim (the fullness of the Gentiles) – will in part be hardened, blinded to this truth.

We might ask, like Jacob, “Who are these?” Who are the fullness of the Gentiles, Ephraim? Are they a select few blood descendants of Jacob? What about the rest of us? God has already answered this through the prophet Isaiah.

Also the foreigners who join themselves to the LORD,
To minister to Him, and to love the name of the LORD,
To be His servants, every one who keeps from profaning the Sabbath
And holds fast My covenant;
Even those I will bring to My holy mountain
And make them joyful in My house of prayer.
Their burnt offerings and their sacrifices will be acceptable on My altar;
For My house will be called a house of prayer for all the peoples.
The Lord GOD, who gathers the dispersed of Israel, declares,
“Yet others I will gather to them, to those already gathered.”
(Isaiah 56:6-9)

It isn’t bloodline that determines who is Israel; it is the covenant. Paul confirms this as well.

Therefore, keep in mind that once you—Gentiles in the flesh—were called “uncircumcision” by those called “circumcision” (which is performed on flesh by hand). At that time you were separate from Messiah, excluded from the commonwealth of Israel and strangers to the covenants of promise, having no hope and without God in the world. But now in Messiah Yeshua, you who once were far off have been brought near by the blood of the Messiah (Ephesians 2:11-13 TLV).

The mystery Paul speaks of is that the fullness of the Gentiles, scattered Ephraim now found throughout the multitude of nations in the earth – and all who will join them, regardless of bloodline – will return and come back into the covenant, God’s covenant with Israel confirmed by the blood of Messiah Yeshua. These are the wild olive branches, grafted into the Olive Tree of Israel whose root is Yeshua (Romans 11:16-18). Natural branches, broken off for unbelief, are also grafted back in (Romans 11:23). In this way, Paul says, “all Israel will be saved” (Romans 11:26).

Allow the Ruach HaKodesh (the Holy Spirit) to remove the blindness as you read again Romans 11, understanding what Paul means by “the fullness of the Gentiles.”

Abba, Father, we pray for the salvation of all Israel.

For more on the Two Houses of Israel, go here.