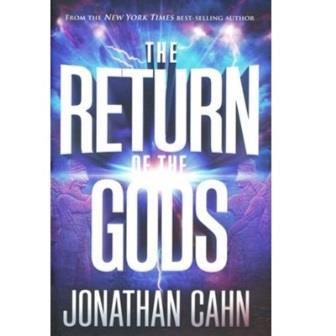 Jonathan Cahn posits that behind what is taking place in America and the world lies a mystery: The Return of the Gods of the ancient world. These are the gods that the true God, the God of Israel, warned them not to worship, and that eventually led to the downfall of the nation. According to Cahn, these gods have now returned to our modern world.

The Return of the Gods

Not too long ago such a title would have bothered me greatly. There is only one God. The one day I was singing the popular chorus, “I Exalt Thee.” That song is right out of the Scriptures, in Psalm 99. And I was singing the words, “Thou art exalted far above all gods.” Certainly Scripture acknowledges that, while there is just one true God, there are in fact many gods.

Cahn recognizes that these mythological gods are just that – mythology. But is it possible, he asks, “that the mythological worlds pf pagan worship contain connections to the spiritual realm?” He answers in the affirmative, stating early on in this book that, “when the gods or a specific god is spoken of as possessing agency, consciousness, and will, it is referring to the spirits and principalities that lie and operate behind them.”

As is typical in much of his writing, Jonathan Cahn uses the word “mystery” to describe ancient events and prophecies that he applies to modern times. Cahn views America, and specifically the United States, as an extension of ancient Israel. This is the same approach he has taken in his other books, like The Harbinger and The Paradigm.

The author considers this a logical conclusion – when God is removed, the “gods” come in. He offers warnings not only from the Bible prophets, but from the founding fathers of the United States and prominent figures from that time period. Cahn expresses that this was once a Christian nation, but this has changed.

The post-Christian state became exposed during the 1960s. Those were my adolescent years, and I grew up during those changing times. Cahn observes, “It was at the beginning of that decade that America removed prayer from public schools. The act was soon followed by the banning of God’s Word from the instruction of the nations’s children.”

He examines the change in what was permissible on television and in theaters. And, of course, the Supreme Court decision legalizing the killing of the unborn. As many others have done, Cahn recognizes this as corresponding to the ancient sacrificing of children to the god Molech. The author believes another key turning point was the Stonewall riots of 1969, ushering in the ancient goddess Ishtar.

The sad reality is that I, now officially a “senior citizen,” vaguely remember these events of the 1960s. The generations that have followed me will only know them as unexperienced history, if they know them at all. So, if Cahn is correct, the ancient gods are here, and to the current generation, it seems status quo as if they always have been here.

This is the style of Cahn’s writings, and it isn’t one I particularly like. Many people do find it effective, though. He presents his ideas in the form of a question – “Could it be that…?” or “Did the…?” or “Is it possible that…?” Sometimes he answers them directly. At other times, he proceeds as if the answer was in the affirmative. And a few times, he just leaves you hanging.

In fact, the opening chapter begins with a series of questions like this. There are more than a dozen questions asked before encountering the first non-question, “We will now embark on a journey…” Throughout the rest of the book, more questions are presented and many of them answered. I’ve been told that this approach is to make one think, but it doesn’t work that way for me. It makes me wonder what someone is up to, and why they just don’t come out and tell me what they think. After all, that is why I bought the book.

But after getting past this one annoyance, I found The Return of the Gods a very good read. Cahn offers a lot of insight into the changes I have seen over my lifetime, especially those accelerating since beginning of this millennium. And again, these are things that the current generation may think have been the status quo.

The author has broken down his material into ten parts, each part consisting of several short chapters. It is not too difficult to stop and start when other things in life come up.

The different parts cover different ancient gods, and though there is a consistent thread that connects them he pretty much sticks to the one intended to be covered. Cahn makes it easy to see how the workings of the ancient gods, or rather the spirits behind them, carry out their same thematic workings in this modern era.

Transitions from one part to the next are smooth and logical. In spite of an overuse of questions, the author writes in a way that keeps the reader interested.

Actually, it is after the last chapter. Cahn calls it the Epilogue, written after the book was officially completed. He wrote this final part on June 25, 2022, the day after the United States Supreme Court overturned Roe vs. Wade.

Again referring to the ancient god Molech and the sacrificing of children, Cahn observes that this historic Supreme Court decision came in the fiftieth year – the year of Jubilee – following the original Roe vs. Wade decision in 1973. He compares this to Biblical accounts where, while turning back to God, Israel would break down and remove the altars of Baal and Molech. He sees the altars of Molech being removed in the many states that put an end to legalized abortion and shut down abortion clinics.

The author concludes with a call to action. The overturning of the ruling legalizing abortion on demand and the tearing down of the altars of Molech could be seen as a sign of revival an return, or it could just be an anomaly. His final admonishment is that the changing of laws will fail if there is not a changing of the hearts.

The Return of the Gods

Whether or not you agree that the last several generations in America have witnessed the return of the ancient gods, or at least the spirits behind them, Jonathan Cahn brings to the forefront the evils that have in such a short period of time become commonplace and the norm in our society. The Return of the Gods is both an eye opener and a wakeup call that every believer should heed.