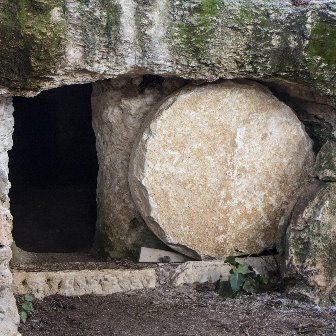 Easter in the Bible

The casual Bible reader might be surprised to find that the word Easter is not in the Bible. Oh, there is that one place in the King James Version (Acts 12:4) where the Greek word Pascha, always translated as Passover in every other of the 29 places it appears in the New Testament, is called Easter. That has been corrected in nearly all other translations. If you think “Easter” is correct in this one verse because the KJV translators chose it – well, you might as well move on and not read the rest of this post.

But what about the celebration of Easter, even if the word is never used? Well, again you might be surprised to find out there is no instance recorded in the New Testament where believers celebrated Easter – or even that they kept an annual commemoration of the resurrection of Jesus, no matter what it might have been called. The earliest known observance of the resurrection is mentioned by Bishop Melito of Sardis in the second century CE, though it may have already been a practice of some kind by early believers.

The Feasts in the Bible

There are, of course, celebrations mentioned in the Bible, both in the Old and New Testaments. The New Testament, though, doesn’t add any additional celebrations to the ones prescribed in the Old Testament.1 The Feasts of the LORD, outlined in Leviticus 23, do present a picture of God’s plan of salvation through Yeshua (Jesus). It is generally accepted that the Feasts in the Spring (Leviticus 23:4-21) were prophetically fulfilled at Yeshua’s first advent, and that the Feasts in the Fall (Leviticus 23:23-43) will be prophetically fulfilled at Yeshua’s second advent.

Passover, the Feast of Unleavened Bread, and the Waving of the Omer (also called First Fruits) are prophetic of the death, burial, and resurrection of the Messiah. Without getting into debates of specific dates, it is safe to say that Yeshua was crucified at Passover, laid in the tomb at the beginning of the Feast of Unleavened Bread, and resurrected on First Fruits. So, what does the New Testament have to say about this?

The observance of the ceremony of First Fruits is never directly mentioned in the New Testament. In fact, it is not mentioned anywhere in the Bible outside of Leviticus 23. It may be hinted at by Paul in 1 Corinthians 15 when he describes the resurrection of Yeshua:

But now Christ has been raised from the dead, the first fruits of those who are asleep. For since by a man came death, by a man also came the resurrection of the dead. For as in Adam all die, so also in Christ all will be made alive. But each in his own order: Christ the first fruits, after that those who are Christ’s at His coming, then comes the end, when He hands over the kingdom to the God and Father, when He has abolished all rule and all authority and power.

The Waving of the Omer – the wave sheaf, or “first fruits” – was a Temple ceremony performed by the Priests as the first harvest is presented, or waved, before God. Although there is quite a bit said about this ceremony in Jewish literature, it is only briefly described in Scripture in Leviticus 23:10-14. This ceremony foreshadows the resurrected Messiah presenting himself before the Father, as Paul describes in the passage above, as the first fruits of the resurrection.

Evidently Mary encountered the risen in the garden before he had ascended to the Father to present himself as the first fruits offering.

Jesus said to her, “Mary!” She turned and said to Him in Hebrew, “Rabboni!” (which means, Teacher). Jesus said to her, “Stop clinging to Me, for I have not yet ascended to the Father; but go to My brethren and say to them, ‘I ascend to My Father and your Father, and My God and your God.’”

What Did Yeshua Say To Remember?

As important as it is, Yeshua did not tell his followers to celebrate his resurrection. But he did specifically tell them to remember his death. Paul later elaborated on those instructions.

And when He had taken some bread and given thanks, He broke it and gave it to them, saying, “This is My body which is given for you; do this in remembrance of Me.”

For I received from the Lord that which I also delivered to you, that the Lord Jesus in the night in which He was betrayed took bread; and when He had given thanks, He broke it and said, “This is My body, which is for you; do this in remembrance of Me.” In the same way He took the cup also after supper, saying, “This cup is the new covenant in My blood; do this, as often as you drink it, in remembrance of Me.” For as often as you eat this bread and drink the cup, you proclaim the Lord’s death until He comes.

This “remembrance” is associated with the Passover meal at the beginning of the Feast of Unleavened Bread. Yeshua did not, himself, tie his resurrection to the waving of the first fruits or to any ongoing observance.

Easter is defined as the first Sunday after the full moon that occurs on or after the spring equinox. Surprisingly, it has nothing to do with Passover. In fact, in 2016 Easter came almost a full month before Passover. The same thing will happen in 2024 – Easter is March 31, 2024; Passover is on April 21, 2024.

Is the Old Testament ceremony of First Fruits always on Sunday? That is debated. The instructions in Torah say it is “on the day after the Sabbath” (Leviticus 23:11), but Sabbath could refer to the weekly Sabbath or it could refer to the Sabbath of the Feast. The Old Testament never refers to the “first day of the week” except in the title to Psalm 24, and even that is only in the Greek Septuagint.

We know from the New Testament that the resurrection was on the first day of the week. Should it always be memorialized on the first day of the week, Sunday? That cannot be answered from Scripture, simply because the Bible never says to memorialize the resurrection. The Westminster Confession of Faith, adopted by Reformed Calvinist assemblies in the mid 1600s, establishes this as a Biblical pattern even though there is no Biblical support.

7. As it is the law of nature, that, in general, a due proportion of time be set apart for the worship of God; so, in his Word, by a positive, moral, and perpetual commandment binding all men in all ages, he hath particularly appointed one day in seven, for a Sabbath, to be kept holy unto him: which, from the beginning of the world to the resurrection of Christ, was the last day of the week; and, from the resurrection of Christ, was changed into the first day of the week, which, in Scripture, is called the Lord’s day, and is to be continued to the end of the world, as the Christian Sabbath.

Numbers 21 recounts the story of venomous serpents afflicting the Israelites in the wilderness. As a remedy for that plague, Moses is instructed by God to make a serpent out of bronze and raise it up on a pole. As a result, all those who turned toward it and looked did not die.

Yeshua later told Nicodemus that this event was prophetic of his death.

As Moses lifted up the serpent in the wilderness, even so must the Son of Man be lifted up; so that whoever believes will in Him have eternal life.

Do you know what happened to that bronze serpent? The Israelites kept it, and we next read about it some 800 years later.

He [King Hezekiah] removed the high places and broke down the sacred pillars and cut down the Asherah. He also broke in pieces the bronze serpent that Moses had made, for until those days the sons of Israel burned incense to it; and it was called Nehushtan.

Israel had taken this good thing, a symbol of life offered through the coming Messiah, and turned it into and idol. This was done in direct violation of the commandment not to bow down to an image.

Unfortunately, Easter and Sunday have become the bronze serpents of many Christians. They have elevated the wonderful and miraculous resurrection of the Messiah, and memorialized it through Easter and Sunday, taking it to a position never authorized by our God. And this is done in direct violation of the commandment to keep the Sabbath, the seventh day of the week, holy.

The Death, Burial, and Resurrection of Yeshua

Make no mistake, I am not in any way minimizing the importance of the resurrection. But let’s get things in the proper order. God himself set the seventh day of the week apart from all others. It is to be guarded and kept holy. The first day of the week is a regular workday, even when remembering that important events happened on it.

God also established annual Feast celebrations, and on one of those in particular – Passover – we are told by Yeshua to remember him and his death. Immediately following the Passover memorial (there are no gaps!) comes the first day of Unleavened Bread, an annual Sabbath day no matter on what day of the week it falls. We can remember Yeshua’s burial as we rest from regular work on that day. Then comes the day when the Priest presented the new wave offering before God, a reminder that the resurrected Messiah Yeshua presented himself before the Father as the First Fruits of the resurrection. For the rest of us, it is a regular workday even as we remember the resurrection.

And we have a lot of work to do.

While they were eating, He took some bread, and after a blessing He broke it, and gave it to them, and said, “Take it; this is My body.” And when He had taken a cup and given thanks, He gave it to them, and they all drank from it. And He said to them, “This is My blood of the covenant, which is poured out for many. “Truly I say to you, I will never again drink of the fruit of the vine until that day when I drink it new in the kingdom of God.”

And He said to them, “Go into all the world and preach the gospel to all creation.”

1 Technically, Hanukkah is mentioned in the New Testament (John 10:22) but not in the 24 books of the Hebrew Tanakh, also known as the 39 books of the Old Testament. Hanukkah is detailed in the apocryphal books, including 1 and 2 Maccabees.