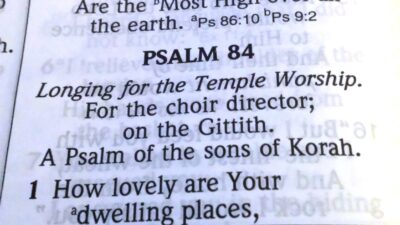 Buried in one of the census listings in the book of Numbers, in with all the names so difficult to pronounce that we usually just skim over them, is one short but remarkable sentence:

What is it that makes this so significant? We have to turn back a few pages and read the story of Korah in Numbers 16.

In a nutshell, a man named Korah along with a couple of other guys named Dathan and Abiram rounded up 250 influential people and led a rebellion against Moses and Aaron. God wasn’t too pleased with these guys, and He split the ground open under their feet. They and their families were swallowed alive by the earth, which then closed up around them before God consumed the remaining 250 leaders with a flash of fire.

When this story is briefly summarized later in chapter 26, one additional detail is added – the sons of Korah did not die. We aren’t told why they were spared from judgment. It could be they never went along with their father in the rebellion. It could be they were aligned with their father, but then realized their folly and left his group. Maybe they came out at the last minute, just as Moses commanded the crowd to “depart from them.” All we are told up to this point is that, when judgment came, “the sons of Korah did not die.”

Years later, however, we do read more about the sons of Korah. Remember, Korah was from the tribe of Levi, so his surviving descendants were assigned service duties in the congregation.

1 Chronicles 9:19 says, Shallum the son of Kore, son of Ebiasaph, son of Korah, and his kinsmen of his fathers’ house, the Korahites, were in charge of the work of the service, keepers of the thresholds of the tent, as their fathers had been in charge of the camp of the LORD, keepers of the entrance. 1 Chronicles 26:13-19 tells us of a similar role later in the Temple.

The descendants of Korah are mentioned one other place in Scripture, in the titles of several Psalms. These titles are actually part of the original Hebrew text. Out of 150 Psalms, 115 have a title, and 11 of them, according to their titles, were written by the Sons of Korah. Here are some of the more familiar Psalms:

Psalm 42:1  As the deer pants for the water brooks, So my soul pants for You, O God.

Psalm 47:1  Clap your hands all you nations, shout to God with the voice of triumph.

Psalm 48:1  Great is the LORD, and greatly to be praised.

The remnant of the Sons of Korah even looked far into the future and saw salvation and redemption in Messiah Yeshua:

Psalm 49:7-9,15
No man can by any means redeem his brother
Or give to God a ransom for him–
For the redemption of his soul is costly,
And he should cease trying forever–
That he should live on eternally,
That he should not undergo decay…
But God will redeem my soul from the power of Sheol,
For He will receive me. Selah.

Out of all of them, my favorite Psalm from the Sons of Korah is Psalm 84:

How lovely are Your dwelling places, O LORD of hosts!
My soul longed and even yearned for the courts of the LORD;
My heart and my flesh sing for joy to the living God.

Please go ahead and read the entire Psalm. It is only 12 verses long. For now, I want to draw your attention to verse 10, a very well-known passage:

For a day in Your courts is better than a thousand outside.
I would rather stand at the threshold of the house of my God
Than dwell in the tents of wickedness.

And when they drew the contrast “than to dwell in the tents of wickedness,” they only needed to look back at their family ancestry and remember how their patriarch Korah stood by his tent as “the ground that was under them split open; and the earth opened its mouth and swallowed them up, and their households, and all the men who belonged to Korah with their possessions” (Numbers 16:31-32).

What they are saying here is clear: “I would rather be in the center of God’s will, doing exactly the thing that He has for me to do, than to go off and do something else on my own, outside of His will.” The Sons of Korah were completely satisfied doing just what God had set them apart to do. There truly was no better place they could be.

We need that same attitude and that same resolve. When we seek only to be and to do what our loving Father has intended for us, there are great rewards and great promises. The Sons of Korah knew that well, and concluded this beautiful Psalm with these words:

For the LORD God is a sun and shield;
The LORD gives grace and glory;
No good thing does He withhold from those who walk uprightly.
O LORD of hosts,
How blessed is the man who trusts in You! (Psalm 84:11-12)

2 thoughts on “The Sons of Korah”