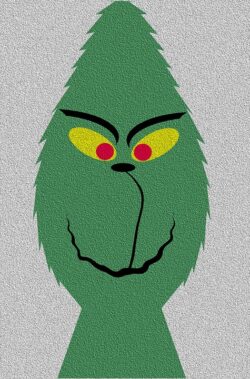 Around this time of year we seem to hear a lot about what some call a “war on Christmas.” In fact, it seems to have intensified in recent years. A store prints its holiday advertising making reference to a holiday but doesn’t call it Christmas. Perhaps they are even selling “holiday trees.” A debate arises over whether or not a nativity scene can be placed on a public property. This year I even read about how the classic “A Charlie Brown Christmas” has been banned in one place and later edited to remove any reference to the birth of Jesus.

Evidently there are stores where employees are instructed not to wish customers a Merry Christmas, though I have to say to my knowledge I have never encountered one. No doubt the reason is to avoid offending someone who may not celebrate this holiday. Happy Holidays or Seasons Greetings seems to be an acceptable alternative, but growing up I remember both of those, along with Merry Christmas, being printed on cards and decorations everywhere. What is the deal with saying “Merry Christmas?”

The Right to Say Merry Christmas

First of all, I should say that I live in the United States and enjoy freedoms that may not be prevalent in other countries. It isn’t against the law here to say “Merry Christmas” – at least, not as I am writing this. On the other hand, if my employer instructs me that, during the course of performing my duties, I am not to use that greeting with customers or clients, then I am obligated to honor his request. If I felt I could not do that, then I need to seek other employment. Of course that isn’t a one-size-fits-all rule, but in the case of a retailer who implements this policy consistently store-wide, as an employee I must comply.

I might also point out that it is not against the law to utter other religious phrases as well, for example, something like “allahu akbar.” That one might stir a lot of angst; maybe the holiday greeting “Eid Mubarak” (blessed Eid) would be a more comparable example. I certainly don’t want to be greeted this way while I am checking out at the local grocery store. Now, I haven’t had that happen but I suppose it might someday, and I would think it appropriate for the store management to instruct the checkout person not to use that greeting.

At the same time, you (at least in the United States) as a customer have the right to give the store employee whatever seasonal greeting you choose. They may or may not be able to respond.

Is All Opposition to Christmas the Same?

Actually, it isn’t. The general assumption is that the “war on Christmas” is waged because people who are opposed to any outward expression of religion, and in particular Christianity, feel their rights have been violated. Hogwash. That is nonsense, and those whining like this need to toughen up and quit wearing their feelings on their sleeve. If you don’t like what a business does, including the use of religious phrases, then don’t do business there. Still, it may be the decision of the business owner to accommodate these weak-livered people in order to increase sales and make more money.

Understand though, that there are some people who do not participate in the celebration of Christmas for reasons other than opposing all religion. Some practice a religion other than Christianity. Others are followers of Jesus who believe that Christmas is not Christ-honoring at all. Personally, I fall into this latter category. Let me explain.

Jesus, whose given Hebrew name is Yeshua, was not born on December 25. Today, most Christians know this. Some people believe this date predates Christianity and is historically associated with pagan celebrations and the birthday of the Iranian/Persian sun god Mithras, also known by various other names (Ra, Sol Invictus, etc.). Most all of the symbols, customs and traditions surrounding Christmas can be traced back to pagan practices. This is all pretty easy to confirm.

Furthermore, there is nothing anywhere in Scripture – Old or New Testament – indicating that anyone ever had or anticipated an annual celebration of the birthday of the Messiah. Nothing in the Bible ever details the event beyond the historical account given in two of the Gospels. While there are Biblically sanctioned annual celebrations, this is not one of them. It is likely this holiday first began in the church in the fourth century as a convenient Christian adaptation of existing pagan celebrations near the winter solstice and the “birthday” of the “sun.”

I believe that Scripture instructs me not to participate in pagan customs. So, I chose to abstain from observing Christmas.  That is my choice; you do not have to agree – and that is your choice.

A Call for Common Sense

I don’t say “Merry Christmas,” and it has nothing to do with any kind of “war on Christmas.” I simply do not believe it is honoring or pleasing to God, nor is it something He would want me to do. If I am out somewhere and someone wishes me a Merry Christmas, I just smile. Sometimes I say, “Thank you.” But I am not offended.

Is there a war on Christmas? I don’t know, but I doubt it. Rather, I think there is a war on Christians. We who are pursuing the Hebraic roots of our faith should be very careful that we do not join in the battle against Christmas and inadvertently wage war on Christians, most of whom sincerely believe they are honoring God in celebrating the birth of His Son. If given the opportunity, you can gently offer an explanation (Galatians 6:1, 1 Peter 3:14-15), but don’t call them “pagan.”  I have yet to meet a Christian sun worshipper.

I will not celebrate Christmas, and neither will I stop someone else from doing so. I will explain to them why I do not, and pray that God through His Holy Spirit will reveal the same truth to them that He did to me. That, I believe, is pleasing to my Father.

Glory to God in the highest, and on earth peace among men with whom He is pleased (Luke 2:14).

1 thought on “The War on Christmas”