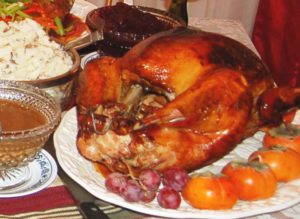 It is thrilling to discover the Biblical Holy Days and begin celebrating them. At the same time, many who study the Feasts of the Lord also come to the realization that some of the other days they have observed in the past may not really be pleasing to God. A growing number of Christians, learning of the pagan roots of major “Christian” holidays, are abandoning them.

But what about Thanksgiving? Should a true follower of Yeshua (Jesus) celebrate Thanksgiving Day? Does it also have roots in paganism? Obviously this relatively recent American and Canadian holiday is not found in the Bible, though there is some speculation that the early pilgrims may have patterned their celebration after the Feast of Tabernacles. Certainly they were offering thanksgiving to God for a bountiful harvest.

The first North American “Thanksgiving” feast was a harvest festival including the pilgrims and native Americans. Harvest festivals are common in many cultures, and this one lasted for three days. It didn’t become a national holiday in the United States until 1863, proclaimed by President Abraham Lincoln and acknowledging the “blessings of fruitful fields and healthful skies” as coming from “the ever watchful providence of Almighty God.” Lincoln entreated every American “to set apart and observe the last Thursday of November next as a day of Thanksgiving and Praise to our beneficent Father who dwelleth in the heavens.”

About a dozen times in the Hebrew Bible we read the phrase hodu l’Adonai, “Give thanks to the Lord.” Half of those include the entire refrain hodu l’Adonai kiy tov kiy l’olam chasdo, “Give thanks to the Lord, for he is good; for his lovingkindness is everlasting.” The word hodu comes from the Hebrew word yadah (Strong’s #H3034) meaning (in the hiphil stem for you scholars) “to give thanks, laud, praise” (Brown-Driver-Briggs). And, it is in the imperative form. All of that technical grammar stuff just boils down to this: it is a command. Hey, you, give thanks!

Giving thanks to the Lord usually included lifting the hands in praise. In fact, the Hebrew word for hand (yad) can be found in the word yadah. The Theological Wordbook of the Old Testament further explains that the Hebrew Bible “does not have our independent concept of thanks. The expression of thanks to God is included in praise; it is a way of praising.”

The first place we see this phrase is in 1 Chronicles 16 when David brings the Ark of the Covenant to Jerusalem. It is both the opening (verse 8) and closing (verse 34) of a psalm of praise. The next time it is used we find King Jehoshaphat leading the army of Judah against their enemies. Before his army advanced, the king put the temple choir in front of the army and instructed them, “Give thanks to the LORD, for his lovingkindness is everlasting” (2 Chronicles 20:21). When they arrived at the battle site, it was not even necessary to fight. God had already been there and caused the enemy camps to destroy each other.

The 100th Psalm, aptly titled in the Hebrew Bible as “A Song for Thanksgiving,” tells us to “Enter His gates with thanksgiving, and His courts with praise.” The Hebrew word for thanksgiving is todah (Strong’s #H8426), a noun derived from the verb yadah. This word also occurs about a dozen times in the Psalms, usually rendered as thanksgiving, and sometimes as praise in a few translations.

Psalm 42 associates thanksgiving with a festival celebration: “For I used to go along with the throng and lead them in procession to the house of God with the voice of joy and thanksgiving; a multitude keeping festival” (Psalm 42:4). The same word is used in Jeremiah 33:11 where it refers to those “who bring a thank offering into the house of the LORD.” The familiar King James Version says “bring a sacrifice of praise into the house of the LORD.” This passage is alluded to in Hebrews 13:15 where the Greek word ainesis (Strong’s #G133) is used, a word meaning “specifically, a thank offering” (Strong’s Dictionary).

Giving Thanks in Greek

The Apocrypha is written in Greek. The Greek root equivalent to Hodu, used here and elsewhere in the Septuagint translation of the Hebrew Bible, is exomologeo (Strong’s #G1843). One of its meanings is an expression of praise and thanksgiving, which we now know are inseparable. This is the word recorded in Matthew 11:25 and Luke 10:12 when Yeshua prayed, “I praise You, Father, Lord of heaven and earth…” The KJV/NKJV translates this as “I thank you, Father…”

So What About Thanksgiving Dinner?

Clearly the giving of thanks to the Lord is encouraged – even commanded – in Scripture. The Thanksgiving Day celebration in America is founded upon acknowledging the providence of God and giving thanks to Him. Unlike some of the other holidays, Thanksgiving Day has no roots in any pagan celebration. So enjoy the time with family and friends, feast on the bounty of the harvest, and remember to “always give thanks for everything to God the Father in the name of our Lord Yeshua the Messiah” (Ephesians 5:20 CJB).