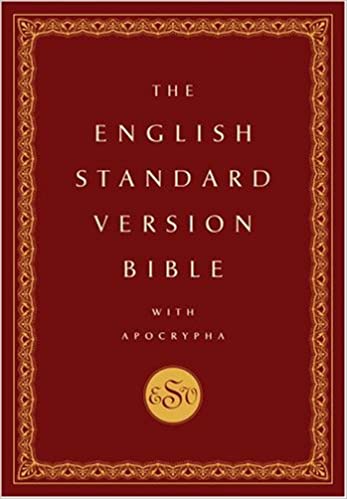 I recommend the English Standard Version Bible with Apocrypha as a great resource for Messianic readers who want the additional historical books found in the Apocrypha. The English Standard Version (ESV) is an “essentially literal” translation, categorized as “formal equivalence.” There are a number of reviews of this translation available, so I will not go into that here.

For Messianic readers, this Bible is laid out in a very easy to use format. The books of the Apocrypha are at the end, placed after the Old Testament and New Testament. Regardless of the extent to which you view these books as inspired Holy Scripture, having them separated makes them easy to find. I grew up with a 66-book Bible, memorizing the order of the books at a very young age. My first Bible with the Apocrypha was very cumbersome and had these books interspersed throughout the Old Testament. I was often unable to find them, and didn’t really want them mixed with what I regarded as canon. My second Bible with the Apocrypha put all of them in between the Old and New Testaments – better, but still hard to find and, again, I did not like them mixed with what I considered canon. This layout solves that problem.

I have long been a fan of the New American Standard Bible (NASB) for its accuracy in being true to the original Hebrew, Aramaic and Greek texts. I like its understandable style and good balance between English grammar and a literal translation of the original languages. When the Lockman Foundation updated the NASB in 1995 and eliminated the Elizabeth English (thee, thou, thy, etc.), I was very pleased.

As I began to be involved with the Messianic movement and started studying the Hebrew roots of faith, I wanted to know more about the events surrounding Hanukkah. To read those stories, I needed a copy of the books of Maccabees found in the Apocrypha. Since my NASB did not have those books, I picked up a copy of the New Revised Standard Version (NRSV).

The more I read the books of the Apocrypha, the more I enjoyed them. However, there were a few things, not many, I definitely did not like about the Old and New Testament translations in the NRSV. So, I continued to use the NASB as my primary translation, referring to the NRSV (along with a number of others) on occasion.

In 2001, Crossway Publishers introduced the English Standard Version (ESV). I owned a Christian bookstore at the time, and was impressed with the promotional literature. The “Formal Equivalence” translation philosophy followed was described as “essentially literal” and, though I liked the concept and both the accuracy and readability of the text, I chose to stick with my NASB. Crossway updated the ESV in 2007 and in 2011.

Even though this edition of the ESV with Apocrypha has been available for a few years (the copyright date is 2009), I have just recently picked one up for myself. Like the traditional books of the canon, these books in this translation are easily readable. I have to say, I love this Bible and it has now become one of my favorites.

Update:  This Bible is no longer being published and is increasingly hard to find. For the current edition of the ESV with Apocrypha, read my review of  The ESV Diadem Reference Edition. 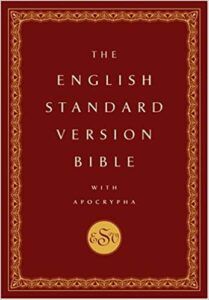