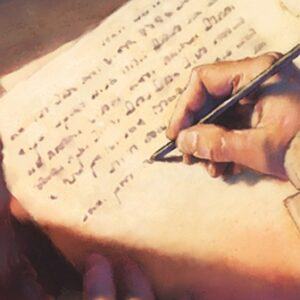 Who wrote the Bible? Perhaps that seems like an odd question. As a child growing up in Sunday School, I learned that God wrote the Bible. That was a simplistic, as well as inaccurate, statement. God, as far as we know, didn’t write anything except the Ten Commandments and maybe four words on a wall. But we call it “The Word of God,” right? So, what is this Documentary Hypothesis all about?

We should acknowledge at the start that there are no extant original autographs of any of the books of the Bible. Everything in existence today is either a copy or a translation of a copy. That includes both the Hebrew Bible, known to Christians as the Old Testament, and also the New Testament. Perhaps the oldest known copies are portions of the Hebrew Bible found in the Dead Sea Scrolls. These would date back a little more than two thousand years.

Later on in Sunday School I learned that men, inspired by God, wrote the Bible. Often their names are attached to the book. I learned that Matthew wrote Matthew, Mark wrote Mark, Luke wrote Luke and Acts, and so forth. Paul wrote the “epistles” that don’t have someone else’s name on them, including Hebrews (at least that is what the King James Version says). I also learned that the Old Testament prophets wrote the books that have their names on them, that Solomon wrote the Proverbs, and David wrote the Psalms – well, most of them.

And I learned that Moses wrote the Pentateuch – the Torah, the first five books of the Bible, the five “Books of Moses.” How much more simple or more clear could that be?

In the New Testament, Yeshua said that Moses wrote… something, presumably from the context, the Torah or the Law.

Do not think that I will accuse you before the Father; the one who accuses you is Moses, in whom you have set your hope. “For if you believed Moses, you would believe Me, for he wrote about Me. “But if you do not believe his writings, how will you believe My words?
(John 5:45-47)

The prevailing thought at this time seems to be the same.

Philip found Nathanael and said to him, “We have found Him of whom Moses in the Law and also the Prophets wrote–Jesus of Nazareth, the son of Joseph.”
(John 1:45)

Does that mean Moses wrote the Torah? Did he do it personally, or did a secretary/scribe write down what he said? Obviously Moses did not write the story of this death and subsequent events in the last chapter of the book of Deuteronomy. And it isn’t likely he wrote that he was the most humble man in all the earth (Numbers 12:3 – there are no “parentheses” in the Hebrew text). But clearly something was written down by someone.

Then Hilkiah the high priest said to Shaphan the scribe, “I have found the book of the law in the house of the LORD.” And Hilkiah gave the book to Shaphan who read it.
(2 Kings 22:8)

The Documentary Hypothesis (DH) was developed over a period of time in the nineteenth century. Simply stated, the Documentary Hypothesis posits that what we now know as the five books of the Torah – in English: Genesis, Exodus, Leviticus, Numbers, and Deuteronomy – is a compilation of four earlier document sources: Yahwist (J), Elohist (E), Priestly (P), and Deuteronomist (D). These sources were joined together and edited by Redactors (R).

This is not unlike the hypothetical “Q” source for the gospels of Matthew and Luke. The Q Source Hypothesis suggests that the first written gospel accounts were the Gospel of Mark and a non-extant document known as Q (for the German “quelle” meaning source). Matthew and Luke took material from these two and expounded on it. Luke even suggests in his opening remarks that something like this happened.

Inasmuch as many have undertaken to compile an account of the things accomplished among us, just as they were handed down to us by those who from the beginning were eyewitnesses and servants of the word, it seemed fitting for me as well, having investigated everything carefully from the beginning, to write it out for you in consecutive order, most excellent Theophilus; so that you may know the exact truth about the things you have been taught.
(Luke 1:1-4)

So it should not be thought defamatory to Holy Writ that the original writings of Moses have not survived, or that much of what is attributed to him may have first been passed down through oral tradition before being written on scrolls. That these would then have later been compiled and edited, much as Luke confessed he had done, is certainly plausible.

Since so much of this is unknown, it is understandable that many variations of the Documentary Hypothesis exists. Among these, there are common elements that help to determine where different sources may have been combined. Here are a few of the characteristics supporting this hypothesis:

Doublets –
There are parallel accounts of the same incidents that have different vantage points and are sometimes inconsistent or even contradictory. The first is the story of creation, presented in Genesis 1:1-2:3 and again in Genesis 2:4b-25. They have a different focus, and present events in a different order. The Documentary Hypothesis suggests these two accounts come from different sources – both divinely inspired, both clearly demonstrated that man is a special and purposeful creation by God. They are connected by Genesis 2:4a, “These are the generations of the heavens and the earth when they were created” (ESV).

Use of the Divine Names –
The sovereign creator of the universe is referred to by different names and titles in these source documents. Again, look at the two creation accounts. In the first one, everything is created by Elohim – God – a title related to the proper name El. In the second account, Yahweh (YHWH) is the creator. The Documentary Hypothesis suggests the first account comes from the Elohist (E) source and the second comes from the Yahwist (J) source. In Genesis 2 and 3, the redactor/editor who combined the texts added “Elohim” after the name Yahweh so it would be clear they are referring to the same divine creator. After that, the J source just reads Yahweh.

Supporters of the Documentary Hypothesis also point to differences in writing styles, the use of specific terminology or language, the incorporation of names and events that were not known in the time of Moses, and other distinguishing characteristics.

In 1895, Charles Henry Pope published The Gospels Combined. Rather than put the four Gospels in parallel columns and harmonize them, he combined them into one continuous story. But the four Gospels do not always present the same accounts in the same way. For example, Matthew 20 tells the story of Yeshua healing two blind men. The same story in Luke 18 just says there was “a blind man.” Mark 10 also tells the same story, also with only one blind man who is called by name: Bartimaeus. Here is the way Pope presents these in a single passage:

And they come to Jericho. And it came to pass, as he was nigh unto Jericho with his disciples, a great multitude followed him. And a certain blind man sat by the wayside, begging; and Bartimaeus, the son of Timaeus, a blind beggar, was sitting by the wayside. And behold, the two blind men, hearing a multitude going by, inquired what this meant.

Reading this combined, edited and redacted account by Pope, one might even conclude that there were three blind men. But we are not concerned about any apparent discrepancies, because we have the source documents – the books of Matthew, Mark, and Luke – from which this redacted and edited account is created. It is easy to go back to the source if we want, and even to disagree if we think the source has been incorrectly edited.

However, if we did not have the source we would be left wondering about seeming contradictions or we might draw conclusions not supported by the original writers. Further, we would not know that Mark says this happened as they were leaving Jericho, but Matthew and Luke describe it as happening as they entered Jericho. In fact, Luke immediately follows this story with, “And he entered and was passing through Jericho. And behold, a man called by the name Zacchaeus…”

But concerning the five books of Moses, if it is true that they were assembled, edited, and/or redacted by one or more individuals several centuries later, we do not have the luxury of referring back to the original text. Perhaps for this reason, and certainly to our benefit, the redactor has sometimes kept more than one account of an event or instruction – the “doublets.” So we can read consecutively two differing accounts of the creation story, each with their own unique details and perspective. And we can read of events during the wilderness journey that are retold with slight differences in the book of Deuteronomy.

The Bible with Sources Revealed

Richard Elliot Friedman, former professor of Hebrew and Comparative Literature at the University of California, San Diego, and currently professor of Jewish Studies at the University of Georgia, published a book in 2003 titled The Bible with Sources Revealed. A proponent of the Documentary Hypothesis – at least, one version of it – he briefly describes his process of collecting evidence in support of it. Friedman presents what he calls the seven main arguments for the hypothesis:

1.  Linguistic
2.  Terminology
3.  Consistent Content
4.  Continuity of Texts (Narrative Flow)
5.  Connections with Other Parts of the Bible
6.  Relationships Among the Sources: To Each Other and to History
7.  Convergence (Doublets and Overlapping Texts)

But what follows this and makes up most of the book, from page 33 to page 368, is the text of the Torah – the Pentateuch, the Five Books of Moses – with each of the individual sources identified through color-coding and shading. Footnotes often explain why a section is identified as a particular source, why a redactor/editor inserted a word, or where the writer is placing the focus. Sometimes the footnotes point out the difference between the source texts, primarily E and J.

Friedman also suggests a few ways to read the Bible text he presents, including reading consecutively only the parts from a selected source. I have not attempted to do that yet. This will certainly be interesting as we approach the next Torah reading cycle.

I do not endorse the Documentary Hypothesis. I do not know if it is valid, either in part or the whole. Several variations exist. However, I do recommend The Bible with Sources Revealed as a key resource.

It is important to always remember that Yahweh is the sovereign creator of everything, and to guard against the thought that he “developed over time.” That does not prohibit consideration that what we now have as sacred Scripture did, in fact, develop over time. The Bible is about the God of Israel, the Sovereign Creator, but the Bible is not God. To consider it so is idolatry. And as much as I love it, my faith is rooted in Yahweh and in Messiah Yeshua, not in Scripture.


Unless marked otherwise, Scripture quotations are from the New American Standard Bible (NASB) © The Lockman Foundation