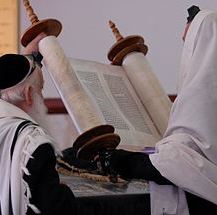 For several years now I’ve been reading the weekly Torah and Haftarah portions along with a related selection from the New Testament. Of course, I’m not the only one. Reading the Torah portions has long been a practice in the Jewish community and Messianic Judaism has continued the custom. As other Messianic and Hebraic groups have emerged, many have joined in as well.

Sadly, there are naysayers who view this and many other traditions as “religion of man.” Why would they do that? Especially, why would they speak ill about a tradition of systematic public reading of Scripture?

This book of the law shall not depart from your mouth, but you shall meditate on it day and night, so that you may be careful to do according to all that is written in it; for then you will make your way prosperous, and then you will have success.
(Joshua 1:8)

To be clear, reading the Torah is a command; reading the schedule of Torah portions is not. This is just one way to fulfill that command. It divides the five books of the Torah into 54 sections that can be read over a 12- or 13-month period, the length of the Hebrew calendar. Sometimes sections are combined because of a shorter year or the timing of Biblical feasts. For more on the calendar arrangement, go here.

So why do I read the weekly Torah portion?

It is an Ancient Practice

The New Testament confirms that this was already part of regular worship in the first century CE.

Now Paul and his companions put out to sea from Paphos and came to Perga in Pamphylia; but John left them and returned to Jerusalem. But going on from Perga, they arrived at Pisidian Antioch, and on the Sabbath day they went into the synagogue and sat down. After the reading of the Law and the Prophets the synagogue officials sent to them, saying, “Brethren, if you have any word of exhortation for the people, say it.”
(Acts 13:13-15)

Prior to the time the New Testament books were written, they were already systematically reading “the Law and the Prophets” publicly in the synagogues. Keep in mind that the average person would not have had their own copy to read, so public reading of Scripture was the norm. Yeshua himself participated in this custom. He told his followers that “he [Moses] wrote about me” (John 5:46). This point is reinforced in John 1:45, John 5:39, Luke 24:44, Acts 26:22 and more.

And He came to Nazareth, where He had been brought up; and as was His custom, He entered the synagogue on the Sabbath, and stood up to read. And the book of the prophet Isaiah was handed to Him.
(Luke 4:16-17)

According to Lois Tverberg in Reading the Bible with Rabbi Jesus,

For centuries, traditional Jewish practice has been to read the entire Torah aloud each year. Selections from the Neviim (which include both prophetic writings and historical books) are also read that fit the theme of the Torah reading. The Torah portion is called the parashah (par-a-SHAH, pl. paras,hot; par-a-SHOTE), and the reading from the Neviim is called the haftarah (haf-ta-RAH, pl. haftarot; haf-ta-ROTE), which means “completion.”

It is generally believed the custom of reading a portion of the Torah each week, completing the reading of the entire Torah in one year, and repeating the cycle the following year began following the return from Babylonian captivity. Nehemiah 8 describes Ezra the priest coordinating reading of the Torah to the returning exiles beginning in the seventh Biblical month. Nehemiah 13 indicates that practice continued. While some critical of this practice say it originated in Babylon, this is not the case. Systematic reading of Torah is an outcome of the return.

The cycle of Torah reading begins following Sukkot, the Feast of Tabernacles. Sukkot is called “the turn of the year” (Exodus 34:22) and is traditionally the time the annual reading of the Torah concludes at the end of the book of Deuteronomy. When that happens in synagogues on the day of Simchat Torah, “Rejoicing in the Torah,” the scroll is immediately rolled back to the beginning and a new cycle begins at Genesis 1:1.

As already stated, this has long been a custom in the Jewish community and now in those outside the Jewish community returning to the ancient paths of our faith. When we are all reading the same portions together, it strengthens our goal to “dwell together in unity” (Psalm 133:1). It is pretty easy on any given Sabbath to find studies and teaching on that week’s Torah portion. They aren’t all identical, redundant thoughts. We hear and read insights from a variety of viewpoints highlighting different things, but all from the passages each of us has already read.

Various churches, radio and television programs, magazines and even Bibles themselves have plans for reading through the Bible (more on this later). Small groups who follow these plans sometimes even get together to talk about what they have read, though that isn’t a frequent occurrence. Usually, if there is any follow-up, they just check to see if we’re all on schedule. Within the Catholic church there is a format for an annual cycle, and some interdenominational Sunday School curriculums seek to establish a “standard” lesson. But overall, there really isn’t anything that rivals the Torah portions.

Certainly there are variations in the Torah reading cycle. A triennial schedule, which some believe to be even older than the annual cycle, takes from three to three and a half years to complete. Another triennial pattern follows the same schedule as the annual portions, but divides each portion into three parts and focuses only on one-third of the weekly portion each year. This is a good method for study, and maintains the unity of the full schedule.

The objections I have heard to following the Torah Portion Schedule are pretty weak.

Objection: It Isn’t That Unified

As I’ve already pointed out, some follow a triennial cycle. However, the overwhelming majority of Torah readers use the annual cycle, including those who modify it to include only a third of each annual portion in each of three successive years. The reading of the Torah portions is pretty unified. There is some variation in the corresponding Haftarah portions. Occasionally, the Ashkenazi and Sephardic traditions among the Jewish people may suggest different readings from the Prophets – sometimes a different beginning or ending point in the same passage, or in a few instances a completely different passage. When that happens, a Chumash will generally include both readings.

The related New Testament portions, on the other hand, are quite varied. Since they aren’t part of the traditional Jewish readings, this is a reflection of the diversity in the Messianic community. And since this is an emerging and growing movement, I hope that over time we will settle on some standard. But the foundation is the Torah, and all of these other readings are generally thematically related to it. The pattern really is pretty uniform.

Objection: It Is Incomplete

If you are considering the volume of Scripture, this is a true statement. Following the Torah Portion cycle, you read all of the Torah – the five books of Moses – and roughly 15% or less of the rest of the Bible. That’s why I follow another reading plan concurrent with the Torah cycle. You can check out a few options in my post 5 Ways to Read The Bible In One Year. Personally, I read the Bible through every year using a translation I have never read or one I haven’t read in a while. But I do that in addition to reading the Torah portions on the same schedule as everyone else.

Hopefully, you will read the Torah portion, follow a Bible reading plan for the entire Bible, and take the time to search the Scriptures topically when you study or are listening to someone teach.

You can find the weekly Torah portions, along with Haftarah and New Testament readings, at MessianicTorahPortion.com. There you can also find a calendar that will show you future portions and upcoming Biblical feast days. These are the portions based on a traditional annual schedule beginning after the Feast of Sukkot. Haftarah for both Ashkenazi and Sephardic traditions are listed.

The New Testament portions are taken from the Walk! series of Messianic Devotionals by Jeffrey Enoch Feinberg. These are excellent books that I have used for several years, including while meeting with offenders in the Indiana Department of Corrections. You can read my review of these books here.

There are a number of other commentaries and devotionals on the Torah portions from both Messianic and traditional Jewish publishers. You may want to consider a Chumash, the collection of the five books of the Torah along with the Haftarah portions and rabbinic (NOT Messianic) commentary. Two of the most popular chumashim are The Stone Edition Chumash and The Pentateuch and Haftorahs (Hertz).

Read the words of Scripture in the Torah Portions for yourself, and always use discernment when listening to teachers and reading commentary.

How blessed is the man who does not walk in the counsel of the wicked,
Nor stand in the path of sinners,
Nor sit in the seat of scoffers!
But his delight is in the law of the LORD,
And in His law he meditates day and night.
He will be like a tree firmly planted by streams of water,
Which yields its fruit in its season
And its leaf does not wither;
And in whatever he does, he prospers.
(Psalms 1:1-3)

O how I love Your law!
It is my meditation all the day.
Your commandments make me wiser than my enemies,
For they are ever mine.
I have more insight than all my teachers,
For Your testimonies are my meditation.
I understand more than the aged,
Because I have observed Your precepts.
I have restrained my feet from every evil way,
That I may keep Your word.
I have not turned aside from Your ordinances,
For You Yourself have taught me.
How sweet are Your words to my taste!
Yes, sweeter than honey to my mouth!
From Your precepts I get understanding;
Therefore I hate every false way.
(Psalm 119:97-104)