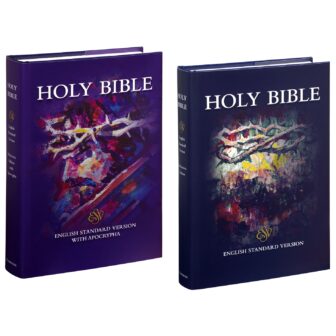 Once you’ve settled on a translation, choosing a Bible comes down to two things:

This ESV Bible review will examine the ESV Diadem Reference Edition that excels at both. Here is the ideal partnering of accuracy and resourcefulness with comfort and convenience.

The Diadem Reference Edition of the English Standard Version presents a comfortable, readable format in a compact-sized cross-referenced Bible. This review is based on the hardcover editions released November 4, 2021. Leather-bound editions are scheduled to be released in the Spring of 2022.

From the Cambridge University Press page about the ESV Diadem Reference Edition:

This is the beginning of a new family of Bibles, published first in the ESV translation.

The size of these Bibles is perfect for holding in your hands while reading. They measure 8-1/2 inches high, the standard size of most compact hardcover Bibles, but the width is 6 inches, a full half-inch wider than my other Bibles of this size. The pages themselves are about 8-3/8 by 5-7/8, making the layout just a little bit wider – wider in each of the two columns and wider in the center cross-reference column (compared to my NKJV and old ESV Reference Bibles with a similar layout). The ESV Diadem Reference Edition is 1-3/8 inches thick and the ESV Diadem Reference Edition with Apocrypha is about 1-5/8 inches thick. That’s after reading it daily for a week, which tends to make a book a little thicker.

This is a Christian Bible translation, so the format is like nearly every other Christian translation. The books of the Old Testament follow the Greek Septuagint rather than the Hebrew Tanakh, even though the text itself is based primarily on the Masoretic Text. For those who grew up in Church, this isn’t an issue. For new Messianic readers who have been using the Complete Jewish Bible, Tree of Life Version, or some other Jewish or Messianic Bible, just be aware that the book order is a little different. The numbering of chapters and/or verses in the Old Testament are also sometimes different than the Hebrew Tanakh. (The only Christian translation I have encountered with verse numbering matching the Tanakh is the New American Bible, a Roman Catholic version). Check out more on the differences here.

There are 39 books in the Old Testament1 and 27 books in the New Testament. The ESV Diadem Reference Edition with Apocrypha places the 18 books of the Apocrypha in a separate section between the Old and New Testaments. This is different than the ESV-CE (Catholic Edition) that places the Deutero-canonicals with the Old Testament books.
The Bible text is printed in two columns with a narrower center column for the cross-references. It is nicely done in paragraph rather than verse-by-verse format. At first I thought that a new Book of the Bible always began on a new page, which is nice, but when I checked each book individually I found that wasn’t always the case.

In these hardbound editions, the text is all black letter. I understand that the leather-bound editions to be released in 2022 have the “Words of Christ in red,” which is something I personally do not like. Other people may find this useful, though.
There is a presentation page, the title page, and Table of Contents including an alphabetical listing of the books. This is followed by a Preface to the English Standard Version and an explanation of the features of the Diadem Reference Edition. Then there are a couple of helpful tables with the Chronology of Rulers During Biblical Times and one with Weights and Measures and Monetary Units.

In the back of this Bible is a 90-page Concordance and a set of 15 color maps. I expected the concordance to be the same one found in the 2001 ESV Reference Bible published by Crossway Bibles, but it isn’t. This one is more extensive.

The finishing touches to this high quality binding are a full-color illustrated dust jacket and a nice ribbon page marker.

The Cross-Reference System and Footnotes

This is what makes it a Diadem Reference Edition. The cross-references appear to be the same as found in the original 2001 ESV Reference Bible. Cross-references follow the standard format of a lower-case alphabetical superscript preceding the word(s). Footnotes specific to the ESV are indicated by numerical superscripts after the word(s). One nice thing about the way this is presented in the Bible text itself is that the superscripts are small, lighter weight and italicized. They do not interfere with reading.

It should be noted that these are footnotes to the ESV text and are standard in all ESV Bibles. They are not study notes, and no doctrinal position is put forth in either of the ESV Diadem Reference Editions.

Serious Bible students in the Messianic and Hebrew Roots community are generally wanting to use literal Bible translations, and for many years have preferred the New American Standard Bible (NASB) over others. The English Standard Version (ESV) is making a strong emergence, being only slightly less literal but much more readable than the NASB. Granted, the 2020 update to the NASB is also a little less literal and more readable as well. Frankly, I like and use both of these translations. In each, the Old Testament is based primarily on the Masoretic Texts (Biblia Hebraica Stuttgartensia) and the New Testament is base based on the Critical Texts (UBS Greek New Testament and Nestle-Aland’s Novum Testamentum Graece).

The ESV follows the standard convention of rendering the divine name YHWH as “LORD” in small caps in the Old Testament. It is not forced into the New Testament, as the Greek texts do not contain it.

One of my favorite Bibles has been The English Standard Version Bible with Apocrypha published in 2009 by Oxford University Press. It gave me a translation nearly on par with the NASB that also included the complete Apocrypha as found in the RSV. The NASB from Lockman Foundation, my primary translation, does not have the Apocrypha. Physically the Oxford edition from 2009 is a little larger than I like to carry, but I used it at home and it was beginning to show some wear. Unfortunately, it is no longer in print so I could not buy another.

So, here are the additional items in this Diadem edition with Apocrypha:

I previously reviewed the stand-alone edition of the English Standard Version Apocrypha here.

A Few Issues With This Edition

First, let me say that I really appreciate this perfectly sized and complete edition with the Apocrypha. I have needed an ESV of this style, and the ESV-CE didn’t quite fill the bill. This is exactly what it says on the cover. It is an English Standard Version Reference Bible that happens to also have the Apocrypha.

The cross-references in the Apocrypha are a little bit different (and I think better) than those in the main ESV Bible. As described at the beginning of the Apocrypha,

“The cross-reference system used in the Apocrypha section differs from that of the main ESV Bible text in that it links by verse rather than individual word. Consequently no siglas are required within the text.”

Further demonstrating the the Apocrypha is just an add-on to the other edition, the 90-page concordance is exactly the same in both editions. In fact, there is no concordance to the Apocrypha or that includes passages in Apocryphal books here. For a Reference Bible, this seems to be something critical that has been overlooked.

The English Standard Version is a very good translation of the Bible, faithful to the original text in an eloquent modern style. This ESV Diadem Reference Edition is a wonderful Bible for study, offering cross-references to other Bible passages without the use of doctrinally biased study notes. The size of these two Bibles makes them perfect for study at home or to carry to a congregational meeting or other Bible study. I highly recommend the ESV Diadem Reference Edition to all Bible students, and especially the ESV Diadem Reference Edition with Apocrypha to Messianic and Hebrew Roots believers or anyone who reads the Apocrypha. An accurate, modern language translation with the Apocrypha is a much needed tool, and this one is here just in time for Hanukkah.

1 The Hebrew Bible has 24 instead of 39 books, though they comprise the same material. The twelve minor prophets are combined into one book. 1 & 2 Samuel, 1 & 2 Kings, and 1 & 2 Chronicles combined into single books respectively, as are Ezra & Nehemiah