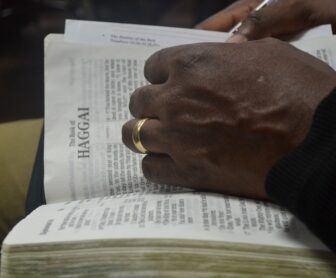 Those were the commands for the “Sword Drill” competition I remember from my childhood. At the first command we would all stand facing the drill instructor with our arms at our side, one hand holding a Bible. At the second command, we extended our arms with the Bible between our hands, careful not to let fingers or thumbs slip over the edge. The drill instructor then gave the assignment – a passage of Scripture, the name of a Bible character, or a single word. At the command “Charge” we all began searching for the assignment, and the first one to place their finger on the passage, name or word took a step forward as the winner.

To keep a level playing field, there was an “official” Sword Drill Bible for the Church denomination where I attended. My competitors and I did not have one, but we had the next closest thing – a medium sized hardcover text-only King James Version. And of course, to be competitive, we memorized all of the Books of the Bible in their proper order so we could find passages quickly. Book…chapter…verse…and a few seconds later, we were there.

Where is that book?

Now, many years later as an adult, I sometimes struggle to find a passage. You see, I have several different Bibles, and they don’t all have the same books in the same order. And occasionally, the chapter and verse references are a little different. If you have used any of the Bibles popular among Messianic and Hebrew Roots believers, you may have experienced the same problem.

Bible canons differ among various religious sects. The word “canon” derives from a Latin word, which is derived from a Greek word, meaning a rule or a standard. A Bible canon then is a list of authoritative books to be included in what we call The Bible.

So when I first learned that the Hebrew Bible, my Old Testament, only had 24 books, I wondered which were excluded. But not to worry, they are all there. Several of them have just been combined – Samuel, Kings, Chronicles, Ezra & Nehemiah, and the twelve “minor prophets.” Or would it be better to say that in my Christian Old Testament they have been separated? I don’t know.

These books of the Hebrew Bible are also in a different order, which is part of what made it difficult for me to find certain passages. The Hebrew Bible is called the Tanach or Tanakh, itself an acronym consisting of the Hebrew letters תנך (Tav-Nun-Kaph). These are the first letters of the names of the three divisions, Torah, Neviim and Ketuvim, or Law, Prophets and Writings. Interestingly, in the New Testament Yeshua himself refers to the Hebrew Bible by these terms.

Now He said to them, “These are My words which I spoke to you while I was still with you, that all things which are written about Me in the Law of Moses and the Prophets and the Psalms must be fulfilled” (Luke 24:44).

How did the Christian Old Testament get into a different book order than the Tanach? The answer probably goes back to the Septuagint, a translation of the books of the Hebrew Bible into Greek in about the third century BCE. This was possibly an attempt to put some books into chronological order. The Septuagint has the same texts, but they are organized as 39 books in the order later used in the Christian Old Testament (followed by several other Deuterocanonical and/or Apocryphal books).

Chapter and verse numbers were added much later. They cannot be found in the Hebrew or Greek text of the Tanach/Septuagint. Ancient Hebrew texts were divided into something similar to a paragraph, indicated by either a “Peh” or “Samekh” (open and closed Hebrew letters) or by variations in spacing. Much later, in the middle ages CE, the Masoretes added symbols breaking the text apart, along with vowel markers indicating how a word should be pronounced. Some “verses” can be distinguished in Hebrew poetry through the use of acrostics and other poetic forms.

Most likely, chapter and verse numberings originated in the 1551 edition of the Greek New Testament of Stephanus (Robert Estienne). Chapters themselves probably go back a few more years to the Archbishop of Canterbury in the thirteenth century CE and the Wycliff English Bible in 1382. The first use of chapter and verse in the Hebrew Bible may have been by an Italian-Jewish translator Nathan of Centro, also in the thirteenth century CE and adapted for the Geneva Bible in the sixteenth century.  But some sources suggest chapter and verse numbering in the Tanach may have originated in Christian translations. All this is just to say that these divisions are relatively recent additions. Sometimes these chapter and verse divisions can influence the way we understand a passage.

The Stone Edition Tanach, a standard Jewish text published by Artscroll Publications, illustrates this blending of chapter and verse into the 24 books of the Masoretic text. In this Hebrew text, verse numberings are in the margin and not actually shown in the text itself. In the parallel English translation you can see them in the text. When you reach the end of 1 Samuel, the text just continues into what we know as 2 Samuel. The same thing occurs with Kings, Ezra-Nehemiah and Chronicles. The Twelve Prophets have a more distinctive break between them.

Why is the Septuagint in a different order than the Masoretic texts? Some have suggested that this illustrates the difference between a Greek and Hebrew mindset, something Messianics talk about a lot. The Septuagint places Chronicles in a more chronological order, repeating a similar narrative from Kings and followed by Ezra, Nehemiah and Esther as historical records. It provides a logical sequential bridge to the New Testament, ending with this prophecy in Malachi concerning Elijah, identified by Yeshua as John the Baptist in Matthew 17:12-13.

Remember the law of Moses My servant, even the statutes and ordinances which I commanded him in Horeb for all Israel. Behold, I am going to send you Elijah the prophet before the coming of the great and terrible day of the LORD. He will restore the hearts of the fathers to their children and the hearts of the children to their fathers, so that I will not come and smite the land with a curse (Malachi 4:4-6 in the Old Testament, Malachi 3:22-24 in the Tanach).

The Hebrew book order does not have a section designated as “History.” Instead, the historical accounts are included with the Neviim (Prophets), presumably because there have been prophets throughout Israel’s history. Books that do not include prophets, such as Ezra, Nehemiah and Esther, are included with the writings. Even Daniel is included in the writings, as he wrote down his apocalyptic visions but did not actually prophesy to Israel.

In cyclical fashion, typical of Hebraic thought, Chronicles is the last book. It begins with Adam and ends with the promise of restoration following captivity. This is also an appropriate bridge to the New Testament story of salvation through Messiah Yeshua.

Many of the popular Messianic Bible translations use the book sequence and chapter and verse numberings of the Hebrew Bible. The Complete Jewish Bible (Messianic Jewish Publishers), Tree of Life Version (Messianic Jewish Family Bible Society) and One New Man Bible (True Potential Publishing) all follow this traditional Hebrew system. Selecting these links will take you to my summary of each translation.

One very popular Bible, The Scriptures (Institute for Scripture Research), uses the book order of the Tanach but maintains chapter and verse numberings of the Christian Old Testament. This is just one of the things bringing into question exactly what, if anything, is the basis of this translation. It is very confusing and I do not recommend it.

The Complete Jewish Bible is available in a parallel edition with the New International Version. Because of the parallel format, the book order follows the Christian Old Testament. Chapters and verses still follow the Hebrew numbering.

All of these translations follow the book order of the New Testament used in Christian Bibles. There have been a few lesser-known versions that attempt to put the letters in chronological order, beginning with James.

It really isn’t all that difficult to figure out, though maybe a “Sword Drill” will take a little more practice. The Complete Jewish Bible helps by showing the Christian Old Testament verse numbers in parenthesis. But the important part – the sacred text that originally was not broken down into chapter numbers and verse numbers – is where we need to keep our focus. If it takes us a little longer to get to a particular passage, that’s OK.