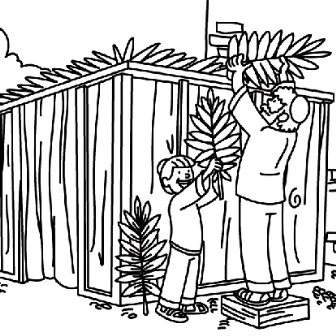 סֻכֹּת sukkot is the plural of סֻכַּה sukkah, Strong’s Hebrew word #H5521, defined in Brown-Driver-Briggs as a “thicket, covert, booth (rude or temporary shelter).” It is not a permanent structure, not even a nice portable one like an RV. In Israel, these temporary booths are erected on sidewalks, porches and patios. Meals are eaten in them, and sometimes people sleep in them.

Torah doesn’t give details describing a sukkah. The book of Nehemiah gives us somewhat of a description of how those returning from captivity celebrated, but a lot is still left to the imagination. Traditional Judaism adds several requirements as to what a sukkah should look like, but it would be hard to say they are describing what was done in ancient Israel.

They found written in the law how the LORD had commanded through Moses that the sons of Israel should live in booths during the feast of the seventh month. So they proclaimed and circulated a proclamation in all their cities and in Jerusalem, saying, “Go out to the hills, and bring olive branches and wild olive branches, myrtle branches, palm branches and branches of other leafy trees, to make booths, as it is written.” So the people went out and brought them and made booths for themselves, each on his roof, and in their courts and in the courts of the house of God, and in the square at the Water Gate and in the square at the Gate of Ephraim. The entire assembly of those who had returned from the captivity made booths and lived in them.
(Nehemiah 8:14-17)

I am not a native-born Israelite and am not required by this commandment to live in sukkot. But it is both meaningful and fun, and we certainly can do it if we want. In the past, my wife and I have celebrated Sukkot, the Feast of Tabernacles, by pitching a tent or staying in a cabin away from home with a group of other believers – something that seems to be unique to this modern movement. This year, we have decided to stay home and build a sukkah on our back patio. (Note, this sukkah is not “kosher” by Rabbinic standards, and is not intended to be so.)

Besides being a temporary structure, I had certain other criteria that I wanted for our sukkah. First, it needed to fit on my patio. It needed to be relatively sturdy and lightweight. Finally, I wanted it to be easy to assemble, disassemble, and store. Underlying this is the fact my construction skills are, at best, average.

This design is not unique. The frame is made of PVC, and there are several similar ideas found on a number of different web sites. This one is a little smaller and glued in a manner that allows easy disassembly and storage with a minimal number of pieces. It is about 6-feet by 6-feet and a little over 6-feet high (almost a cube, like the New Jerusalem). I’ve only built the frame now and we will finish it when Sukkot (the Feast of Tabernacles) arrives. When completed, it will have walls on three sides. The size could be adjusted, but if it gets larger it might need an additional vertical support in the middle of the walls.

This sukkah might not be rabbinically kosher – I didn’t check. As mentioned earlier, Scripture doesn’t give many details. The frame is 1½-inch PVC, and it has four corner assemblies, four top rail assemblies, and four bottom rail pieces. The walls will be constructed on three sides using backed vinyl tablecloths. They are lightweight and will shed water. We aren’t using cloth fabric, as the weight could pull down the PVC frame if they get wet. I will cut some branches for the top, being mindful of the added weight.

Our sukkah frame required these materials:

I started with eight 10-foot pieces of 1½-inch PVC, cutting each into a 6-foot and a 4-foot piece. Then I took the final 10-foot piece and cut it into sixteen 6-inch pieces (leaving a piece about 2-foot long left over). I decided to cut and assemble everything before applying any glue. That way I would know all of the vertical components are aligned properly. The idea was to glue one joint at a time while leaving the complete frame assembled.

Each corner consists of an “L” with a 6-inch piece on each side going to two “T” couplings. Two of these are at each corner, one at the top and one at the bottom, connected with two 6-foot vertical pieces inserted in the “T” on each side. Connect these four corner pieces with a 4-foot length top and bottom on the open ends of the “T.”

Once the whole frame is assembled, glue each joint on the bottom of the corner pieces except where the 4-foot piece connects to a “T.” Glue the vertical pieces at the bottom “T” couplings but not at the top. You will end up with four corner assemblies like this picture (don’ disassemble the frame yet, though).

The top rail assemblies are made by gluing a “T” on each end of a 4-foot piece with 6-inch pieces on the other side of each “T,” and an “L” on only one end of the whole thing (make sure to be consistent on which end has the “L”). Doing this while the frame is assembled ensures the “L” and “T” couplings stay properly aligned. You should have four pieces that look like this picture.

That’s about it. You are left with four 4-foot bottom rail pieces that don’t need anything else done to them.

Assembly is quick and easy. I stand the four corner pieces up, connect them at the bottom with the 4-foot rails, then set the top rail assemblies in place on the vertical pieces, pushing the end of each rail into the corresponding open “L” on the next rail. If you want, you can put screws in each of the non-glued joints. Drill pilot holes in the same place on each of the “L” or “T” couplings so they remain interchangeable. Blocks or other weights could be used to keep it from moving. 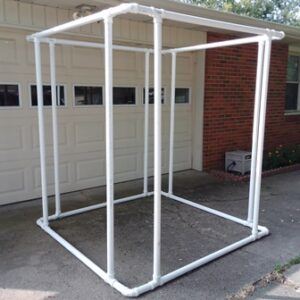 UPDATE: Here is the completed project! It is just sitting on the patio outside our back door, along with a grill, firepit, glider and a few potted tomatoes. Once the sides were installed, the wind caused it to twist a little. So I added 1×2 wood cross-bracing to the sides rails. 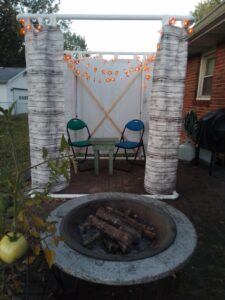 The sides themselves are made from outdoor plastic-coated tablecloths. My wife attached fabric strips with Velcro to one end so they could be looped over the top rails. I used metal clips to join them along the vertical edges, and if we want they can be tied back like curtains, which is helpful in keeping it from blowing over when it is really windy.

We strung some lights back and forth across the top. You can put branches or corn stalks over it, but as constructed there is nothing to tie them to across the middle. 1×2 wood furring strips could be used there as well. 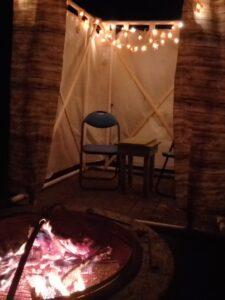 If you build this or something similar to it, be sure to comment below. Include pictures if you are able.

2 thoughts on “How to Build a Sukkah with PVC”