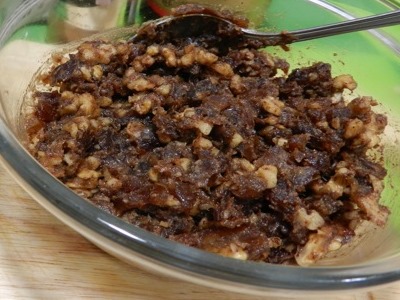 One of the fifteen steps of the traditional Passover Seder is Korech, a Hebrew word meaning “sandwich.” The sandwich is made from matzah (unleavened bread), maror (bitter herbs, usually horseradish) and charoset. Charoset is a mixture of fruit, nuts and wine forming a sticky, sweet paste intended to represent the mortar used by Hebrew slaves to build Egyptian cities.

This year I’ve seen several Sephardic charoset recipes. Most Sephardic recipes will include chopped dates, along with the usual apples, walnuts, cinnamon and wine creating a very sweet end product. Although not mentioned in Scripture as part of the Passover observance, this sweet recipe may have derived from a very sensual reference in the Song of Solomon (Song of Songs 7:8-10).

It seems to happen every year, and this year may be a little more animated than others. When is Passover? Or when is any other Biblical appointed time, for that matter. We can’t use the regular Gregorian calendar to determine the dates, as Bible holy days are completely unrelated to the calendar commonly used today. How we arrive at these dates is too often a matter of controversy.

There are many, many different calendars espoused by different religious groups. Some of them on the fringe have ideas that are so out there I am not even considering them here. We have enough problems of our own.

The Start of the Year

Now Adonai spoke to Moses and Aaron in the land of Egypt saying, This month will mark the beginning of months for you; it is to be the first month of the year for you (Exodus 12:1-2).

A quick internet search will come up with at least three or four methods for determining when the year will start. Most of the time it doesn’t matter which method we use; they all point to the same month (understanding that a month begins with the new moon that starts the lunar cycle).

But not this year. What month begins the year can be different depending on which method is used. And if we as believers seeking to follow Yeshua and Torah are starting the year at different times, when we celebrate the Appointed Times will be different as well, all year long.

The Start of the Month

The Hebrew word chodesh, Strong’s number 2320, is used three times in Exodus 12:2 above and is translated as month. Brown Driver Briggs describes it as “1) the new moon, month, monthly; 1a) the first day of the month; 1b) the lunar month.” It seems, though, that we have differing opinions on exactly what a “new moon” is, and so we have different groups of believers starting the month at different times. And that again means we celebrate the Appointed Times on different days, even when we agree on the month that starts the year

Observing the Passover on a specific day, the 14th day of the first month, should be pretty simple once we determine when it is the 14th day of the first month. But alas, this is also a point of disagreement. Since it is in the evening, and it is commonly held that there are two evenings – one that begins the day and one that ends the day – we have fellow believers celebrating Passover at two different times even when we agree on the day.

Then comes the waving of the first fruits of the harvest and the count to Shavuot, the Feast of Weeks.  Does it begin on the day after the weekly Sabbath or the day after the annual “Sabbath” that begins the week of Unleavened Bread? I put that in quotes because Torah doesn’t call the first day of Unleavened Bread “Sabbath,” even though it describes it in a similar way. Really – go look. But depending on which date we start, we would logically end on different dates.

Now, if we begin the count on the day after the weekly Sabbath following Passover it is usually self-correcting, meaning that we all end on the same day regardless of when we observed Passover. Usually, but not this year. Since Passover falls on the weekend, at least if you started the year on the earlier of the two possibilities, the “day after the (weekly) Sabbath” following Passover could be two different dates. And that means the counts are a week apart, and end on dates for Shavuot that are a week apart.

The Beginning of the Count

Not to further muddy the waters, but the Torah only mentions the wave sheaf offering in Leviticus 23:10, and the fifty-day or seven week count to Shavuot is only mentioned in Leviticus 23:15-16 and Deuteronomy 16:9. None of them say to begin right after the Passover; at best there is only an assumed relationship because of the proximity of the passages. We are only told to begin the count after harvesting the first grain. For most of us, that doesn’t help much.

When we have no clear instruction, we end up with confusion. Some of us read and study Scripture with the guidance of the Holy Spirit and a strong desire to follow the ways of our Creator and thus do have clear instruction, but that clear instruction seems to be different from one clear-instruction reader to another. In other words, we are doing exactly what is described in the passage above.

Not the sandwich Hillel, but another guy. Actually, he entered in the fourth century CE. The modern Jewish calendar has been attributed to him, even though it likely pre-dated Hillel and continued to evolve in the centuries following him. This calendar was intended for use by Jews in the diaspora, or dispersion outside the mother land of Israel, for one main purpose: Unity. That seems like a nice concept.

At a time when communication could take days, following a common calendar meant that all Jews everywhere would be observing both the Appointed Times of Adonai and the traditional Jewish observances at the same time, in common, in unity. The calendar is calculated, following a very specific set of rules, so it was possible to know the correct days then as well as hundreds of years into the future. And these calculations were based on some generally accepted definition of when the year and when the month should begin.

Sometimes, but not always.

Some of the calculations shift the days for the sake of convenience, almost but not quite the same way we (in the United States) alter the original dates for Memorial Day and Labor Day so that they will always fall on a Monday. For example, on the Hillel calendar Yom Kippur will never fall on a Friday or a Sunday, simply because it would be too difficult to end or begin a fast on the Sabbath and have two successive days where no work at all could be done. Hoshanah Rabah cannot fall on a Sabbath, when it would not be possible to carry out the traditions for the celebration. As a result, Rosh Hashanah is never on Sunday, Wednesday or Friday. The evening of Passover (Erev Pesach) is never on Sunday, Tuesday or Thursday. Pull out a Jewish calendar and you will see this is true.

If a traditional fast is on a Sabbath, the observance is simply moved to the next day instead. But you cannot change the date for the Biblical Festivals – so instead, this calendar just changes when the month starts. That way the correct date falls on a more convenient day.

So that means that the one calendar intended to bring us all together is the one calendar that we can know is definitely “off” due to these calculations prohibiting God’s Appointed Times from falling on certain days of the week.

Do we, as a community of believers, continue to do what is right in our own eyes because we must be right, even though my right differs from someone else’s right? Do we submit to some sort of rabbinic calendar authority (I don’t know if this is really authority, Biblically speaking) and all keep these important observances at the same time, knowing that at least some of the dates are mixed up? Are we to continue to divide over these things that we really do not know, or is the Spirit of Yah saying to us, “Come together, right now, over Me?”