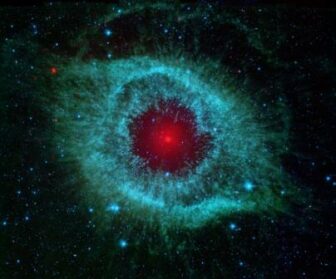 The soundtrack to the movie Bruce Almighty contains a song by the contemporary Christian band Plumb that goes like this:

And every heart, and every soul
and everybody’s got a God-shaped hole.

I really thought that the phrase “God shaped hole” originated with one of the early Christian saints or the church fathers, but in my research I was unable to confirm that. The earliest reference I could find was from the 20th century French novelist and philosopher Jean-Paul Sartre, who pointed out that “modern culture has a God-shaped hole in it.” The idea, of course, is that there is a void within human existence that can only be filled by the Almighty.

Many, perhaps most human beings will never allow that void to be filled, or will attempt to fill it with some sort of vain substitute. A well-known modern day philosopher1 put it this way:

Father Abraham sang a different tune. This week’s Torah portion tells us that at the end of his life, “Abraham breathed his last and died in a ripe old age, an old man and satisfied with life; and he was gathered to his people” (Genesis 25:8).

That’s actually the fulfillment of a promise we read ten chapters earlier in Genesis 15:15, when God told him, “As for you, you shall go to your fathers in peace; you will be buried at a good old age.”

The Hebrew word used in Genesis 25:8 is from the word saw-bay’-ah (Strong’s #H7649). It means to be satiated, satisfied and full. The Amplified Bible renders it this way: Then Abraham’s spirit was released, and he died at a good (ample, full) old age, an old man, satisfied and satiated, and was gathered to his people.

We read the same thing said of Isaac in Genesis 35:29, “Isaac breathed his last and died and was gathered to his people, an old man of ripe age; and his sons Esau and Jacob buried him.”

1 Chronicles 29:28 tells us David “died in a ripe old age, full of days, riches and honor; and his son Solomon reigned in his place.”

All of these men died “full, satisfied and satiated.” Why? Because they knew Adonai in his fullness. According to Proverbs 19:23, “The fear of the LORD leads to life, So that one may sleep satisfied, untouched by evil.”

Let’s take a closer look at the Greek word that corresponds to our Torah passage in Genesis 25:8 concerning Abraham. In the Septuagint, the Greek translation of the Tanach (Old Testament) that is often quoted in the New Testament, the Hebrew word saw-bay’-ah is translated by the Greek word play’-race (Strong’s #G4134). It means replete, or covered over; by analogy complete. This describes Abraham the same way the Hebrew does – he was “full of years, complete, satisfied.”

So, where else is this Greek word used? Where else does it tell us of people who were “full, complete, and satisfied?” Look for the word “full” or play’-race in each of these passages:

Luke 4:1 – Jesus [Yeshua], full of the Holy Spirit, returned from the Jordan and was led around by the Spirit in the wilderness

Acts 7:55 – But being full of the Holy Spirit, he [Stephen] gazed intently into heaven …

I think I can see a pattern forming. Can you?

Strong’s dictionary tells us that play’-race comes from the root word pleh’-o (Strong’s #G4130). It’s another form of the same word, just like “full” is another form of “filled.” Here are a few places we can find this root word in the Greek New Testament:

Acts 2:4 – And they were all filled with the Holy Spirit…

Luke 1:41 – When Elizabeth heard Mary’s greeting, the baby leaped in her womb; and Elizabeth was filled with the Holy Spirit.

Luke 1:67 – And his father Zacharias was filled with the Holy Spirit, and prophesied…

Acts 4:8 – Then Peter, filled with the Holy Spirit, said to them…

Acts 4:31 – And when they had prayed, the place where they had gathered together was shaken, and they were all filled with the Holy Spirit and began to speak the word of God with boldness.

Acts 9:17 – So Ananias departed and entered the house, and after laying his hands on him said, “Brother Saul, the Lord Jesus, who appeared to you on the road by which you were coming, has sent me so that you may regain your sight and be filled with the Holy Spirit.”

Acts 13:9 – But Saul, who was also known as Paul, filled with the Holy Spirit, fixed his gaze on him…

Yeshua confirmed what the Tanach tells us – that God is Spirit (John 4). To be filled with the Holy Spirit is to have your life and your very being saturated with the presence of Adonai. That is life to the fullest, the same thing Yeshua promised us in John 10:10 when he said “I came that they may have life, and have it abundantly.” That is having the god-shaped hole in your life filled with the only one who can, in fact, fill it.

Scripture never describes Abraham as being “filled with the Holy Spirit.” In fact, the word spirit – ruach (Strong’s #H7307) – never appears in the Torah narrative about the life of Abraham, Genesis chapters 11 through 25. But the evidence is clear when it records his epithet. The prophets called Abraham God’s friend (Isaiah 41:8), and Torah says Abraham died satisfied.

Now on the last day, the great day of the feast, Jesus stood and cried out, saying, “If any man is thirsty, let him come to Me and drink. He who believes in Me, as the Scripture said, ‘From his innermost being shall flow rivers of living water.’” But this He spoke of the Spirit, whom those who believed in Him were to receive (John 7:37-39a).

Drink, be filled and be satisfied.