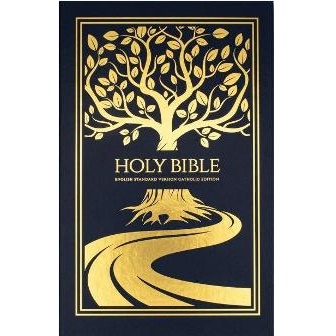 The English Standard Version (ESV) has become one of the most highly regarded Bible translations for both its accuracy and readability. It was first published by Crossway, a publishing ministry of Good News Publishers, in 2001. Subsequent updates were made to the text in 2007, 2011, and 2016. This is normal with any Bible translation as language is refined and ancient texts are better understood. Even readers of the King James Version aren’t using the original 1611 edition – they are reading texts updated in 1769.

The English Standard Version is described by the publisher as an “essentially literal translation of the Bible in contemporary English.” No useable English translation would be word-for-word literal, something that would be nearly impossible to read. A more accurate categorization in order to compare it to other translations would be “formal equivalent.” Nearly all publishers agree that the New American Standard Bible (NASB) is the most literal English translation (though in my opinion the NASB 2020 update is slightly less so). The ESV is a little less literal and probably a little more readable. On a scale of “literalness” it is comparable to the New King James Version (NKJV) but from an arguably better source text.

Unfortunately, the 2009 ESV with the Apocrypha is no longer available. I’m not sure why, but the joint effort between Crossway, the ESV Publisher, and Oxford University Press, publisher of the Apocrypha, did not continue.
UPDATE: Please check out the new ESV Diadem Reference Edition with Apocrypha.

Now the English Standard Version Catholic Edition (ESV-CE) has been published which includes some (not all) of the books of the Apocrypha. More correctly, the ESV-CE includes the “Deuterocanonical” books. Unlike the previous edition, these books from the Apocrypha that are considered as “second canon” by the Roman Catholic Church (RCC) are placed in the Old Testament text just as they are in other Scriptures approved by the RCC. Even though this is the ESV text, it is not published by Crossway; it is published by the Augustine Institute.

Messianic and Hebrew Roots believers may be uncomfortable with the name English Standard Version Catholic Edition. We shouldn’t be. This is just a name on the cover and title page, behind which is one of the best English translations of the Old and New Testaments along with Jewish historical books like 1 & 2 Maccabees and Jewish poetry like Sirach. The ESV Bible text is far superior to other options that include the Apocrypha such as the NRSV or (heaven forbid) the Eth Cepher.

How is the ESV-CE Different?

You may be wondering what “changes” were made to the ESV text so that it will be acceptable to the RCC. Unfortunately, neither Crossway nor the Augustine Institute has published a list of terms or verses that were changed. In fact, most of the descriptions I have been able to find simply say that the difference between ESV and ESV-CE is the Deuterocanonical books.

I have only recently obtained my copy and have not read the entire book. A complete reading for me isn’t in the immediate future, as right now I am comparing side-by-side the entire New American Standard Bible (NASB) 1995 and 2020 updates. I have printed ESV texts from 2001, 2007, and 2011 with access to the 2016 text digitally. After looking at several passages, including many of those identified as Catholic hot-spots, I’ve found only one variation between the ESV 2016 and ESV-CE:

I’m not sure if that is even significant. The New American Bible (NAB), the most widely used Catholic translation, has “Hail, favored one,” while the KJV, NKJV, and NIV all have “highly favored.” The ESV-CE does not include the words “blessed are you among women,” a phrase added to the Textus Receptus and included in both the KJV and NKJV, and the “Hail Mary” Rosary prayer (but not NAB).

There may be other differences, but I haven’t found them yet. According to the Augustine Press, the most significant change is a new translation of Tobit. I have read Tobit in the ESV-CE alongside the 2009 ESV with Apocrypha. The ESV-CE is considerably more descriptive in many passages and in some places has additional verses.
UPDATE: For additional comments about Tobit, read my review of the ESV Apocrypha.

Here are some thoughts for Messianic believers to consider with the ESV-CE:

I would have preferred to have the latest ESV text with the full Apocrypha of the RSV/Septuagint, separated from the Old Testament, similar to what was published in 2009. (UPDATE: see the new ESV Diadem Reference Edition with Apocrypha.) However, the target audience is Roman Catholic and the RCC rejects some of those books while fully integrating others. Still, I find the ESV-CE to be a great resource for Messianic and Hebrew Roots believers. I highly recommend it for your library.