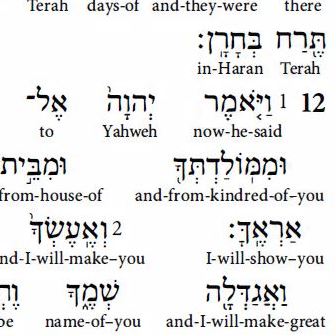 Those of us in the English speaking world read our Bibles as translated for us from the original ancient languages. Unless we are fluent in another language, English is the only real option. Often our ties to the original languages of the Bible are references written primarily in English. Here are a few of the most popular:

Another useful tool for studying Scripture based on the original languages is an Interlinear Bible. “Interlinear” means that something is written or printed between the lines of text. An “interlinear gloss” is a book having the same text in different languages printed on alternate lines, and an Interlinear Bible is an interlinear gloss of the Scripture text. Specifically, a Hebrew-English Interlinear Bible has both the Hebrew and English text of the Hebrew Bible on alternating lines of the same page, generally with the corresponding English words written directly below the Hebrew texts. Likewise a Greek-English Interlinear New Testament will have Greek text with the corresponding English words below it.

Many of us have Bibles with both Hebrew and English, either on facing pages or in parallel columns. The Israel Bible, the JPS Hebrew-English Tanakh, Aramaic-English New Testament, and the Stone Edition Chumash or Tanach are a few examples. These are parallel bilingual editions, but they are not interlinear. The Hebrew text and English text are not on alternating lines.

Here are a few popular Interlinear Bibles to consider:

There is one particular issue to note with Hebrew-English interlinear text. Because the primary text (Hebrew, a Semitic language) is written right-to-left, and English is written left-to-right, it can be tricky to follow the English text. In addition to the directional issue, often it takes several English words to translate one Hebrew word. Here is an example illustrating how the English looks below the Hebrew text. In this example (from the Hebrew-English Interlinear ESV Old Testament) the multiple English words required to translate one Hebrew word are connected by dashes. The English words or groups of words are read in order from right to left. Remember also that the English text is a literal translation of Hebrew, in the same order as the Hebrew words, and therefore is very awkward. This is one reason why no readable English Bible translation is perfectly literal.

This interlinear Bible says the Hebrew Old Testament is the Masoretic Text, a broad classification of several similar Hebrew texts. The Greek New Testament says it is the Textus Receptus, or Received Text, with some “departures.” This is a Byzantine family text, the source text for the King James Version as opposed to most modern English translations. The English below the Hebrew and Greek is a literal translation by Jay P. Green. In a column to the side of the interlinear text is an English text, reading nearly identical to that below the Hebrew except for some word order formatting. It is called A Literal Translation of the Bible (often abbreviated LITV) and is also available by itself.

The order of the books of the Hebrew Bible (Old Testament) is the same as found in most Christian Bibles, as is the verse numbering.

Besides the Masoretic Text in Hebrew and the English translation, this interlinear Bible displays numbers over the Hebrew (and Greek) keyed to Strong’s Concordance.

The print in Green’s Interlinear Bible (Green) is very small and, at least in my copy and in other copies I have seen, somewhat poor quality. I have to use a magnifying glass with this book. Vowel pointing in particular is difficult to see even with the magnifying glass. The page width is 8-1/2 inches. The sample below including both the English column and the Interlinear column is only half the page – there are two of these on each page for a total of four columns, so you can see how tiny the text is.

The New Testament looks very similar except, of course, that both the Greek and English read left-to-right.

The main advantage of Green’s Interlinear Bible is the Strong’s numbers. For a lot of people, that is enough to overcome any negative aspects, especially if you disagree with me as to how “negative” they are.

But for me, the negatives are pretty strong. First of all, as a senior citizen who wears trifocals, the print is just way too small and too poor in quality – even when using a magnifying glass. Green uses Jehovah for the divine name rather than Yahweh; I would have expected something published in the 1980’s to be more up-to-date. And since I rarely refer to the King James Version, I prefer an interlinear based on an Alexandrian family text.

The English Standard Version (ESV) from Crossway has become one of the most highly regard Bible translations in modern time. These two volumes have interlinear texts of the Old Testament and New Testament, respectively, along with a side column of the corresponding ESV text. I will limit most of my observations to the Hebrew English Interlinear since I do not own a copy of the Greek English Interlinear.

The Hebrew text is the Biblia Hebraica Stuttgartensia (BHS) 5th edition, a Masoretic-based text. The Greek text is Nestle-Aland’s Novum Testamentum Graece (NA28), an Alexandrian-based text. Both are highly regarded. BHS 5th edition is the basis for the ESV Old Testament, while the ESV New Testament draws from both the UBS 5th edition and NA28. Both the ESV OT and NT consider other texts as necessary.

The order of the books and the numbering of the verses matches the English Standard Version and most other Christian Bible translations.

The layout of the Hebrew English Interlinear ESV OT is clean and spacious, with one wide column of large interlinear text and one narrow column of the ESV English text. Underneath the Hebrew text is a literal translation, awkward to read directly (which is not the purpose). Comparing it with the parallel ESV text allows the reader to see the original word order and how it is changed to make the English readable as well as some of the idioms.

For example, the literal translation underneath the Hebrew of 2 Samuel 6:7 says, “and-he-became-hot nose-of Yahweh against-Uzzah and-he-struck-down-him there the-God because-of the-error and-he-died there with ark-of the-God.” That is the order of the words and of the construction of Hebrew words that need more than one English word to translate. The ESV reads, “And the anger of the LORD was kindled against Uzzah…” with “anger…kindled” better conveying in English the meaning of the literal “hot nose.” (Hebrew, a very pictorial language, represents the abstract anger by the concrete flared nostrils.)

The Hebrew English Interlinear ESV OT has relatively large, uncluttered, and easy to see print. It appears that the Greek English Interlinear ESV NT follows suit, though again I don’t actually have one. The Greek text is (in my opinion) superior to the TR used in Green’s Interlinear. The English, whether the awkward literal translation or the well-flowing ESV, is modern up-to-date usage. If you have a basic knowledge of Hebrew and can recognize some of the roots and word forms, you will appreciate this book. When I need to look up one of the words by the Strong’s number, I consult another resource (usually digital).

If you prefer a New Testament interlinear corresponding more to the King James Version, consider the Greek to English Interlinear by George Ricker Berry.

The Schottenstein Interlinear series is not a complete Tanach (Hebrew Bible). Currently the interlinear Scriptures from Artscroll consist only of the Chumash (the five books of Moses, the Torah) and Tehillim (the Psalms). The Stone Edition Chumash, also from Artscroll, says that it uses Mikraos Gedolos (Midraot Gedolot, the Great Scriptures) as its text. The only thing I could find regarding the text for this interlinear edition was this somewhat vague note on the title page:

The Hebrew text, punctuation and format, the new translation, commentary, instructions, prefatory and associated textual contents and introductions – including the typographic layout, cover artwork, and ornamental graphics – have been designed, edited and revised as to content, form and style.

The Chumash is available as a single volume or as five individual volumes for each book of the Torah. The Interlinear Tehillim (Psalms) is a separate volume. The Schottenstein Interlinears do not have an English translation other than what is in the interlinear text. The English appears in most cases to match that of the Stone Edition Chumash/Tanach. Besides the Bible text, the Interlinear Chumash has all of the rabbinic notes (not in interlinear format) as found in the Stone Edition Chumash. Verse numbering matches the traditional Hebrew Bible.

The Apostolic Bible Polyglot (ABP) is an interlinear Old and New Testament in Greek. The ABP Old Testament is the Septuagint (LXX) but does not include any of the books of the Apocrypha. The New Testament appears to be a compilation of various Greek texts. I couldn’t find anything in my printed copy that specified any single source.

The ABP is an Greek-English interlinear that also includes Strong’s numbers. This presents a problem in that there are some words in the Greek Septuagint that are not found in the Greek New Testament on which the Strong’s system is based. The publisher has done an excellent job working these in among related words.

I am not at all familiar with Greek, so having an interlinear Septuagint keyed with Strong’s numbers is a great resource. When used alongside a Hebrew text, it is possible to determine what Greek word was used to translate the Hebrew word, and then to find that same Greek root word in the New Testament.

The pages of my printed copy are about 7-inches wide, and there are two columns of interlinear text on each page. There is no separate English text. Even though the print is small, it is much clearer than Green’s Interlinear. Since both the Greek and English read left-to-right, the English interlinear text is easy to follow. In instances where word order is awkward in English, the editor uses small superscript numbers to order the English so it makes sense.

The print edition offers the complete Old Testament and New Testament interlinear texts, an English-Greek index, and a Lexical Concordance. Again, these are particularly helpful because they cover both the Old and New Testaments in Greek. Print editions of the ABP can sometimes be found at Amazon, and is always available from the publisher at www.apostolicbible.com. The publisher also offers a free download of the interlinear text in PDF format.

Interlinear Bibles are available in some higher-end software. I am still using my BibleSoft PC Study Bible from almost twenty years ago. Probably the most popular software package with interlinear capability is Logos. BibleWorks is no longer available.

The ever-popular — and free — e-Sword does not have an interlinear Bible (at least as far as I know). There are some modules in both Hebrew and English or in Greek and English, including the Apostolic Bible Polyglot, but they are not true interlinear formats. Various apps are available for Android devices, and though I don’t own or use Apple devices, they are probably available there as well. The MySword Bible app for Android has the Hebrew Interpolated Study Bible in a true interlinear format. Interlinear Bibles can also be found online at sites such as biblelhub.com.

Links presented in this post will generally take you to the product offered at Amazon. Once there you can read reviews that may be very different from mine. I encourage you to do so, though I do not endorse them