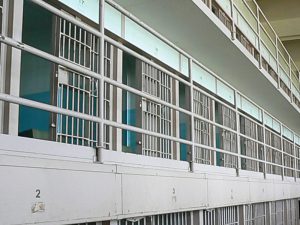 It is Sabbath morning and in just a few minutes I will be meeting with my regular group for an in-depth study of this week’s Torah portion.  Everyone has already read it, taken notes and jotted down some thoughts and questions that we will share with each other.

Before I head toward where the others are, I stand with my arms out and feet spread as an officer pats me down.  Then an electrically operated iron gate opens, I walk through and it closes loudly behind me before another one in front of me can open.  It, too, clanks loudly when it closes, and then yet another one swings open as a control operator in an observation room remotely releases the latch.  Beyond four more locked doors, a K-9 officer will escort me across a yard to another building where I will pass through two more remotely operated locked doors.  There I find my study companions with their Bibles and notes, dressed in their khaki jump suits and seated around a cold metal table.  We are ready to pray and get started with this week’s study.

Sound intimidating?  Maybe it is a little, but these guys really look forward to this meeting.  We are in a loud common area with concrete floors and walls and a hundred or more other men going about their morning routine.  A mezzanine surrounds us with two levels of several dozen numbered steel doors.  In a couple of hours, I will go back out the same way I came in.  They won’t do that for a long time – years from now.  Instead, at the conclusion of our study they will go through just one remotely locked door into a room of less than a hundred square feet.

Remember the prisoners, as though in prison with them (Hebrews 13:3).

Yes, my friends and study companions are incarcerated in the Indiana Department of Corrections.  Somewhere, sometime they did something that landed them here serving out a sentence.  Or, maybe they didn’t – I never ask.

I am challenged every time we meet.  These guys really dig into scripture and always have a ton of questions about what they have read.  They have lots of time and few resources.  I don’t always have the answers, and that requires me to research and study when I get back home.

More than twenty years ago, when Promise Keepers was popular, a member of our local group got into some trouble and ended up in the county jail.  After a few times of trying to conference him in via telephone for the weekly meeting, someone came up with the idea of meeting in the jail instead so that he could participate.  That lasted for a while, but as time went by the Promise Keepers group fizzled out.  Only one local pastor and I continued to go in weekly for a Bible study.

One morning after I had prayed to close the meeting, one of the offenders (the official term for the incarcerated person) came up to me and identified himself as a “Hebrew Christian.”  He had noticed that I prayed in the name of Yeshua rather than in the name of Jesus.  We developed a friendship, and as he moved on from county to other state facilities, we continued to keep in touch.  Around the same time, a couple of other offenders in our weekly meetings moved to other facilities and we also kept in touch, often with me visiting them.  Then someone associated with our local Messianic congregation was arrested, convicted and incarcerated.  I visited with him and kept in touch as he moved through the system.

Through these individual offender contacts, all of which have since been released and moved on, my name became known to the various chaplains.  On a few occasions when the chaplains encountered an offender who kept Sabbath or had some other “strange” religious practice they thought was similar to mine, they called on me to come in.  Of course, I know this was all the guiding hand of our Heavenly Father working his will for these gentlemen.

As I write this, I am now going into just one facility on a weekly basis.  That changes from time to time.  At this facility, we have a “Messianic Jewish” meeting (for DOC purposes, it is necessary to label the group with a recognized religion) in the Chapel every other Friday.  Any offender at the facility who lists this label as his religious preference is permitted to attend the service.  I take the guys through a regular Sabbath liturgy, have them come up and read the weekly portions from the Torah, Haftarah and New Testament, and we worship in song as I play one of the chapel guitars that is very much in a state of disrepair.

On alternate weekends, I go directly into the unit as I described at the beginning of this post.  I am a volunteer in this “faith-based” unit, but don’t let that name fool you.  Faith could be anything – Christian, Muslim, Native American, Wiccan – even some form of a Hebrew religion (there are several).  Usually three or four men will gather around our table to discuss the Torah readings for around two hours.  I need to leave before they are sent back to their cells for a routine count.

Feast Days are a real delight in prison.  At one facility we had a Passover seder, and I was permitted to take in the whole thing – grape juice and matzah, charoset, horseradish and parsley as well as a beef brisket, mashed potatoes, green beans, peaches and some chocolate covered matzah toffee for dessert!  My wife helped me prepare it all, but she wasn’t allowed to go in with me.  One of the offenders who had been incarcerated for twenty years since the age of seventeen had never eaten peaches before.  Mind you, these were just sliced peaches out of a can, but to him they were a truly a treat.

Other facilities haven’t been as liberal, but we still make do and celebrate as best we can.  One time we were gathered in a small room for Yom Teruah (Rosh Hashanah), and one of the offenders spotted the new moon through a window.  We persuaded a guard to let us step outside to see it, and for a brief (and not very loud) moment I blew a shofar while ten offenders worshiped our creator.

Every facility is just a little bit different, but the men are very much the same.  Many of them remember religious experiences when they were young children – some Christian, some Jewish.  Realizing where they are now, a lot of offenders seek some sort of redemption.  A few actually seek a real relationship with God, and these are the ones who are committed to our Torah study.

What You Can Do

Check with a facility near you.  If there is a chaplain, let him or her know that you want to volunteer.  Like it or not, you may need to assume a label.  In my case, it is Messianic Jewish.  Don’t worry, it is just a label.  I have met with offenders who’s background is Jewish, Seventh Day Adventist, Assembly of Yahweh, Protestant Christian, Catholic, Church of God (i.e., Armstrong) – it doesn’t matter.  They are here now with a desire to learn about God’s instructions.

Offer to do a Bible Study with a small group, or perhaps to conduct a service in the chapel if there is one.  Try to keep it small and specific, so the offenders will be encouraged and more likely to participate.  If there is a chaplain, get to know him or her.  Many county jails have volunteer chaplains from local churches, and you may be able to meet with them off-campus to find out their needs and let them know you are available.

Correspond with an offender.  I have received lengthy letters filled with interesting observations and thoughtful questions about Scripture, traditions and application.  Be prepared for obstacles as you get started, and try to find out the specific rules for the facility.  In at least one facility in my state, all incoming letters are copied and then the copies forwarded to the offender.  He never sees my original letter because, believe it or not, writing paper can be a vehicle for getting illegal substances into the facility.  Many states allow you to communicate with an offender through email using JPay.com, including the ability to send greeting cards and videos.

Here are two things to consider if you choose to correspond with an offender.  First, if possible get and use a Post Office Box.  This way, your physical address is not known to the offender you correspond with, and more importantly, to other offenders who may see the correspondence.

Second, under no circumstances should you correspond with someone of the opposite gender.  The reasons should be obvious, no matter your intentions.  Do not do it.

Ministering – being a friend and mentor – to those in prison who are seeking the truth of a relationship with the Giver of the Torah is a rewarding experience.  These are men and women who have more time now to pray and study than they will ever have when they are free, but they need the support of those willing to share and help them on this journey.

If you have experiences in this area that you wish to share, feel free to leave them in a comment below.  May you be blessed as you seek to bless others in the name of Yeshua.

You may also be interested in this post from a few years ago, Why I Hang Out With Criminals.