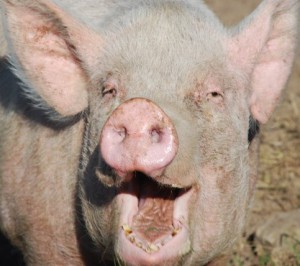 Sometimes those new to the Messianic movement or a Torah-obedient lifestyle face a dilemma when it comes to eating. You know that God has established in the Torah (the books of the law written by Moses) what animals can and cannot be eaten, yet well-meaning friends (and others) are telling you that the New Testament changed all that. They seem to have Scripture passages saying that whatever you want to eat is “clean” and proving the “food laws” either no longer apply or never did apply to non-Jews.

I wrote previously about Peter’s vision in Acts 10, showing that this vision was about people and really had nothing at all to do with what is eaten. Following that post, I was asked about another passage which does indeed discuss eating. So, I will look at that passage and a couple of others to determine what New Testament writers have to say about eating things the Torah calls “unclean.”

And He said to them, “Then are you also without understanding? Do you not see that whatever goes into a person from outside cannot defile him, since it enters not his heart, but his stomach, and is expelled?” (Thus He declared all foods clean.) (Mark 7:18-19)

There is a sentence here that is rendered in many translations as a parenthetical phrase: Thus he declared all foods clean. When Matthew relates this same story (Matthew 15:16-17), he does not include this sentence. This comment appears to have been inserted either by Mark or a later writer.

As always, in order to understand what is being said we must look at the context. We are reading a response by Yeshua (Jesus) to religious leaders who had observed that his disciples had not performed a ceremonial handwashing before eating. These were rules and regulations created by the religious leaders but not found in the Torah.

Had the disciples been eating something forbidden by the Torah as unclean, surely that would have been pointed out by these religious leaders. What has happened here, just as we see years later in Peter’s vision which we have already examined, is that something God has said is “clean” for food has been considered by these religious people to be “unclean” because it has been handled improperly – in this case, touched by hands that were not ceremonially washed. Yeshua pretty much calls this nonsense.

The writer, whether it be Mark or someone else, explains that Yeshua “declared all foods clean.” Simply put, food does not become unclean due to the lack of some ceremonial act. It is important to note, however, that it is “food” that Yeshua declares clean. The use of the term “food” indicates the item in question is something permitted to be eaten. Things that are not permitted to be eaten, such as meat from a pig, are not called “food” in the Bible.

Therefore let no one pass judgment on you in questions of food and drink, or with regard to a festival or a new moon or a Sabbath. These are a shadow of the things to come, but the substance belongs to Christ. (Colossians 2:16-17)

Paul wrote his letter to the Colossian believers, non-Jewish people – “Gentiles” (Colossians 1:27) – who had now come to faith in the Messiah. Having previously practiced pagan customs in this city of the Roman Empire, Paul warned them not to allow anyone (i.e., their former associates in paganism) to pass judgment upon them now that they were observing the Biblical commandments regarding diet, festival celebrations and the Sabbath day. Interestingly, these are still the same three things that seem to outwardly distinguish those in our movement today.

I know and am persuaded in the Lord Jesus that nothing is unclean in itself, but it is unclean for anyone who thinks it unclean. (Romans 14:14)

Again, the context is critical. Two things about eating are addressed here – eating meat versus being vegetarian (Romans 14:2-4) and fasting versus not fasting (Romans 14:5-6, by the way this has nothing to do with the Sabbath day). The reason for being vegetarian was because the meat may have been offered to an idol (see 1 Corinthians 10:28-31) causing some to consider it unclean. This portion of Paul’s letter focuses on whether or not eating offends a brother or sister in the faith.

There are several other passages throughout the New Testament similar to these. By looking at the context instead of trying to make one verse stand alone to defend what we wish it said, it becomes clear these do not change the commands of the Torah regarding what may and may not be eaten. In fact, there is no New Testament passage anywhere that discusses the clean and unclean animals described in Leviticus 11 and Deuteronomy 14.

It is notable that when God gave the commands regarding clean and unclean animals, He did not specify a penalty for disobedience. No one was to be stoned to death for eating swine. No sacrifice was required because someone ate a rabbit or a mouse. The only thing mentioned is that someone who touched the carcass of an unclean animal was considered unclean for the rest of the day (see Leviticus 11:24 and other passages).

Although I do not endorse this Christian teacher, here is a video that I find quite interesting.

What happens if I consume something unclean as if it were food? For one thing, it is generally unhealthy – God knows what He is doing. It has been suggested that eating pork will not send you to hell, but it might get you to heaven a lot sooner. That opens up an entirely different topic that I will not get into here. The bottom line? If I eat something God said not to eat, I live with the knowledge that I have disobeyed the commands of my Father and have not been pleasing to Him. The Ruach Hakodesh (Holy Spirit) convicts of sin and leads me to repentance, which means I turn from my own way and return to my Father’s ways.

The real issue here is the motive of the heart.