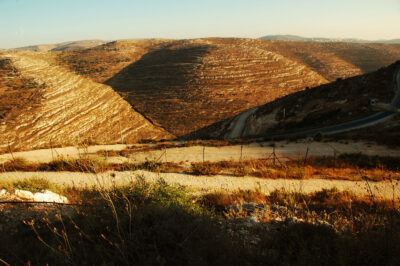 Psalms 120 through 134 are known as the Psalms of Ascents. They were songs sung by the children of Israel as they made their way up the hills and into the city of Jerusalem for the three annual pilgrimage feasts: the Feast of Unleavened Bread, the Feast of Weeks (Shavuot) and the Feast of Tabernacles (Sukkot). Psalm 121 may likely have been sung early in the procession, outside Jerusalem with the city in full view as they walked.

I will lift up my eyes to the mountains;
From where shall my help come?
My help comes from the LORD,
Who made heaven and earth.

There are differing views as to the meaning of the first verse, though nearly all commentaries acknowledge that the Hebrew structure of the phrase “from where shall my help come” is a question. Many think that the author is looking toward the hills of Jerusalem, and using the question to reinforce the answer in the next line, “My help comes from the LORD.” Others have suggested he is looking at the hills of the countryside, filled with bandits and wild animals, and asking “Where will I find help?” Either interpretation is plausible, and does not change the end result: “My help comes from LORD.”

As the children of Israel sang this Psalm of Ascent, they were on their way into Jerusalem to celebrate one of Yahweh’s festivals, celebrations He gave them when he brought them out of Egypt. Each of the festivals was to call to remembrance how He had kept them in the past, and to know prophetically that He would keep them in the future. And as we celebrate Hanukkah, even though it is not one of the commanded festivals, we still pray “Blessed are you, Oh Lord our God, who has kept us alive, sustained us, and brought us to this season.”

As we read this week’s portion we find Israel not ascending the hills of Jerusalem, but descending down into Egypt. Joseph has revealed his identity and the divine providence of God, who has supplied the means to deliver Jacob and his family from famine. Joseph recognizes that what was originally meant to divide the family has been used by God to both preserve and unite them once again: “I am your brother Joseph, whom you sold into Egypt. Now do not be grieved or angry with yourselves, because you sold me here, for God sent me before you to preserve life. For the famine has been in the land these two years, and there are still five years in which there will be neither plowing nor harvesting. God sent me before you to preserve for you a remnant in the earth, and to keep you alive by a great deliverance. Now, therefore, it was not you who sent me here, but God” (Genesis 45:4-8).

Even before they were written, the words of Psalm 121 have been true:

Behold, He who keeps Israel
Will neither slumber nor sleep.

Jacob was 130 years old when he made the move to Egypt. Remarkably, all of his children and nearly all of his grandchildren were alive and made the trip. From the first generation, “He who keeps Israel” was at work. God was with them, as he promised Jacob, “I am God, the God of your father; do not be afraid to go down to Egypt, for I will make you a great nation there. I will go down with you to Egypt, and I will also surely bring you up again” (Genesis 46:3-4).

Our Father has continued to be the One who keeps Israel. The word translated “keeps” in Psalm 121 is shomer (Strong’s #H8104) which, according to the Theological Wordbook of the Old Testament, means “to keep, guard, observe, give heed…the basic idea of the root is to exercise great care over.” God exercises great care over Israel. He has kept her through good times and bad. He has kept her through captivity and return. He kept her during his own dwelling among us as Messiah Yeshua, and has called out a true and faithful remnant “to follow in His steps” (1 Peter 2:21).

Israel (Jacob) and his sons left their home and settled for a while in Egypt, and there – as promised – God made him “a great nation.” His promise to Israel was “I will go down with you to Egypt, and I will also surely bring you up again.” In the same way, as Israel has been scattered to the nations, God is with her and will surely bring her up again, along with a multitude of “companions.”

The word of the LORD came again to me saying, “And you, son of man, take for yourself one stick and write on it, ‘For Judah and for the sons of Israel, his companions’; then take another stick and write on it, ‘For Joseph, the stick of Ephraim and all the house of Israel, his companions.’ Then join them for yourself one to another into one stick, that they may become one in your hand… Behold, I will take the sons of Israel from among the nations where they have gone, and I will gather them from every side and bring them into their own land; and I will make them one nation in the land, on the mountains of Israel; and one king will be king for all of them; and they will no longer be two nations and no longer be divided into two kingdoms. “They will no longer defile themselves with their idols, or with their detestable things, or with any of their transgressions; but I will deliver them from all their dwelling places in which they have sinned, and will cleanse them. And they will be My people, and I will be their God” (Ezekiel 37:15-23).

I don’t know exactly where I fall into the mix – Judah, Ephraim, or companions. But I do know that I have heard the call and turned to follow the One who keeps Israel, who neither slumbers nor sleeps. And for those who do so, the remainder of this Psalm is a beautiful promise and a personal blessing.

This is huge.  Stay tuned – there is more to come!