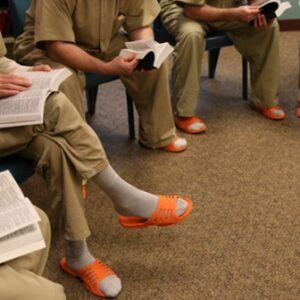 This week our meeting in the prison Chapel room was a bit of a challenge. With some of the men being transferred to another facility, we are now down to just four guys, and they are not always regular in attendance. There could be a number of reasons for that, and I might not ever know exactly why. I’ve heard that within the corrections system here the minimum number for a sanctioned group is supposed to be five. The future of this group could be uncertain.

So much is different now because of the precautions taken to limit the spread of COVID-19 within this concentrated confined campus. We don’t greet each other with handshakes or even fist bumps. There is no physical contact. And we all wear facemasks. It doesn’t matter whether or not I think they are effective, if I want to participate this is the requirement. And my ability to minister to these men is much more important than my pride in refusing this benign piece of cloth over my mouth and nose.

Another precautionary rule is that each man can only be a part of one group meeting in the Chapel. This means those in our group have made the decision that they want to be here rather than in another group, where previously they might have been able to participate in both. It also means that some who no longer have their preferred group available may decide they want to join with us. We will need to adjust to these changes without compromising our Messianic focus on Yeshua.

After I got back to the Chapel, it turns out only two guys showed up. Our scheduled start time is 8:00am and we have two hours together. At this campus the walkways between buildings, such as the dorm units and the Chapel, are only “open” for about ten minutes. Once the walks are closed, I know that no one else will be joining us. This was it – two guys. Well, three if you include me. I was immediately reminded of the words of Yeshua:

“For where two or three have gathered together in My name, I am there in their midst.”
(Matthew 18:20)

Of course, I have learned that the way most people use this verse is not at all what it means. The context of this passage is discipline within the assembly (Matthew 18:15-20). The reality for my situation is that even if no one had shown up, and if I had stayed in that room in the Chapel waiting for the next time the walks were open, I could have worshipped there in the presence of Yah all by myself. It doesn’t require two, or three, or ten (a minion), or fifty others. Still, this passage was encouraging to me now.

We spent a few minutes talking informally, and one of the guys who had been a regular attendee before the COVID shutdown mentioned the upcoming Fall Feasts. In the past, we’ve often been able to get together at these appointed times and do some special celebrations. I remember one year bringing in honey and apple slices on Rosh Hashanah. It actually caused a little trouble, because I invited the Chapel assistant (an inmate) to join us, not realizing that what I had brought in was only approved for the guys in our group. It was a sobering reminder that these men do not enjoy the freedom I have outside the facility.

This year, though, there won’t be any additional celebrations outside this once-weekly two-hour meeting at our regularly scheduled time. The COVID response rules do not allow me to come in more than one day a week and the time is not flexible. So in the upcoming weeks we will discuss observing these Feasts, and it will be up to the men to do it on their own to the best of their ability within the limitations that they find themselves.

I got out my guitar and we began our service with the Ma Tovu, then sang a few of the songs from the song sheets I had printed up last week. Nearly all of them have Hebrew lyrics in them, and most of them are taken directly from some passage of Scripture. So we paused between songs and looked them up in our Bibles. I think it is important that we learn the source of these words.

These two were pretty quiet, though they were singing most of the time and were always following along with the lyrics on the sheets. Maybe I just couldn’t hear them over my guitar and my own voice. After about 20 minutes or so of singing, we continued with the Liturgy. Now I could hear them quite clearly. I love how they find this so meaningful.

We approached the nine o’clock hour, and one of the two guys would be leaving for another obligation. He is one who was a regular attendee in the past. Before leaving, he requested that I chant the Aaronic Benediction over them, something I would normally do at the end of our time together. This is always a very precious part of our service, taken from Numbers 6:24-26 and Jude 24-25. The walks were opened, and he left. No one else joined us.

So for the final hour, I was one-on-one with a gentleman that I first met two weeks ago when we were finally permitted to meet again. That is a rare opportunity to get to know these guys, especially since I’m no longer able to go back into the dorm unit.

His story isn’t unlike others I have heard – a life controlled by alcohol and drugs since his youth. Prison offers them a chance to turn things around. A few take advantage of that gift. Will this gentleman be one that truly commits to a life following the example of our Messiah, as a servant to others and in obedience to the instructions of the Father? God only knows, and I hope to be a small part of it.

This Torah-obedient lifestyle is completely new to him. He has been a part of Christian meetings off-and-on but was looking for something more, something that would challenge him to apply what the Bible said. So what brought him here to this group in the Chapel? It was the witness of one of the other guys as they were working at the shop in the facility. Isn’t that the way it is supposed to work?

“You will receive power when the Holy Spirit has come upon you; and you shall be My witnesses both in Jerusalem, and in all Judea and Samaria, and even to the remotest part of the earth.”
(Acts 1:8)

That was my third week back inside the prison walls following COVID-19 bringing a halt to volunteer activities. Each week has been different. I don’t know what next week will bring, but I am looking forward in anticipation.