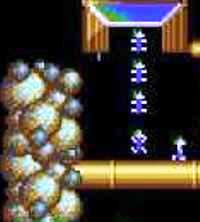 When I first got a computer, I remember spending hours playing a game called Lemmings. Lemmings are little rodents that have a tendency to move in groups, and are known for walking en masse into the sea and drowning. The point of the game was to march these little creatures into a cave by clearing a path for one to follow. Then one by one, they followed the leader to their destination. Unfortunately, they followed the leader no matter where he went – off a cliff, down a hole or into other various hazards.

It is easy to laugh at these poor critters in an animated computer game. Too often, though, we find this to be a real-life scenario. Both as adolescents and as adults, peer pressure is a tough force to deal with. In this week’s Torah portion Mishpatim we have a directive from the Father, given as part of his instruction to us, his children: “You shall not follow the masses in doing evil” (Exodus 23:2).

Psalm 1 proclaims a blessing upon those who heed these instructions.

How blessed is the man who does not walk in the counsel of the wicked,
Nor stand in the path of sinners,
Nor sit in the seat of scoffers!
(Psalm 1:1)

The influence and pull of the people we call our friends is a force that we cannot take too lightly. We tend to imitate those we associate with; we adapt to their actions and methods, use their terminology, and even start to pick up their accent. Following the crowd is comfortable and inconspicuous. But Yeshua (Jesus) warned against getting caught up in following the crowd, as did Paul. “The gate is wide and the way is broad that leads to destruction, and there are many who enter through it” (Matthew 7:13). “Do not be conformed to this world” (Romans 12:2).

It is not enough just to not do something. Idle time, lack of purpose and indifference leave us with no direction and multiply the temptation to follow the crowd. Indeed, “where there is no vision, the people are unrestrained” (Proverbs 29:18). But in our Father’s great mercy, each of these admonitions recorded in Scripture is followed with further positive instruction on what to do instead of following the crowd. Even this often quoted passage from Proverbs tells us the proper “vision” and purpose in our walk, though we all too seldom hear anyone quote the remainder of the verse: Where there is no vision, the people are unrestrained, but happy is he who keeps the law” (Proverbs 29:18).

The opposite of aimlessly following the whims of the crowd is to instead find complete satisfaction in following Yeshua, the Living Word. God’s commands and instructions for righteous living lead to contentment and peace. There is joy walking in the footsteps of the Messiah. The first Psalm continues with this same thought and calls it a delight.

But his delight is in the law of the LORD,
And in His law he meditates day and night.
(Psalm 1:2)

To meditate, as described in this verse, has a somewhat different meaning than we commonly think. The Hebrew word hagah (Strong’s #H1897) means to make a quiet sound such as sighing or moaning, and to contemplate something as you repeat the words. “In Hebrew thought, to meditate upon the Scriptures is to quietly repeat them in a soft, droning sound, while utterly abandoning outside distractions. From this tradition comes a specialized type of Jewish prayer called davening, that is, reciting texts, praying intense prayers, or getting lost in communion with God while bowing or rocking back and forth” (from the Spirit-Filled Life Bible

on Psalm 1, Jack W. Hayford, general editor, page 753). The margin note in the Spirit Filled Life Bible gives an alternate reading for the word “meditates” as “ponders by talking to himself.”

What we choose to fill our minds with will determine whether we stand firm or follow the crowd. When Paul said “do not be conformed to this world,” he completed his thought by adding “but be transformed by the renewing of your mind” (Romans 12:2). The same writer also said, “Set your mind on the things above, not on the things that are on earth” Colossians 3:2). Our minds must be focused on Yahweh’s instruction and on the lifestyle he calls us to as exemplified in Messiah Yeshua. “Therefore everyone who hears these words of Mine (Yeshua) and acts on them, may be compared to a wise man who built his house on the rock. And the rain fell, and the floods came, and the winds blew and slammed against that house; and yet it did not fall, for it had been founded on the rock” (Matthew 7:24,25).

He will be like a tree firmly planted by streams of water,
Which yields its fruit in its season
And its leaf does not wither;
And in whatever he does, he prospers.
(Psalm 1:3)

And what the Psalmist has said, Yeshua has confirmed: “But seek first His kingdom and His righteousness, and all these things will be added to you” (Matthew 6:33).