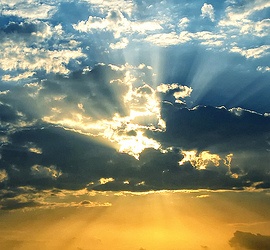 Psalm 68 is a song of triumph. It was either an original composition by King David or assembled by him from other psalms he composed. It could have been written for the moving of the Ark to Jerusalem, or after some military victory. Possibly it was written on one particular occasion and used to celebrate victory on numerous other occasions. The phrase in the Hebrew title “for the choir director” indicates it was for some form of public performance.

and those who hate Him flee His presence.
As smoke is blown away,
so You blow them away;
As wax melts before the fire,
so the wicked are destroyed before God.
But the righteous are glad;
they rejoice before God and celebrate with joy.
(Psalm 68:1-3)

The first lines of this Psalm are taken directly from the account of the Israelites leaving their encampment at Sinai in this week’s Torah portion Beha’alotcha, where God had given the covenant of the Ten Commandments.

Now in the second year, in the second month, on the twentieth of the month, the cloud was lifted from over the tabernacle of the testimony; and the sons of Israel set out on their journeys from the wilderness of Sinai. Then the cloud settled down in the wilderness of Paran…
Then it came about when the ark set out that Moses said,
“Rise up, O LORD!
And let Your enemies be scattered,
And let those who hate You flee before You.”
When it came to rest, he said,
“Return, O LORD,
To the myriad thousands of Israel.”
(Numbers 10:11,12,35,36)

As the Ark was brought to the Temple at its dedication, Solomon used a similar expression found in 2 Chronicles 6:41 and in Psalm 132, one of the Psalms of Ascents sung during the Feasts at the Temple.

Arise, O LORD, and go to your resting place,
You and the ark of your might.
Let your priests be clothed with righteousness,
and let your saints shout for joy.
(Psalm 132:8,9 NASB)

Here in Psalm 68 and Numbers 10 there is contrast drawn between the almighty God and his enemies. God arises. His enemies scatter. But more importantly, as the Spirit of Yahweh arises, there is joy among the righteous ones. They rejoice and celebrate before the LORD just as David did as the Ark ascended to the Temple in Jerusalem.

The rendering of verse 4 differs among the various translations. Many, like the Holman Christian Standard Bible used here, read that God rides on the “clouds” or “heavens.” Others translate the Hebrew (from Strong’s #H6160, arabah) more literally as “desert.” The Septuagint renders the phrase “that rides upon the west.” Specifically, the word refers to “the low region into which the valley of the Jordan River runs near Jericho” (Hebrew-Greek Key Word Study Bible). Regardless, the One who is “riding” at the beginning of this Psalm is clearly identified by name as Yahweh.

“Prepare the way of the LORD in the wilderness! Make a level highway in the desert for our God” (Isaiah 40:3). All of the Gospel writers identify John the Baptist as this one preparing the way for Messiah Yeshua (Jesus). Even in His first advent on the earth, Yeshua is Yahweh riding across the desert, and as He arises, His enemies scatter. “The seventy-two returned with joy, saying, ‘Lord, even the demons are subject to us in your name!’ And he said to them, ‘I saw Satan fall like lightning from heaven’” (Luke 10:17,18).

Verse 33 of this Psalm is more defined in its interpretation. A different word, shamayim (Strong’s #H8064), is used which clearly means “heavens.” This word is used twice in succession, literally “heavens of heavens,” and has been translated as the “ancient heavens.”

Look, He thunders with His powerful voice!
Ascribe power to God
His majesty is over Israel,
His power among the clouds.
(Psalm 68:34)

Here at the end of the Psalm it is once again Yahweh riding on the clouds. This might also be Yeshua in His second advent, King of Kings and Lord of Lords, arising as His enemies scatter. “And I saw heaven opened, and behold, a white horse! The one sitting on it is called Faithful and True, and in righteousness he judges and makes war… He is clothed in a robe dipped in blood, and the name by which he is called is The Word of God. And the armies of heaven, arrayed in fine linen, white and pure, were following him on white horses. From his mouth comes a sharp sword” (Revelation 19:11-15).

God, You are awe-inspiring in Your sanctuaries
The God of Israel gives power and strength to His people.
May God be praised!
(Psalm 68:35)

Behold, He comes,
Riding on the clouds,
Shining like the sun at the trumpet call;
So lift your voice,
It’s the year of Jubilee,
And out of Zion’s hill salvation comes!
(Robin Mark, “Days of Elijah”1996)